After an even dozen posts about my building of the farmhouse at Goff Brook, I think I'm just about ready to call it done. Having finally ginned up the courage to weather it, all that's left to do is plant it in the layout - which I'll hopefully get around to soon. Just want to build a garage for it first and see how the scene will lay. And like the layout generally, in one sense it'll never be "done" - there will always be more detail I can add (figures, stuff in the yard, etc) - but it is now at least at a "level of done-ness" that I'm comfortable moving on to other things.

After my conduit calamity, I consulted the prototype photo much more closely to help guide my weathering effort. I wanted to depict a decently-maintained rural house (i.e. no peeling paint effects, etc.) that happens to be right next to the railroad during the Steam Era (in my case, Autumn 1948).

Given that the prototype photo was just taken a couple weeks ago though (i.e. not the steam era), I used it primarily as a guide for weathering the roof. I weathered the rest of the house assuming that, with it being white, coal soot from home heating and passing locomotives would make the paint a bit dingy, with some streaking from rainfall.

Having never weathered a building before, I didn't know whether to use chalks, pan pastels, or washes. I've gravitated towards dry media for my freight car weathering and weathering the one bridge I've done so far, but Bill wisely suggested I practice on a scrap piece of clapboard first.

It may have been the unpainted (raw plastic) nature of the scrap I used, but the chalks and pastels didn't really give me the effect I was looking for, so I tried the traditional india ink wash. Good thing I was working on scrap - it came out WAY too dark. I then opened a bottle of Hunterline Weathering Mix I'd picked up at Springfield a few years ago but hadn't used yet, figuring the light gray would give a subtler effect. 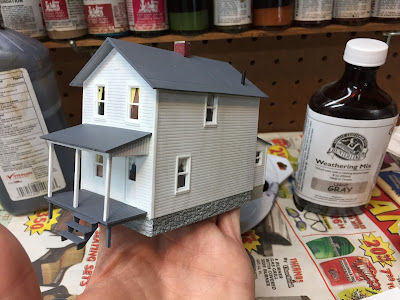 I used a soft-bristled brush to streak the wash vertically on the walls - holding the house upside down so that the wash would tend to collect a little under the clapboards, highlighting them. Like with most weathering, I'm discovering that you really need to be patient and not do too much at once. While you can wipe off some of the excess, it's much better to build up the effect gradually. The key is to know when even "just a little bit more" would be too much. And that 6th sense only comes with practice.

So I practiced on the side of the house that will face the backdrop :) and worked my way around to the other, more visible sides. I also used the wash around the stone foundation to make it "pop" a bit more.

After getting the walls about where I wanted them with the wash (and I still wondered whether I went just a bit too heavy), I decided to add some powders and pastels - especially on the roof. 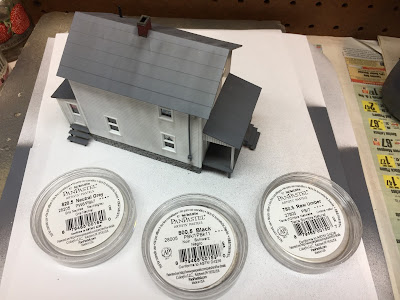 The three main pastels I used were Black, Neutral Gray, and Raw Umber. The black went on pretty heavily as soot around the top of the chimney, and as mold & soot streaks down the roof and walls. I used the gray to "sun beat" (lighten) the roofs a bit and add some contrast (and also lighten any black that was too black). The raw umber was just used sparingly here and there for some additional contrast & mud splatters. I also used it with the gray to weather the "wood" porch floor.

And here's the finished product - suitably sooty, but hopefully not as bad as a coal country company house... 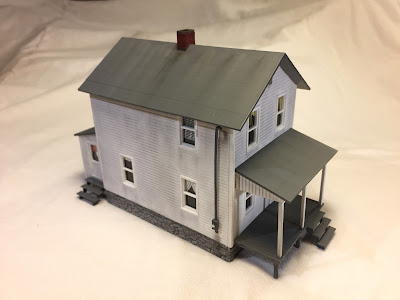 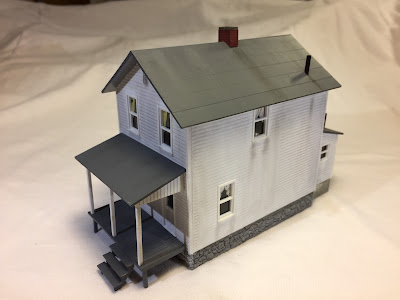 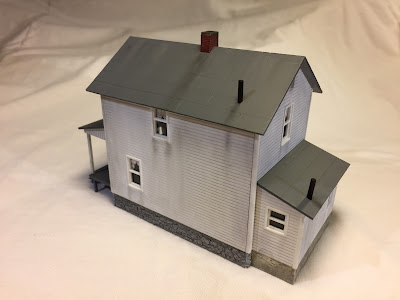 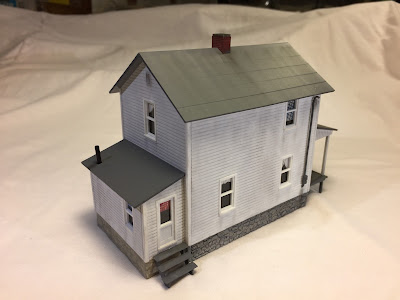 And here it is (temporarily) in place on the layout . . . 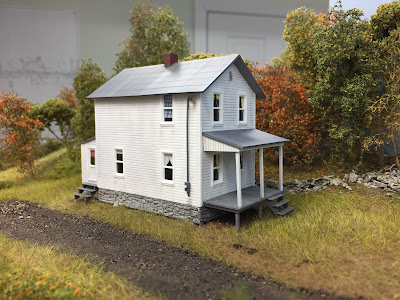 Unfortunately, the bright lights reflect a bit off the roof, but that's easily remedied. Fortunately, while the weathering looked a little heavy at the bench, under layout lighting conditions it looks much better.

As I mentioned at the beginning, I still have a bit more I want to do here: "plant" the house, add a walkway, mailbox, power lines, garage, and such (not to mention the dog!) - and I gotta figure out how to "mow" the lawn . . . . But I'm ready to move on to other projects. Need to go "north" to work on the Valley Coal Co. scene as well as get back to the Rt. 15 overpass.

For now though, I think I'll take a little bit of time to enjoy having completed my first house, with weathering and everything!
Posted by Chris Adams at 12:38 PM