A Few Words about Wordless Wednesday #182 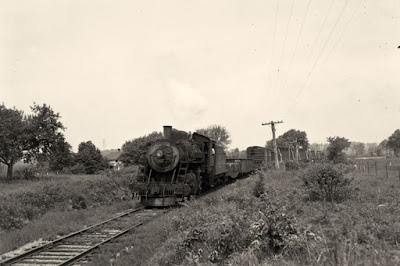 The pic above is the full-image view of yesterday's shot (the cropped version that's most often seen was used a few posts ago) and it clearly shows NHRR K-1d #356, southbound just south of the Goff Brook bridge, hauling steel girders, ostensibly for the construction of the Baldwin Bridge over the CT River between Old Saybrook and Old Lyme, CT. I'm told that the girders were transported over the Valley Line (due to its noted high clearances) down to Deep River, CT where they were transloaded onto barges and floated down to the construction site.

The bridge was completed and dedicated on December 4, 1948, so I knew that this photo couldn't be any later than that, and - given the trees and foliage - couldn't be "3/48" which was what was written on the back of the photo. I figured the latest it could be was Summer, 1948.

John Wallace then pointed out that the date on the back of the photo is likely even farther off than I thought, noting that the #356 was gone off the Valley Line by spring, 1948 and replaced with #466. I'm not sure exactly when the 356 was replaced, since according to a motive power report commissioned by the railroad, the 356 was on the local on April 20, 1948.

In any event, it's pretty clear that this photo was shot during the summer, not spring, fall or winter. And I tend to agree with John - it's more likely summer of 1947 than 1948.  Contemporary accounts of the bridge's dedication noted that "it was completed in less than two years" and I doubt the support girders would have been delivered only 3-6 months before the bridge was finished.

Solving little historical mysteries like this is one of the most fun parts of prototype model railroading. For just a little while, you're transported back in time (though often down a rabbit hole!). One thing I know for absolute certain though - that house in the background was there then, it's still there today, and now I'm modeling it. And now it looks like I need to get some HO scale girders to add to a few of the trains . . .
Posted by Chris Adams at 9:28 AM