One of the joys of prototype modeling is that there are probably some folks that are familiar with your prototype. You don't really have to explain what you're doing - they automatically "get it." If you're modeling some time in the past, you're even more blessed if those folks remember the time as well as the place you're modeling.

I've often mentioned John Wallace as a great source of inspiration for this layout project. His articles on the Valley Line in the NHRHTA's Shoreliner magazine, based on his personal memories, were the initial impetus for modeling the Valley Local. He even grew up in one of the towns I'm modeling.

Unfortunately, while he's been an avid railfan since his teen years (and his photos of the line from the late 1940s are priceless references), he's not a modeler. Fortunately, there's another fella that grew up in Wethersfield - just a few years after John - who IS a modeler. I've mentioned Dave Messer before and he's been contributing some amazing models and details to help this project.

This past weekend, the postman delivered his latest contributions - and they've hit a new level. . . 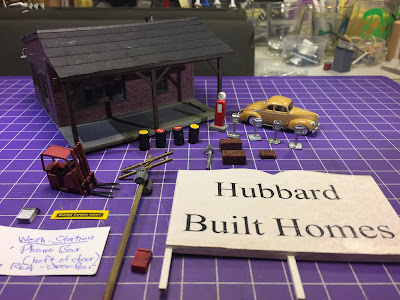 Pictured above are a billboard for a builder whose houses were prolific in Wethersfield during my era, some additional details for the Wethersfield station, and assorted other details, including mailboxes, crates, barrels, a gas pump, car, and forklift.

But that building in the background is the office and scale for the Valley Coal Company. Dave's an excellent modeler, so I knew his model of the office would be spot-on.

And as you can tell from the prototype photo above, it is. But nothing really prepared me for what else is going on in the model . . .

I'd seen through the main window that there was a little bit of an interior - a desk with a lamp on it. But it wasn't until I turned on the lights that I saw all the other cool things inside! 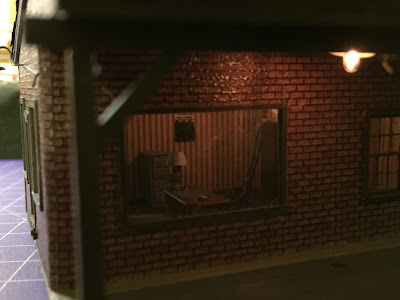 You can see the desk and lamp pretty easily, but check out the beadboard wall and the delivery schedule board! 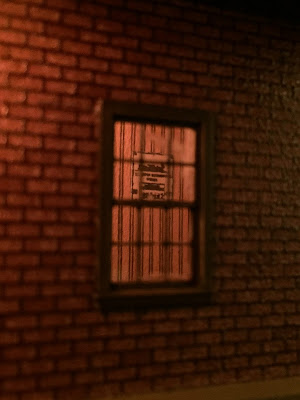 There's also a full closet and door inside, and above you can see a wall calendar hanging on the side of the partition wall. 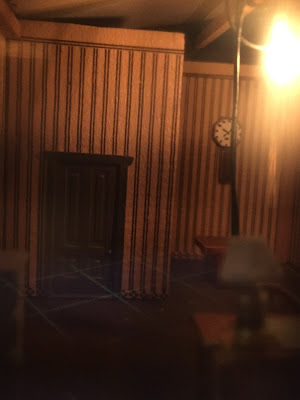 Here's a better view of the closet - and a wall clock on the far wall(?!) 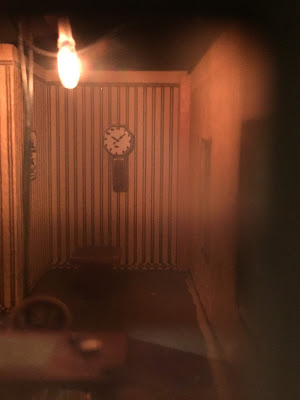 Better view of the clock. All of these pics were shot with my iPhone peeking through the windows. The roof isn't removable and I couldn't even see these things with my glasses on (too far away - I couldn't get close enough to look inside!) So it wasn't until I went "exploring" with the phone that I could fully appreciate all the amazing interior detail.

Looks like I'll be installing a lighting bus soon :^) - but in the meantime, like with the tower that Bill made (click here for photos of that interior!), I'll take temporary power off the track bus. And I'll be turning down the room lights too - there's no way I'm going to keep folks from seeing this incredible work.

It's so cool to have folks that not only get what I'm trying to accomplish, but are enthusiastic about contributing their own time and talent to help it along in such an amazing way. Most of the time, that happens on-site, but Dave's two states away and - with a little help from the postal service - can participate as well. Thanks again Dave!
Posted by Chris Adams at 8:57 AM