Rt. 15 Overpass Update and Things to Do Before You Paint Your Track!

While Bill has been working down at Goff Brook on the Wethersfield/Rocky Hill line, I've been focusing on the north end of Wethersfield, and am happy to report some (glacial) progress on the Rt. 15 bridge: 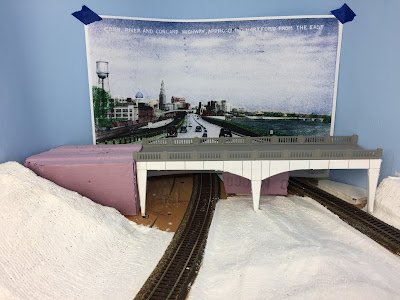 I drew (like, with a pencil and ruler - nothing computer/fancy) my best approximation of what the support girders will look like under my model of the Rt. 15 overpass, based on the prototype photos, the bridge model I expect to use for the deck, and the space I have. As you can see in the "proof-of-concept" photo above, it looks like it's going to work out well. Thankfully, my buddy MikeR is doing some computer/fancy drawing in Sketchup for an actual resin master of these parts. VERY exciting! 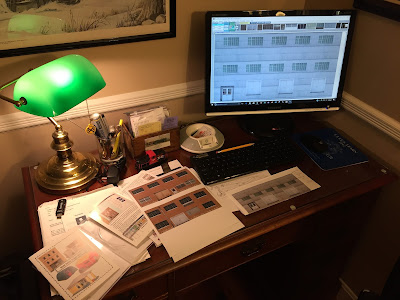 Lest you think otherwise, I'm not totally computer-drawing-phobic: I've been fooling around a bit with my Model Builder software in an attempt to create some building mockups for East Berlin (specifically, Stanley Chemical and the Kane Brickyard). Unfortunately, I've found the learning curve to be just a bit steep, so I need to take a break from time to time and do something simple.

The only downside to how fast Bill works is that sometimes we get ahead of ourselves a bit. Case in point - we (I) almost forgot to paint the track before the scenery went in at Goff Brook. It would have been a pain to have to hand paint it later - it's MUCH easier to get out the rattle can and shoot it with abandon.

And that was the plan for this past weekend - get all the sensitive stuff (structures, rolling stock, etc) out of the way, put up some masking/dropcloths  and have at it.

I was just getting ready to get out my favorite track paint base coat (Krylon Camouflage Earth Brown #279178) when I stopped..... and just in time. I just remembered a few things that I still needed to do before painting the track. Hopefully, you'll do these too before it's too late (or a real pain to do later...)

First off, I assume that your track as been down and operable for a while, so you've done any major adjustments and minor tune-ups to be sure it runs flawlessly. To be sure of this, the first thing I did was file down the points on the turnouts a bit: 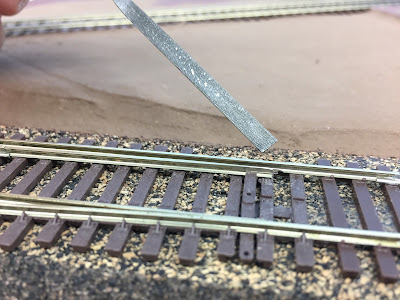 Slightly round off that hard corner at the top/tip and file the end edge to fit super snugly against the stock rail. Do for both points. 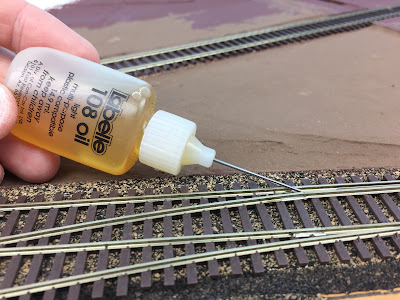 The points are fed electrically at two (well, four) points: Primarily where joined to the closure rails, and secondarily where the points come into contact with the stock rails. That secondary point can be easily cleaned after painting, but to keep paint from gumming up the point/closure rail connection, I add a drop of plastic compatible oil, as above. 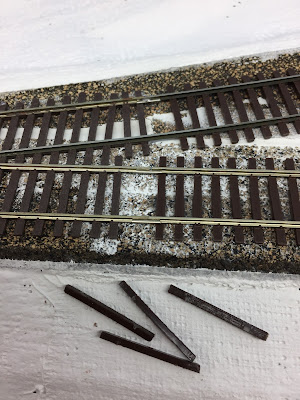 Filler ties are easily overlooked until after you're done spraying. Best to put them in beforehand so they get the same base coat as all the other ties around them. 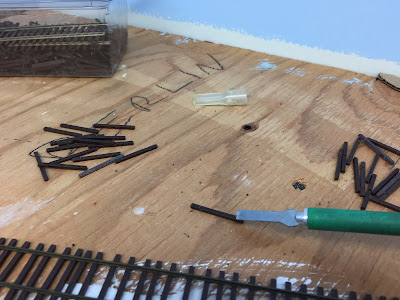 Important note: You'll want to be sure to shave off the spikes from any ties you use as filler ties (or, better yet, use thinner profile ties). Otherwise, you'll risk creating a vertical hump/kink at the rail joint which is just asking for a derailment or separated couplers. 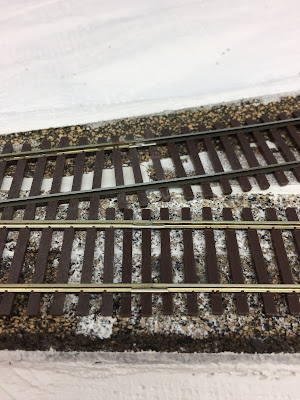 Ah - that's MUCH better looking and ready for painting.

But don't get out the spray can just yet! 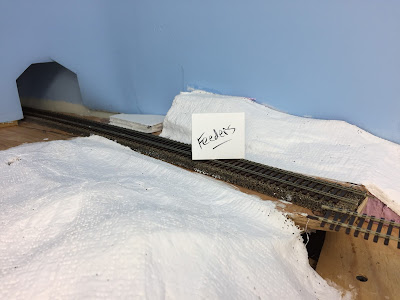 We haven't had any ops sessions using the Berlin Branch - heck, the trackwork isn't (wasn't) even completed there - so I hadn't bothered putting feeders in yet. But it's a VERY good idea to get those in before you paint the track 1) because it's much easier to solder feeders to clean/unpainted rail, and 2) because painting the track will cause those solder joints to disappear. So the little sign above reminds me that I've got to put some feeders in.

But before I do that I really needed to finalize the trackwork in East Berlin and finally complete the Berlin Branch. So out came the Aleen's glue and water bottles: 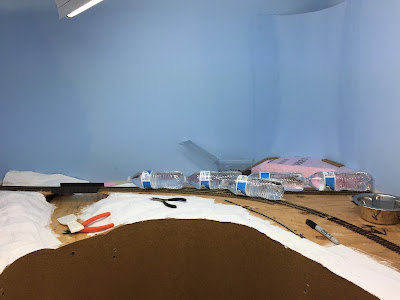 And that's the current state of things. Next step is to remove the bottles, install the feeders, and mask everything off. THEN, and only then, will I actually be ready to paint my track.
Posted by Chris Adams at 12:51 PM