Just wanted to do a quick post to wish you and yours a Very Merry Christmas!

Like many of us, things have been pretty busy around The Valley Line. Not much progress to report, but I've been getting to stuff as I can - mostly structure part prep for Ballantine's and Wethersfield Lumber. I hope to have progress photos - and maybe even some tips - posted soon. And I'm really looking forward to ramping up progress after the holidays (including a brief planned diversion to build a couple of F&C New Haven RR gondolas that I received from Santa TomD!) despite the up-coming legislative session.

I hope your "Santa" brings you lots of fun RR stuff - but I wish most for you that you get the gift of some time to enjoy what you have: build some kits, work on your layout, or even enjoy some "armchair modeling" by the fire (or a video of one playing on your TV/ipad). It's a wonderful time of year, made all the more wonderful by this amazing hobby and the people you meet along the way. 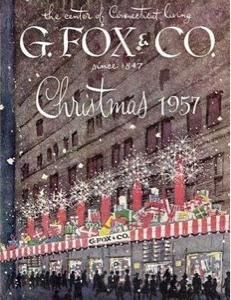 G. Fox & Co. - Where CT Valley folks did some of their Christmas shopping back in the day (or at least visited for the amazing displays). Not 1947, but close enough to provide some fun holiday time-travel!
Posted by Chris Adams at 7:23 AM 1 comment:

Email ThisBlogThis!Share to TwitterShare to FacebookShare to Pinterest
Labels: Christmas 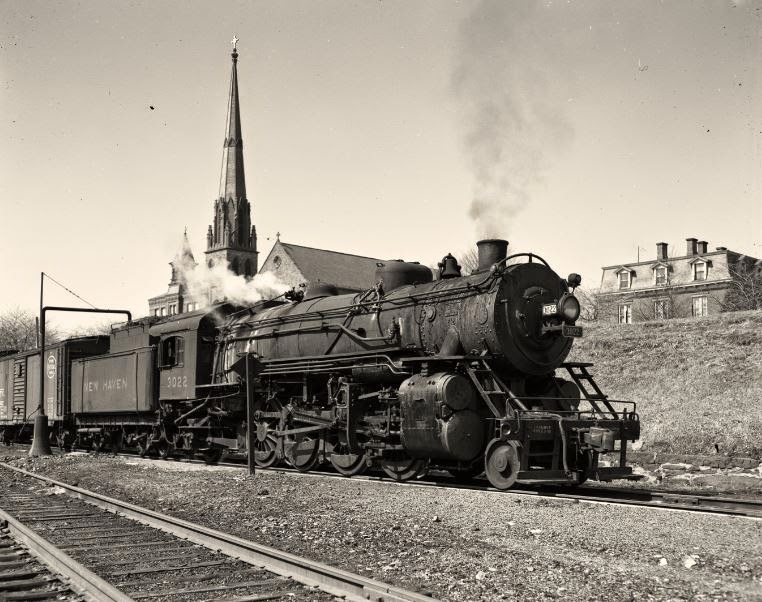 Posted by Chris Adams at 7:32 AM No comments: 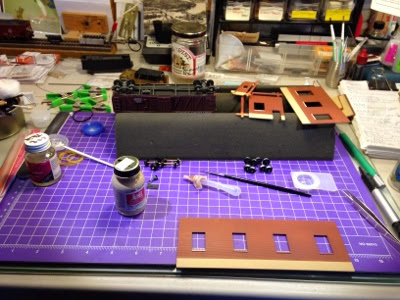 After switching out some wheels, I decided to change things up a bit and paint the "concrete" sills on the Ballantine building. Small brush, strained Floquil Foundation paint (still lumpy, go figure) and a steady hand.
Surprisingly therapeutic - and perfect for a spare hour on a Sunday afternoon. 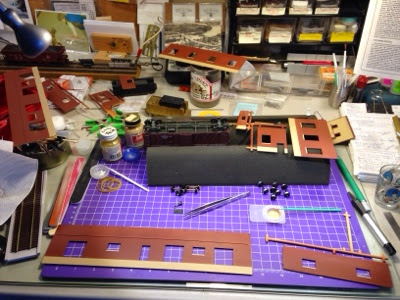 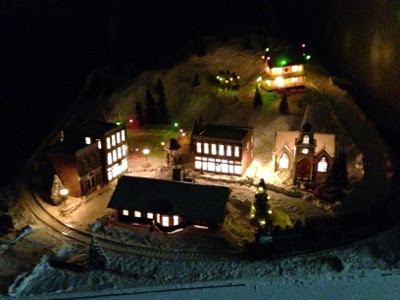 Just a quick grab shot of the only layout I ever completed (so far). A loop of track, assorted buildings (all lit), and a bunch of mini-scenes including skaters on a pond, a Christmas tree salesman, a snowball fight, etc. There's even a town tree and Santa in the gazebo.

It's fun to spruce it up each year - and is a great way to get into the spirit of the season.
Posted by Chris Adams at 2:07 PM No comments: 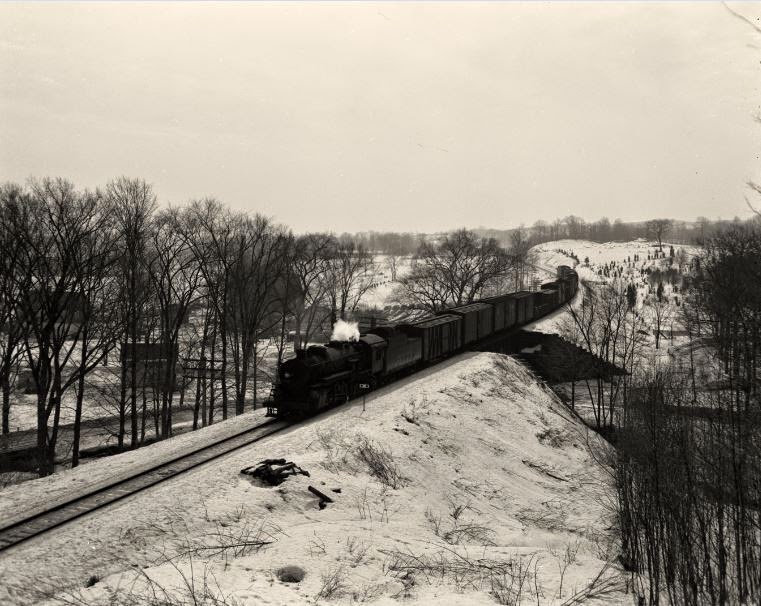 Posted by Chris Adams at 6:55 AM No comments: 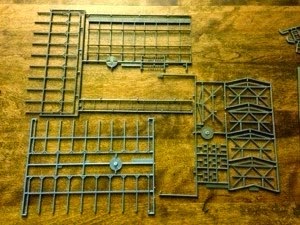 Pictured are the "wood" parts representing interior bracing & racks for the Walthers Walton & Sons Lumber Co. kit. I'll be using this kit to represent the Wethersfield Lumber Co. on my layout.

I've come across a couple of nice websites here and here that do a good job of explaining how to distress & paint/stain/finish styrene to look like weathered wood. The results are nothing short of contest-quality, but seem to be a bit of overkill for something that will be mostly hidden (I plan to build the kit like this:

The question is: How would you paint/finish all that interior detail? I know not to just build it "as-is", relying on the molded plastic color.

So what's a quick and easy approach you'd recommend?

Barring any alternatives, perhaps I'll use these parts as a way to practice that "contest quality" approach - but that will make the build take longer. And I think that's time that would be better spent on things you can actually see :)

While I'm at it, here's another question.... How would you do the exterior walls and roof?

I was thinking just shooting Grimy Black on the roof parts and weathering them. As for the walls, I'm considering trying a "peeling paint" technique - where I spray it with some sort of "weathered wood" base color (or perhaps - yikes! - do the weathered wood technique from those websites!) and then brush on some rubber cement before shooting a top coat. Erase the paint from the rubber and - voila! - peeling paint.

What do you think? Any other tips/approaches you'd suggest? 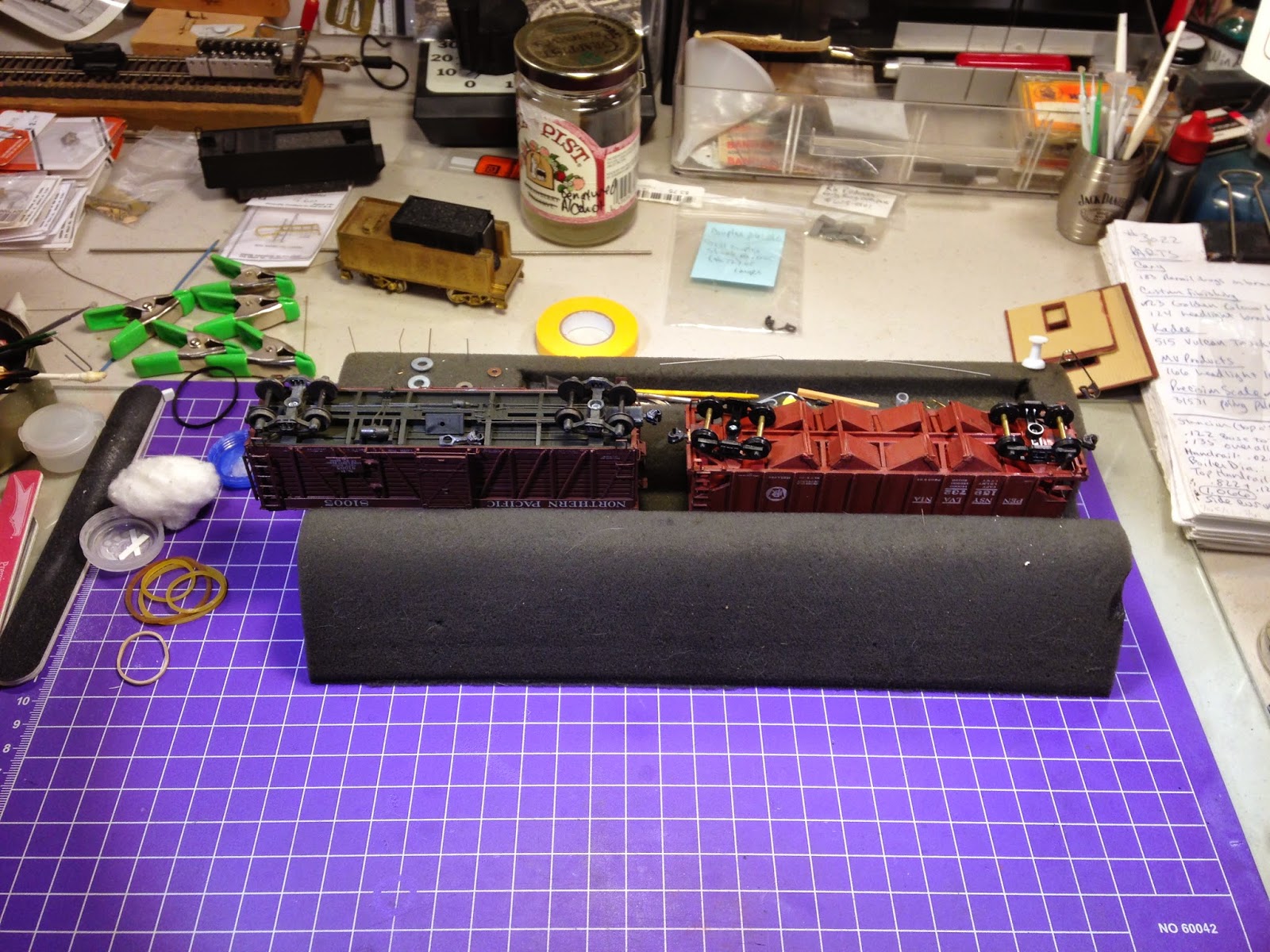 So get your layout to running & operating status as soon as you can!  You certainly won't regret it (though you may end up being busier with it than ever - but that results in "progress made" as well!)
Posted by Chris Adams at 3:00 AM 3 comments: 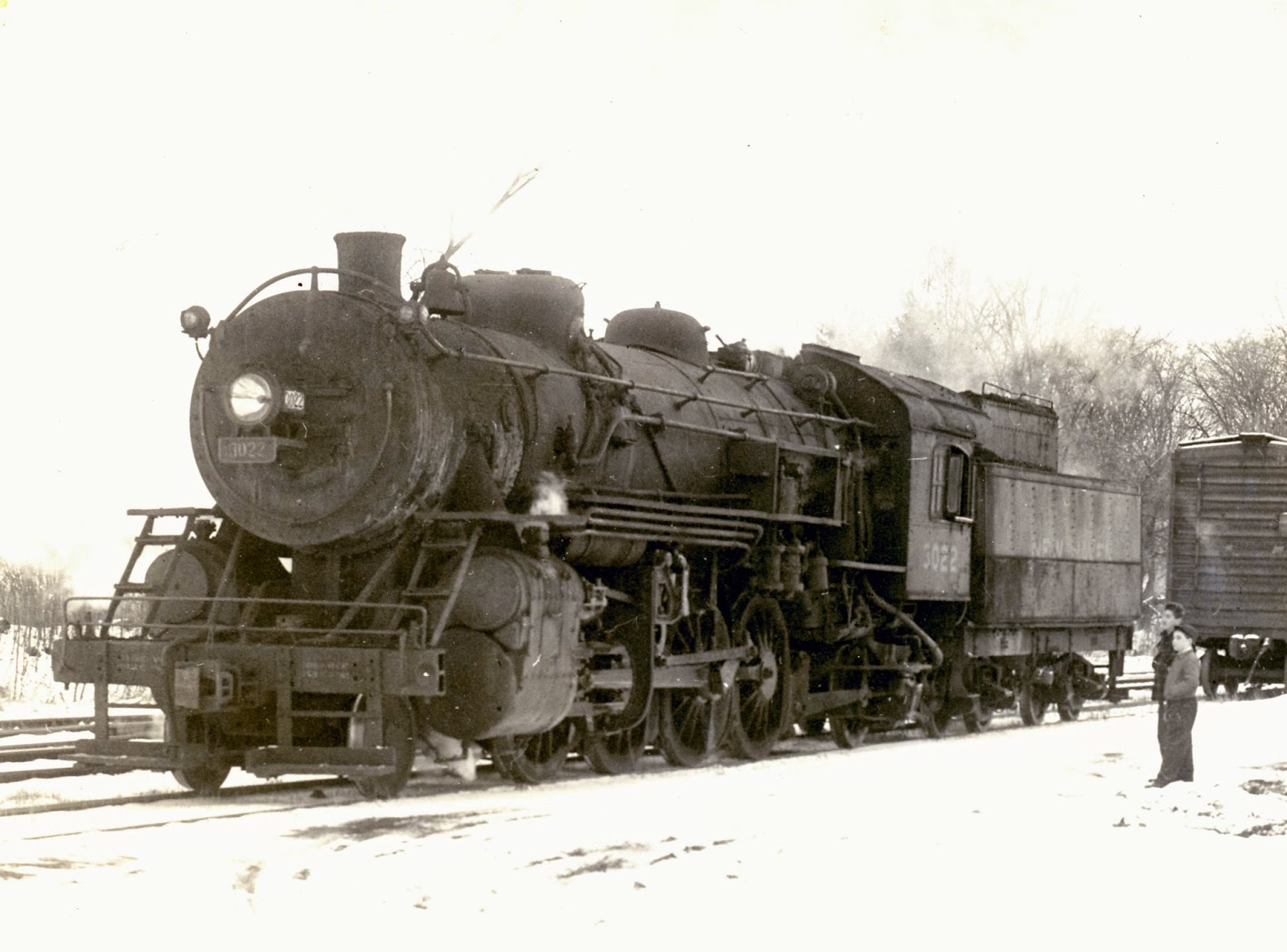 Posted by Chris Adams at 9:38 AM No comments:

Installing a Pilot-Mounted Coupler on a Brass Steam Locomotive, Part 2

Thanks again to those commenting on Part 1 of this series. I took your comments to heart - and promptly chickened out. I'm going to wait a bit before attempt to drill such a small hole in the (very) narrow shank of a KD #58 metal coupler, drill press or no drill press.

To my credit - or at least an argument against my "chicken-ness" - I found an alternative solution. McHenry makes a plastic coupler that has a much-more-reliable closing mechanism: metal spring rather than a sliver of plastic. There's even a little letter "E" pressed into the underside of the shank that you can use to start your hole (with the point of a safety pin, in my case) and then it's a snap (not literally, thankfully) to drill out the hole with a #72 bit.

The solution was easy to figure, but a little more difficult to do. I basically had to "thicken" the coupler shank using two bits of scale 1x6 styrene strip. Since I wanted everything to continue to move nice and easily, I had to - yup, you guessed it - drill some more holes. I recommend you mark/drill the hole first then cut the length to fit. Ask me how I know....

The resulting shims (one pictured above) are so small, I couldn't even get my camera to focus properly for a picture (note to self: get a macro lens app). But I used some copper wire to thread a shim, then the coupler, then another shim into a "sandwich" (shank between two shim "slices") and then used just the tiniest amount of styrene glue you can imagine to stick things together just long enough to keep the 3 holes lined up for positioning in the pilot draft gear box and sliding the fixing pin down from the top and through the holes.

It actually took me much longer to type that out than it did to do. The result was certainly worth it:

I'm very happy with how this turned out, and the coupler performed like a champ at the ops session. Pilot couplers on brass steamers are usually just dummies, but if your engine is in anything but dedicated passenger service, it's likely it's going to have to switch a car or two at some point using the pilot. On a local freight engine like my K-1 mogul, a working front coupler is an absolute must. And now I have a pretty easy way of modifying couplers to fit what the brass manufacturer left me with. Hope you find this method helpful too.
Posted by Chris Adams at 12:48 PM No comments: