For this week's edition of Friday Fun, one of my regular operators, Pieter Roos, sent me his latest video of the Valley Line which he shot during last June's operating session.

Click here for the report I did on the session itself, and just click below to enjoy a great video of some of the trains that ran that day. I hope you enjoy it as much as I am - thanks very much Pieter!

My operating sessions are typically held on a weeknight, but in order to accommodate folks that can't make it during the week, I'll occasionally host a Saturday session. And extra bonus: folks from long-distances (out of state) can usually make it.

So, after the first date I picked was snowed out, we were able to finally get together on Saturday, March 9. The layout hadn't operated in a while - and there were more than the average number of giltches as a result - but overall, it seemed like everyone had a good time. At least if you judge by the photos . . .

Since it's been a few weeks since the session, I'm afraid I don't remember enough to provide a detailed play-by-play. The session did generate the usual punch list of projects to do before the next session (one of the most valuable products of a session for me) and it also provided another record of the attendees in the crew register (probably the most important keepsake of these sessions). And it's always interesting - and sometimes a little frustrating (but in a good way) - the new things that folks come up with for me to fix/address.

This time, for example, one of the operators suggested I move the track diagram from the fascia to somewhere above the town. Apparently, as he was operating - and having to lean over much of the town to get to some of the spotting locations - he forgot all about the diagram that was at his waist. Out of sight, out of mind - but an easy correction and one more thing that will make the layout even better next time.

Also, despite being thrown into the deep ends of the pool mainline, unqualified and with only cursory training, my "mainline moles" for the session - James and Kaylee - performed like champs. IIRC, we only needed to stop the clock once to catch up and more trains got to run than do during a typical session. All testament to their being able to pick up the job so quickly.

Jim's operated here before, but Bill hasn't. Despite that, PDX-2 not only ran without any hitch (not that I recall, anyway), but they even had time to get started on another local freight before the session had to end.

Neither Joe nor Schuyler had ever operated the Valley Line before either - and I think this was Joe's first time operating at ANY layout - but they piloted the eponymous Valley Local from Hartford down to East Haddam and back with few problems. Turned out their power (Mogul #343) was a little troublesome and got swapped out early on. After that, I think everything went fine.

None of the locals were operated perfectly - some cars didn't end up where they were supposed to - but I attribute that to the fact that so many of the operators weren't qualified on the line and had no experienced pilots - and to the fact that my paperwork may not be all that familiar even to experienced operators.

But all in all, I think we accomplished the main goal - to have fun spending a day doing some railroading in the Connecticut River Valley during the Autumn of 1948.
Posted by Chris Adams at 12:01 AM No comments:

Day job distraction continues, but I'm hoping I can get at least a little better about posting in the coming days/weeks. Heh - won't take much to get better. I even missed Wordless Wedensday last week. Ugh. But please stay tuned - and thanks for your patience as I continue slogging through my busy time of year at work.

In the meantime, I've been trying to do some modeling as I can. And one of the things that I needed help with was a way keep a part nice, square & perpendicular. A square would keep it, well, "square" but - as you can see in the photo below - the end of the square dips so it can't help keep anything perpendicular. 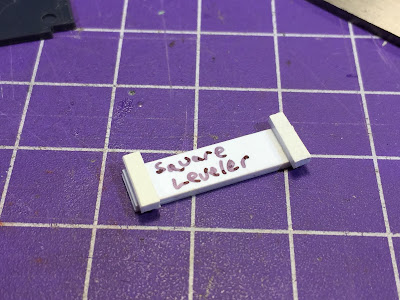 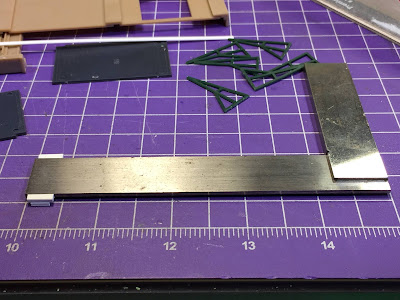 Now, your square is not only square, but the thick leg can be used to help hold something perfectly perpendicular now too! 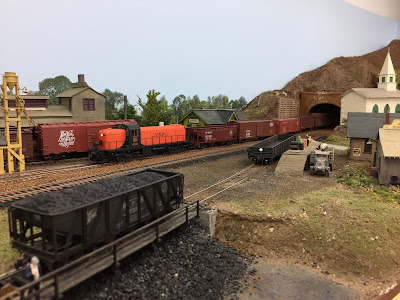 Posted by Chris Adams at 5:31 PM No comments:

Happy Friday! And apologies for the lack of posts lately. The day job has gotten much busier much earlier than expected - and that means late nights, and fewer blog posts. I have been able to do a tiny bit of modeling though - centering around trying to put together some Walthers modular buildings.

More on that in a future post. For now, I wanted to share a little "atmosphere" and inspiration for why I model what/where/when I do. "New England Yesterday and Today" was produced in 1938 by the New Haven Railroad as a way to promote the region for tourism - and the NHRR as the best way to get there. The mighty I-5 class 4-6-4 steamers ("Shoreliners" on the New Haven) are brand new and figure prominently in the train shots in the video. At least as important though, are all the wonderful scenes from an era that's all but forgotten (though won't be forgotten on my layout if I do it right).

So, sit back with your favorite beverage and enjoy this little trip back in time . . .