While I posted at the end of last October about modeling the bridge over the Mattabessett River in East Berlin, I think I actually finished it months earlier. In any event - and now that East Berlin is starting to take shape along with Wethersfield - it was high time it got weathered so I could install it.

Thankfully, I've recently gotten a lot of experience weathering ties - so I started by weathering the ties on the bridge using the same technique I used for the rest of the track in the area.

For the bridge itself, I was going to try and use washes - a little "lamp black" and "burnt sienna" oils mixed in turpentine for oily & rusty residues. But I couldn't get enough pigment to show up and - while I might get there eventually if I added enough applications - I decided instead to break out the weathering powders that have been sitting on my shelves for far too long.


I've weathered a caboose and a few freight cars here and there, but I've never tried weathering a bridge before. But weathering with powders is, IMO, about as foolproof a weathering method as I can imagine. The results are very predictable - you see right away what you're getting - you can easily modify them (e.g. tone down with a darker color) - and if all else fails, you can rub them off (well, mostly, and it'll still look like weathering).

The most important thing is to try and have a color photo of what you're weathering to refer to so you have an idea of what different colors & patterns are most likely. 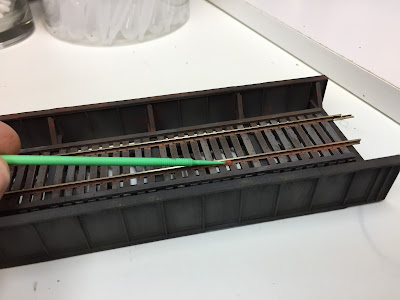 One step that's easy to overlook - and something I'll be doing to all my track after it's ballasted - is to take a microbrush and burnish some rust color on the sides of the rails. It'll hit the tie plates too and really make the rails stand out realistically. 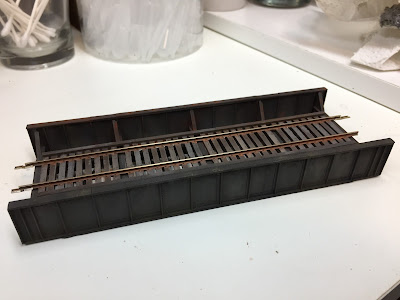 So there you have it - my first-ever weathered plate girder bridge. As always, you can click on the image to make it larger. I'd really love some feedback and (hopefully positive) criticism. How would you have gone about it? Any tips/techniques to share?
Posted by Chris Adams at 4:00 AM