Just got back from an out-of-state visit Way Down South to see the family, so missed this week's Wordless Wednesday. But I wanted to be sure to remind you of the 16th Annual New England/Northeast Railroad Prototype Modelers' Meet this weekend, starting tomorrow June 1. Click here for their website and particulars. Online registration is closed, but you can still register at the door.

And here also is a shameless plug for the clinic I'll be giving on Saturday at 10:30: 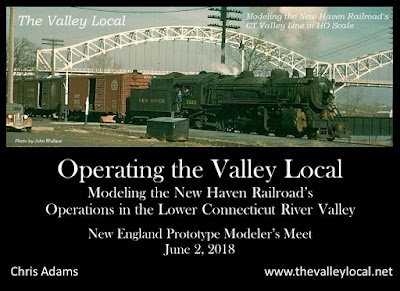 If you're able to make it, be sure to say "Hi!" - it's always cool to see that folks are still reading (despite the dearth of posts lately - but that's going to change...) and to put faces to names.

Hope to see you there!
Posted by Chris Adams at 11:25 AM No comments: 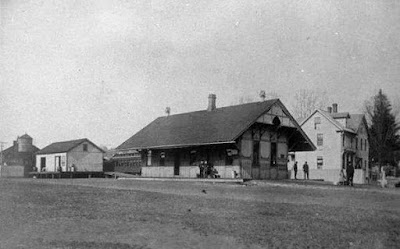 Posted by Chris Adams at 6:57 PM No comments:

Posted by Chris Adams at 7:29 AM No comments:

It's been a while. Since I started this blog over 4 years ago, I don't think I've ever had a hiatus this long, but life - as they say - has a way of hijacking your plans from time to time. But all is well, relatively speaking (sorry 'bout the pun...).

My dad is doing really well, the Missus' dad is doing less well, but ok. At least he's home now. He's not recovering as fast as we'd hoped and the doctors expected, but they're not super concerned so we're trying not to be.

And the day job did its usual ramp-up into Crazy Town mode over the last couple of months, so that's been a major distraction. I've also been trying to find a new car in the middle of all that.

So, unfortunately, the blog - and model railroading in general - has taken a back seat. More like waaaay in the back of the bus.

But light is showing on the horizon. I debuted a clinic on operations at last month's meeting of the Nutmeg Division of the NMRA. It was kind of a dress rehearsal for a presentation that I'm scheduled to do in a few weeks at the NEProtoMeet. I'm also scheduled to have an open house on the Sunday of that weekend - I just hope I can get the layout cleaned up and operating again in time(!) Hope to see a lot of you that weekend!

And while all the non-model-railroad stuff has kept me from model railroading, I fully expect to feel the nibble of the bug again soon. Of course, as I do, I'll share that here. Thanks much for your patience - hope y'all will stick around a bit more.
Posted by Chris Adams at 3:24 PM 3 comments: