It's gotten pretty busy at work lately as we ramp up to the 2016 legislative fun & games session, so I haven't had much time to post lately. I have, however, been making some incremental progress on the layout (mostly having to do with the west end staging yard), and some great progress on my New Haven Railroad shanty stove restoration (mostly having to do with taking it out to a shop on Cape Cod - then having to (re?)do some of the work myself. Not to mention, um, a house full of smoke - but that's for a future post).

But no matter how busy I get, I always, Always, ALWAYS try and make time for Springfield (aka The Amherst Railway Society Railroad Hobby Show). This event is the largest of its kind in North America and is only about 90 minutes from where I live. Folks come from around the world to attend, and there's typically 25 thousand of us on a typical weekend - even despite New England winter weather. Last year's numbers were a little low due to a snow storm on Saturday - and I couldn't make it since I had the flu. But this year's great weather and 2 years' pent up anticipation guaranteed a great turnout.

Especially since people will literally drag themselves out of their deathbeds to get to this show.

Nothing - not the flu, not TB, not Ebola - will keep folks away from Springfield. I actually saw a guy in a body cast trying to navigate the crowded aisles, his knee resting on a little scooter that he shuffled along on...

I'm not kidding! Part of me wanted badly to get a picture as evidence of his dedication to the hobby, but I didn't want to appear rude. At least he wasn't contagious. The stories are legendary of the "Springfield Flu" that afflicts most attendees within a few days of the show, given all the sickees there.

But I wimped out last year, so I was pretty excited to be able to make it this year. I only had one day to get through all 4 buildings (multiple acres' worth), so it was especially nice I had a perfect health-conscious excuse to avoid shaking hands with people so I could just motor through.

It also helped that at this stage in my hobby, I'm not really looking for much - and what I am looking for is very specific. For example, while gathering research on my line's operations, I discovered - much to my shock and surprise - that I don't have a New Haven Railroad Book of Rules. I had the 1956 version at one point, but sold it on eBay during one of my ruthless era-specific cleansings. For my chosen era of 1947, the NHRR's 1943 edition is the one to get. But I've looked for one for a while and haven't been able to find one. I also needed to stop by Bob's Photo and pick up a book on Vermont railroads he'd set aside for me (my library covers anything New England railroad related). Finally, I always keep my eyes open for good deals on class K moguls and class J mikados, not to mention DL-109s. I've got what I need but I'd like to have a few more - especially if the price is right.

Rather than give you a play-by-play of the day, here's a quick sampling of a couple of the more interesting things I saw as I motored walked on by . . ..


Now, without any further ado, I'll answer the perennial question on the minds of folks who weren't able to attend Springfield as well as the lucky ones who did: "Whadja get??" 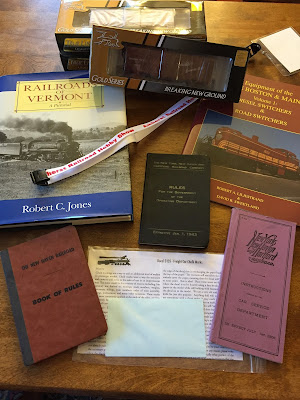 First thing in the day, the fine fellows at True Line Trains hooked me up with not one, not Two, but THREE 1937 AAR boxcars, painted for Canadian roads in schemes and/or numbers I don't already have. They'll be a great addition to the fleet!!

I also found (another) copy of the 1956 edition of the New Haven RR Book of Rules for just $3 from the guy who had the cool baggage tag collection. It was early in the day and I figured it best to get at least some sort of rulebook for my collection - and at only 3 bucks, I couldn't go wrong.

After roaming around for most of the day, and enjoying seeing and chatting with old friends (and meeting some new ones, which I'll get to in a future post), I finally saw what I'd been most hunting for: a 1943 edition of the NHRR rule book!! On the same table was a 1906 edition of Car Service Rules - certainly way before my era, but I expect it'll make for some pretty interesting reading. And all that route information should come in at least a little handy in learning how traffic moved on my favorite railroad (even if over 40 years before my era). I asked the gal how much for both, she said she'd have to check - she thought they were $10 each, but I could have them both for $10. I would have paid $10 for just the rule book, so I feel like I got the other book for free!

During the course of the day, I found a J-1 mikado and 3(!) K-1s, all at the same dealer. The prices were more than I wanted to pay, so I ended up passing on them.... for now. I expect they'll be available next time - it's just good to know there are still some of these around to be had.

Finally, as the show was winding down, my buddies and I headed across the street to Bob's Photo - they to check out the photos, me to pick up a book that had been set aside for me at the Marlborough show (aka the New England Model Train Expo). I'd seen that he had (what I thought were) "both" volumes of "Railroads of Vermont" and I knew I had one of them, but I didn't remember which one. So I'd texted the Missus asking her to check my shelf and send a pic back, but by the time she did, Pete and I were already on our way home. But at least I now knew I already owned Volume 2, so I had Bob set aside the other volume for me to pick up in Springfield. Well, I'd assumed it was Volume 1 (all the better to address my OCD), but it ended up he only had the "Pictorial" which was, essentially, Volume 3 (though not marked as such - but it's the 3rd book in the series). So, suffice it to say, my OCD on this is now even worse than it was before. But he was giving away a free book with purchase, so I got a copy of "Boston & Maine Diesel Switchers and Road Switchers, Vol. 1" which I supposed was to assuage me, but now I wonder if I should get Volume 2 of that series . . .#firstworldproblems

But all in all it was a very good day - and it wasn't over yet! I still had dinner at the Steaming Tender to look forward to, but that'll have to wait until next time...