Ghosts of Railroads Past

(In the "spirit" of the season, and because it's Halloween, I hereby repost this from last October. I think you'll agree it's especially fitting this time of year...)

A big part of my motivation for recreating the Valley Line is to keep alive the memory of the men & women who were responsible for getting the stuff of life delivered to you, each and every day.  From coal for winter heat to a bicycle to ride in the summer, for over 100 years in this country the stuff of life was delivered almost exclusively by rail.  And sometimes, if you're lucky, your historical research will unearth a ghost or two.

Given that it's Halloween, here's a question for you:  Do you believe in ghosts?

The answer for me depends on what kind of ghosts you mean. I don't believe in the creepy un-dead or goulish wanderings of departed souls. But I do believe in the ghosts of the past - the hauntings of a place by the memories of the people who were there. Who were they? What were their dreams and plans? Were they anything like us? While dead people don't actually haunt us, the spirits and memories of the past can - and often do. Especially if you're paying close attention.

During this time of year especially, if you keep your eyes open and know where to look, you can see some of these ghosts of the past materializing.  You have only to slow down, pay attention, and keep your eyes peeled. Here's just one example for those interested in the history of railroading in the Connecticut River Valley...

I passed this spot a dozen times back when I used to ride my bike to work, but only recently did I spot a ghost of the old railroad line between Middletown & Berlin across this field. Do you see it there in the distance? How about if I zoom in . . .

You'll have to excuse the camera quality of my phone, but if you tilt your monitor just right, you should see, just beginning to poke out of the trees, this beautiful stone arch bridge. The railroad was abandoned and torn up years ago, and the trees have long since reclaimed much of the right-of-way. But this bridge remains - a monument to the memory not only of the railroad, but to the spirit of the men who built it.

If during your travels you stop at a spot like this and imagine, even for a few minutes, how those men lived, what their hopes were and whether they ever achieved them, you might see some ghosts.

And if you're especially quiet, you may even hear in the sound of the leaves floating by on the breeze a whisper of thanks from those men for not letting them be forgotten. 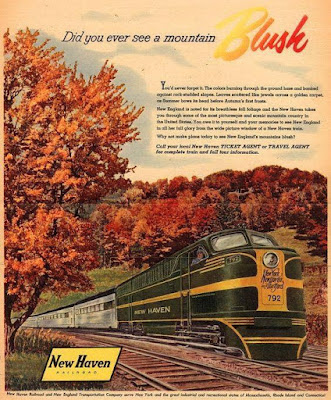 It would appear I owe at least a small apology to those of you who follow the Valley Local here on this blog (or, even better, through the website - you do know there's a website, right? :^) rather than on Facebook. Yes, there is a Facebook Group for the Valley Local and if you're not following there already, be sure you do!

Turns out, I tend to post there more frequently than I do here - and for that, I apologize. I'll try to do better. At least the posts here tend to be more detailed, and hopefully more useful (the FB posts tend to be quick grab shots of what I'm working on at the moment, but at least they're more up-to-date).

FB followers know that I've started on my first craftsman structure kits. Simple affairs, really, and that's kinda the point. Just want to get started and build some skills. More on that in up-coming posts, but for now, I needed to figure out a way to store some extra-long wood strip stock I had to get for the project. (click here for a tip on how to store standard-length strip stock).

It's important to keep such long stock straight, so after looking at my standard strip stock storage, I surmised a solution (sheesh!): 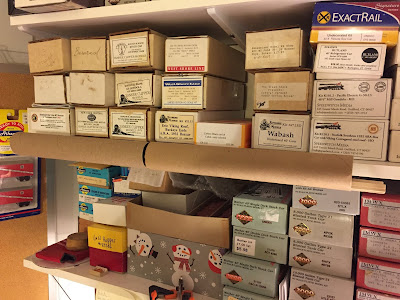 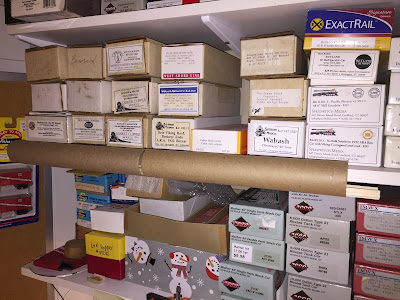 Yup - I got meself some more paper towel tubes and hot glued a couple of them to the front of one of my storage shelves. It was such a quick project that I totally forgot to spray paint them white first. Since the price is right (basically, free), I may just pull these off at some point and put up painted ones. But for now, my strip stock is safe and secure!
Posted by Chris Adams at 8:59 AM No comments:

You can tell things have been busy 'round here lately since I'm just now getting around to doing a post about my last/latest operating session which took place almost a month ago(!). But, fortunately, my tardiness has been for good - and fun - reasons, being able to do so many RR-related things the past couple of months. If you don't know what I mean, just scroll back through the recent posts on the NHRHTA Reunion, the MARPM, and "OP"toberfest!

But despite the crazy/great schedule, I can't skip over reporting on one of my ops sessions - since getting folks together to bring the railroad to life is one of the main reasons I'm doing this project!

So, without further ado, here's a little slideshow of the evening. . .

As during every Autumn season, I have big expectations of hosting as many ops sessions as possible. I think one October, I actually hosted three of them in one month! My layout is set in Autumn, after all, so I want to operate the layout as much as I can during Sept/Oct. But - alas! - it looks like Autumn 2019 isn't going to quite work out that way. Sure, I had 2 sessions during September (this one, and the one during NHRHTA Reunion weekend), but not a single one so far in October - and none expected.

But, like the reason for this report being late, my lack of sessions is due mostly to being out and about doing other RR stuff I haven't been able to do before. And if there's one good reason to put off an ops session or two, I figure that's it!
Posted by Chris Adams at 11:17 AM No comments: 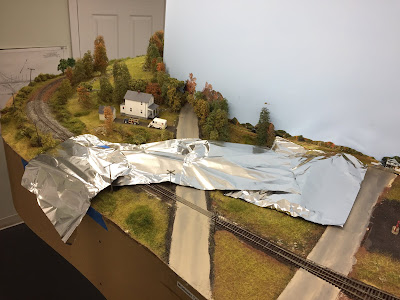 I suppose this post could have been titled "OP"toberfest Day 3 since we were able to visit one last layout on the Sunday before heading back home - Kip Grant's D&H Sonnyvale Branch.

The Sonnyvale Branch is based on the real Lake George Branch of the D&H, with just enough variation and variety to provide a bit more operation than the prototype. It wends its way from the D&H mainline at "Junction" and works its way through bucolic farmland at Sheldon's Curve and the town of Jasperdale before terminating at Sonnyvale. Just outside of Sonnyvale, a short branch takes off from Fenimore Jct. to serve the industrial area of Fenimore.

More esoterically, Kip's layout is part of a small group of layouts in my mind that I'm beginning to call "Jewel" layouts - small to medium sized layouts that do one thing very well and are, for the most part, finished. Not overwhelming at all in scope, they convey the essence of local, retail railroading through small-to-medium sized towns and typically include - or are themselves - a branch line of a larger railroad. Other than Kip's D&H Sonnyvale Branch, I'd include in this esteemed group (in reverse chronological order of when I visited them), Ken Karlewicz's Cherry Valley Branch, and Jim Dufour's Cheshire Branch of the B&M.

Sound familiar? Yeah, a "jewel layout" is kinda what I hope my Valley Line will be someday.

I first saw Kip's layout in person during last year's "OP"toberfest, and made plans even then to visit again as soon as possible. Alas, my next visit didn't come until a year later, but - as I expected - even though I don't think he's changed or added much since last time, I saw a lot I didn't remember seeing before. It's so full of "modelable" details and interesting scenes, that you can't possibly take it all in during one visit. As testament to this fact, I probably took 3 times as many photos this time as last time!

But enough of me trying to describe it - I'll let the pictures do the talking, 1000 words at a time... 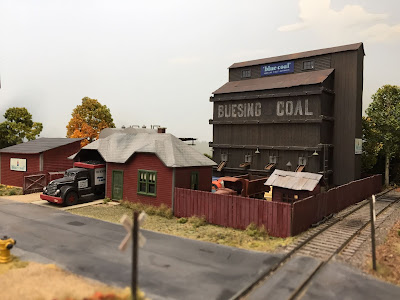 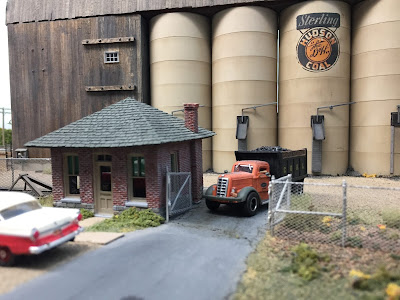 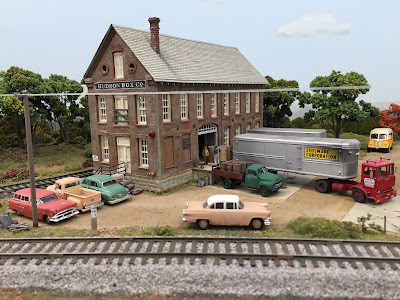 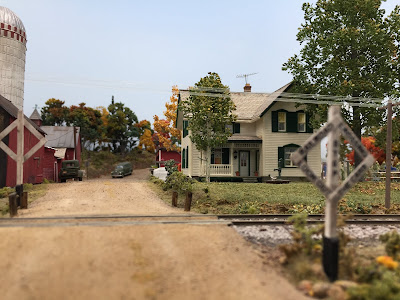 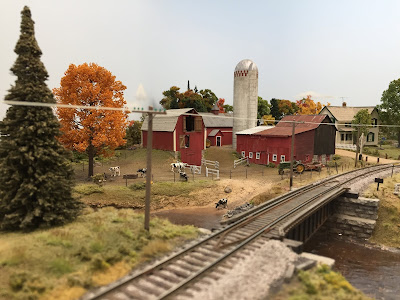 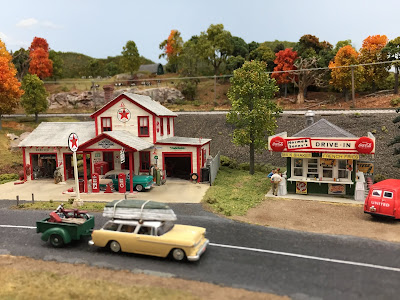 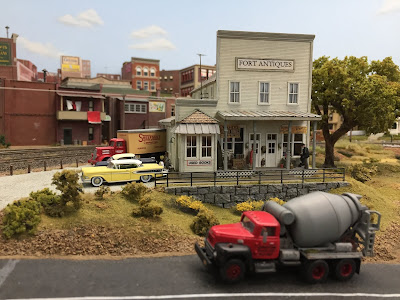 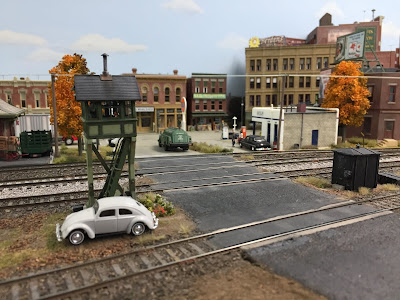 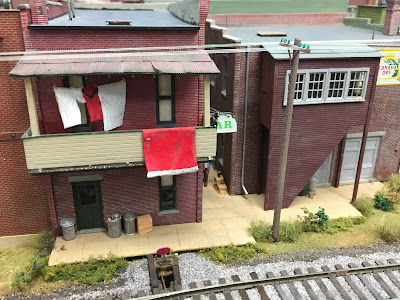 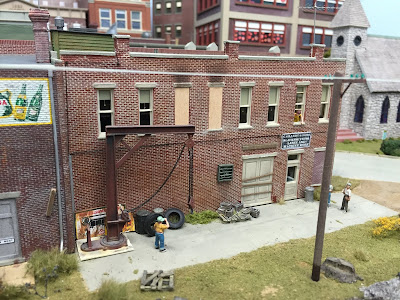 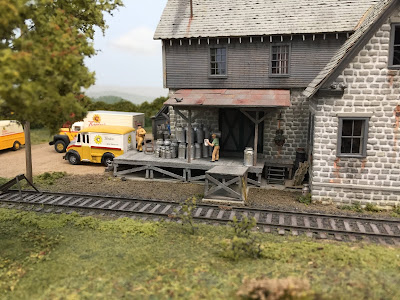 I purposely avoided saying too much about any of the photos since I think they really do speak for themselves. If you want to see more of an overview of the layout - with "overview type" (rather than closeup) photos of Kip's layout - including descriptions - be sure to click here and scroll down towards the bottom.

Hopefully, these photos give you at least a little taste of what I mean by a "jewel" layout and - even more - that they inspire and motivate you to work on your own efforts. That's certainly what *I* plan to do!
Posted by Chris Adams at 6:19 PM 2 comments: 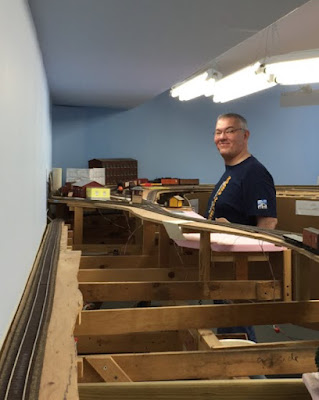 After a thoroughly enjoyable morning of operating large scale trains, I have to admit it took a bit of time to get reacquainted with operating in HO scale, but Ken Nelson's layout provided the perfect contrast. Being in operation for over 30 years, the freelanced Poco Valley Lines is more of a traditional model railroad rather than some of the more prototype-based layouts which have become popular in recent years. But that made it no less fun to operate, with a large number of trains running through some really cool scenery.

Hopefully the pics will give you a some sense of what it was like . . .


Having operated on three different layouts in two different states in less that 24 hours, "OP"toberfest was about as close to an "op til you drop" event you can get. While I wasn't quite ready for it to end, I was thankful when I realized we had a couple of hours between Ken's session ending and the annual dinner. I took a quick nap (the "drop" part....) so was recharged enough for the fun of seeing old friends and making a few new ones over a great spread.

Special shout out to Dean S who was kind enough to seek me out to let me know he follows the blog and special thanks to Doug and his crew for organizing another wonderful operating weekend!
Posted by Chris Adams at 1:22 PM 2 comments:

I'm running a bit behind in reporting all the cool layout visits I've been lucky enough to do so far this autumn - primarily because I've been busy doing other stuff (some fun, like working on the layout & other operating sessions, some not-so-fun like crazy day-job antics). So please excuse the increase in pace here - I just hope it doesn't detract at all from fully sharing the amazing layouts I've visited lately!

Pete and I had wangled our way into an invite to see John's layout after "OP"toberfest last year. We registered too late to operate on it, but heard so many great things about it we decided we had to at least see it. Well, John graciously agreed to have us visit - and after that visit, we decided right then and there that we'd have to register early for 2019 and have John's layout be at the top of our list.

The photos will make the reason clear... 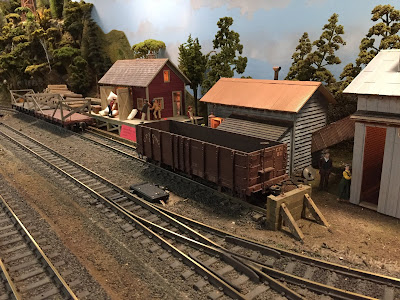 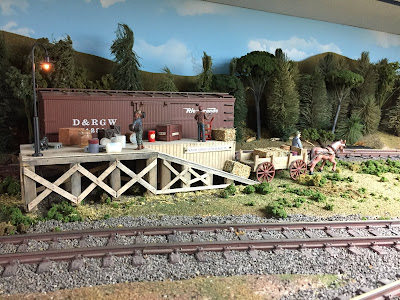 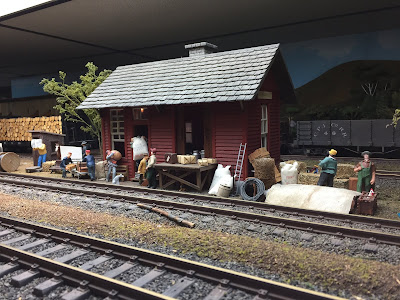 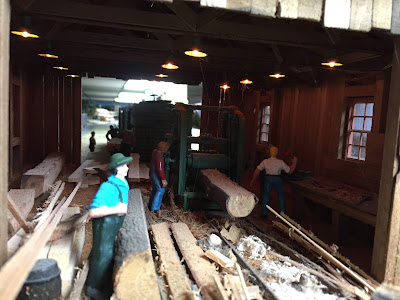 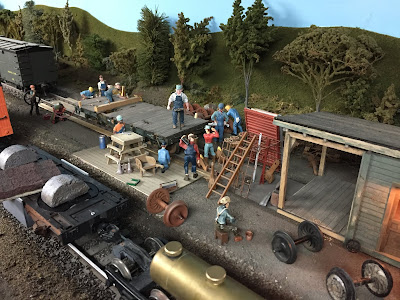 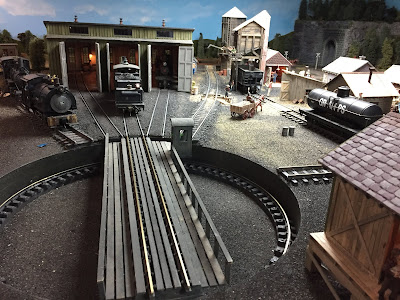 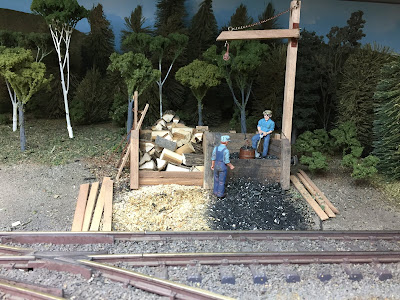 I mentioned earlier the treat of seeing a large-scale Shay operating.... well, if a picture is worth a thousand words, what's a video worth? Enjoy!


If you ever get the chance to visit - or, even better, operate - on John McBride's layout, definitely do it! But beware - like me, you might just be tempted to sell off all your current RR stuff and change to G scale!
Posted by Chris Adams at 12:27 PM No comments: