R-1 on PDX-2 at Old Saybrook? A Few Words about Wordless Wednesday #181

Another Photo Library find, scanned from a slide which is likely a copyphoto of an original print, long since lost. It shows what may be PDX-2, the westbound Shore Line local, since it's on Track 5 in Old Saybrook. If so, it's likely leaving cars for its counterpart - PDX-1, the eastbound local from Cedar Hill (New Haven) to Fort Yard (New London).

But it could also be one of the few daytime through freights on the Shore Line, taking Track 5 to allow a westbound express to pass it on Track 1. According to the info I've compiled on trains through Old Saybrook, there were only two westbound freights during the daytime in 1947:
If it's one of these trains, he's likely running late and getting out of the way of the westbound Roger Williams - OS at OS (Saybrook) and due to make a station stop at 9:25.

But maybe it's none of these - neither local nor through freight. For all we know, this could be a detour move, justifying the taking of a photo of something other than "just a common freight train."

We have no date or other information, and since it's such an overcast day we have no clue as to what time it might be so what train this actually is remains a mystery locked in time.

****
Just for kicks compare this photo - not of the same train (note the consist), but certainly a similar move: 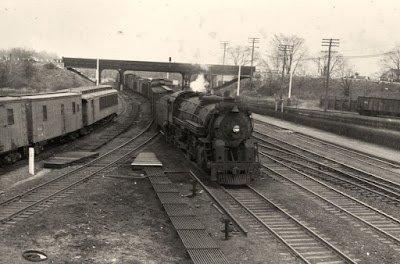 Considering it's coming in on Track 7 and the consist appears relatively short, this could in fact by PDX-2. In which case, we've got some pretty impressive power for a local. Then again, even the Air Line local - with even fewer cars typically - had an R-1 for power from time to time.

We can get SO much info from a photo, if we actually know what we're looking at. Unfortunately, the more time passes the more the significance of what we're seeing will elude us. But it's still amazingly cool to try and replicate these scenes in miniature!
Posted by Chris Adams at 3:30 AM