One of the cool contrasts I'm trying to replicate on my layout is the difference between the 71-train-a-day mainline in Old Saybrook versus the meandering 1-wayfreight-a-day branchlines. As I've mentioned before, all the mainline turnouts in Saybrook are remotely operated by the tower (I even built a control board based on what was contained in SS 214), but out on the branches, they're all manually controlled in keeping with the prototype.

Consequently, all but one of my turnouts are from Micro-Engineering which have a center-over spring that locks the points in place - you push the points over and they'll "click" to the other side. No fuss, no muss, no machine, no wiring. Of course, for the turnouts on the mainline in Saybrook, you have to remove that little spring so that the points can be moved by a machine, but on the rest of the railroad you just push the points over.

For the most part.
Here are the three other ways I manually control my turnouts.

Once you remove the little center-over spring - and glue the turnout in place - your options for going back to manual control are, um, somewhat limited. One way would have been to go to the trouble of removing the turnout and reinstalling the spring. But the above solution was MUCH easier, though less elegant. I just used a Caboose Industries ground throw, modified with a little bent wire to pull/push the points back and forth. The ground throw isn't exactly scale, but that's ok since it's right next to the liftout (this area isn't going to be a focus). And it's effective and just about bullet-proof.


This location is just south of the grade crossing in Rocky Hill and partially scenicked already, so I didn't want to use an oversized ground throw here. The center-over spring had failed (or otherwise disappeared somehow) and was leaving the points flopping about. So I improvised, taking a spare spring and installing it directly on the ends of the ties. It works "fine" - not as snappy as it came from the factory, but it still works and saved me having to rip up scenery to replace an otherwise fine turnout.

Finally, I tried a more mainstream solution - and ironically in a location where it wouldn't have been a huge deal to remove/replace the turnout. But there was no need - the turnout (and center-over spring) operate just fine - it was just difficult to reach. So I used a tried-and-true remote operating solution. 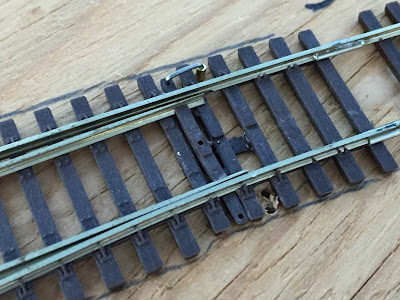 First, I drilled a hole through the plywood between the ties and press-fit some copper tube. 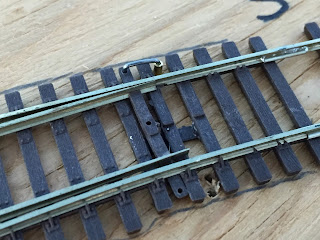 I then inserted wire and bent it (as you see above) to go into a hole drilled into the end of the throwbar. 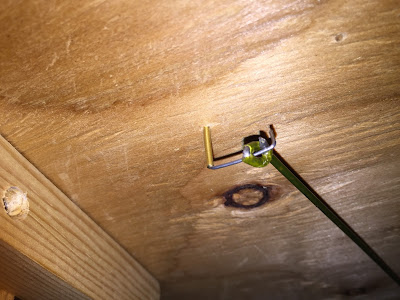 Underneath, I bent the wire again, as above, to allow me to put a coat hanger actuating rod on it (and bent the wire up at the end to keep the rod from coming off. 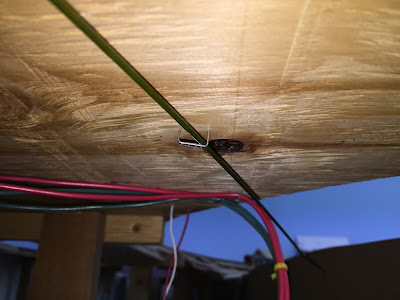 The coat hanger goes out to the edge of the layout and through the fascia, supported by staples, as you can see above. 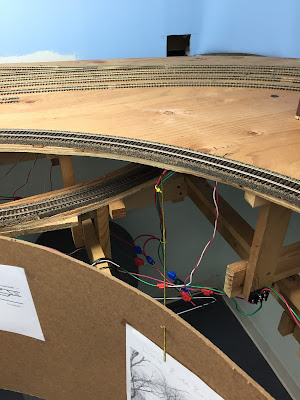 The result is a pretty simple and straightforward way to "push the points" remotely and it works like a charm. The only other thing I did was glue a wine cork to the end of the coat hanger to keep it from snagging on anybody's clothing. This also has the effect of causing folks to use their fingers to gently pull/push the wire rather than be too ham-fisted.

I really like the ME turnouts' ability to install and operate with no other machine or actuator required - just push the points. But if for some reason you removed that capability and want to restore it later - and you don't want to remove or replace the turnout - I think you'll find one of the solutions above worth trying.
Posted by Chris Adams at 12:08 PM