A Few Words About Wordless Wednesday #183 - A Conduit Tale 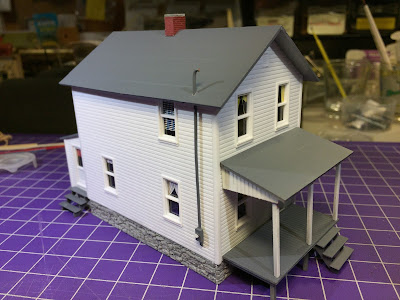 As I was wrapping up the final construction post for the Goff Brook Farmhouse and posting the "finish pic" above, I mentioned that I could just "visit the prototype and see what it looks like" to get a guide on how to weather it. 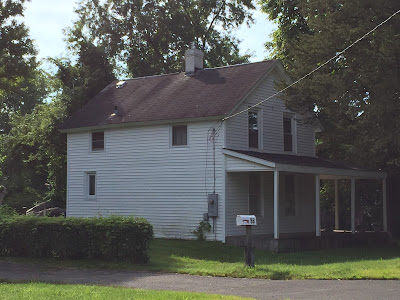 Well, I clicked over to review the prototype shot I'd taken - and got a bit of a shock. See what I did there? A hint is in the title to this post - as well as in the pun.

Yup, I'd inexplicably poked the electrical service conduit through the roof(!) Now, in my defense, I had consulted a very thorough clinic on how to model electrical service, and coulda swore that's how it was supposed to be done. But when I went back to check, it looks like the conduit only goes through the roof when it's necessary to get the weather head at least 10' above ground (low sheds roofs, etc). Otherwise, it's safest to have it under the eave - and less chance of someone on the roof coming into direct contact with the weather head & wires.

I should have reviewed my prototype photo earlier.

Now, I was going to see if anybody would notice - but the problem with me is that now I had noticed. And I've been down this road often enough to know that the hemming/hawing/vacillating about whether or not to fix it often takes longer than actually just fixing it.

So I decided right away to go ahead and fix it. Here are the steps I took (in case you ever find yourself in a similar situation which - hopefully now that you have the benefit of my experience here - you won't): 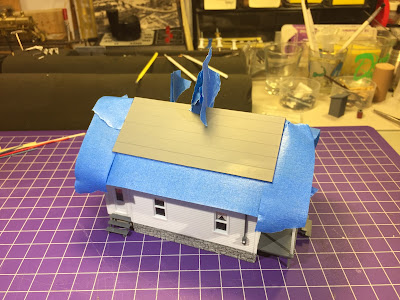 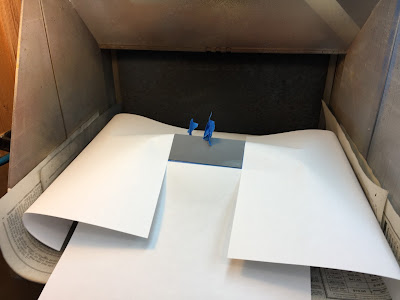 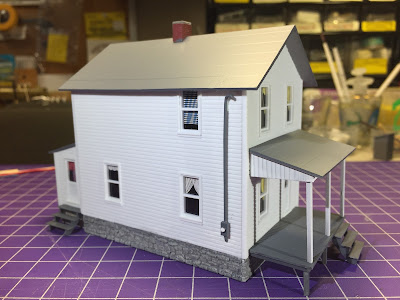 I think it looks MUCH better - and it's hard almost impossible to tell where the hole in the roof was. Unfortunately, I had a bit of stray masking tape around the chimney which caused a little flare of spray on the roof. And yes, that bugs me. Not enough to RE-respray the roof - but enough to encourage me to get to weathering, which covers a multitude of sins.

I've certainly learned a lot through this build and have built up my confidence that I can recover from most mistakes. But if I'm doing it right, I'm only making new mistakes - so the learning continues . . .

Hopefully my sharing all the fun and folly along the way has been at least a little entertaining, if not super educational!
Posted by Chris Adams at 4:30 AM