To those of you in the US - Happy Thanksgiving! And no matter where you are, here's hoping today - and every day - you're able to enjoy some quality time with your family, despite the current crazy circumstances.

Speaking of crazy, the crazy long work hours I mentioned in my last post may finally be calming down from "crazy long" to just plain "long" :^) so I hope to be able to get to the layout a little more often than just a few hours on Sunday afternoons. But even a small block of time can be very productive if you have a specific project in mind, and the materials on-hand to do it.

By way of quick background, "New London" staging represents Fort Yard in New London, Connecticut, where trains from the east (Providence, Boston), and northeast (Worcester, Maine) will originate on my layout. Also, as on the prototype (though not modeled), there's an interchange with the Central Vermont at New London as well. The staging yard itself is - and will remain - "off stage" to support the illusion that the trains coming from there are coming from "the East or Northeast." As such, it's located in my workshop (an unfinished portion of the basement) - WAY offstage from the rest of the layout. Unfortunately, that also means it's subject to dust and such.

Thus the "boxing in" which was the subject of my last post. And here's where things stood at that point: 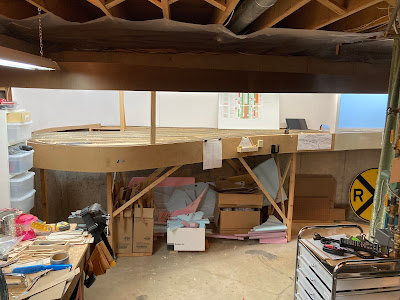 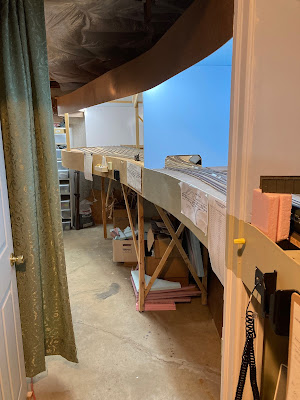 Like many/most layout owners, I take advantage of the area beneath the layout for some storage. In this case, I gathered all the random construction materials (foamboard, cardboard) from around the rest of the layout and put it all here. That certainly decluttered the rest of the basement, but now I had all that clutter here.
And what's the best way to deal with clutter? "Get rid of it" you say? Well, I suppose you COULD do that. But what if you're convinced you'll need it "someday?"
Just hide it!
And that's what I did, with some super simple and inexpensive skirting . . . 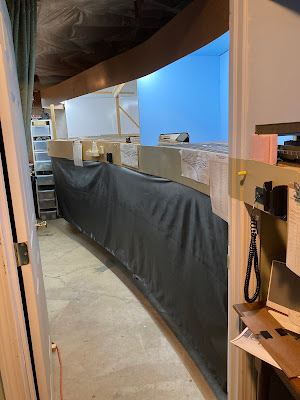 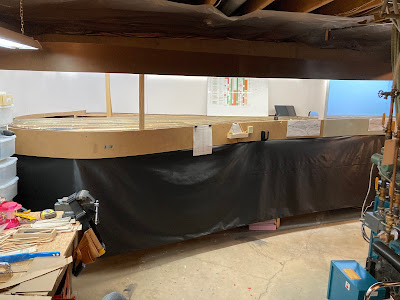 But, despite the inexpensive nature of this approach, you can see it gives you all the visual benefit of more elaborate (and expensive) skirting. And it literally took me about 30 minutes to do - start to finish.

Now, admittedly, my standards for a staging yard in an unfinished portion of the basement are a bit, um, "lower" than they might be on the rest of the layout. In other words, I haven't decided yet whether I'm going to use landscape material for all my skirting. But given how quick and easy it is to install - and given how outrageously expensive curtain material would be for a large layout like mine - I may just figure that it'll do just as fine a job and blend into the background.

If folks are paying any attention to my skirting, the layout isn't as compelling as it should be. And we can't have that. :^) 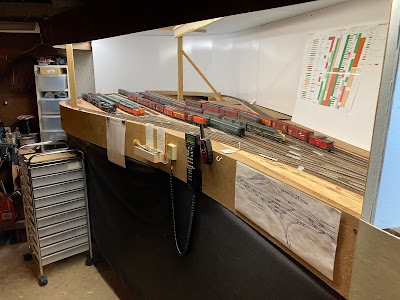 One final step I took - and which, unfortunately isn't really easy to notice in the photo above (so click on it for a larger view) - is that I "filled in" all the open areas (except the access hole in the back left corner) with cardboard. Not only does that cover the remaining benchwork, but has the practical benefit of keeping things from falling to the floor. And that's a good thing. 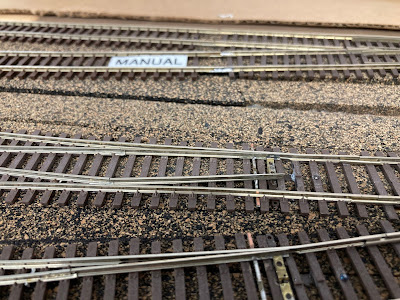 What's not such a good thing is discovering a switch point that has come unsoldered. UGH! I don't know whether all my vacuuming of the yard pulled up this point, or how it might have happened, but fixing it is now at the top of my to-do list for the next time I have a spare 30 minutes or so to get back to the basement.
Here's hoping you're able to get to your layouts as well - whether today (if you have the day off) or sometime during the upcoming weekend. In the meantime, here's wishing you and your families health and happiness today and during the upcoming holiday season!
Posted by Chris Adams at 5:58 AM 1 comment: 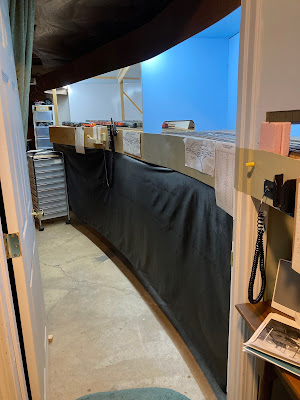 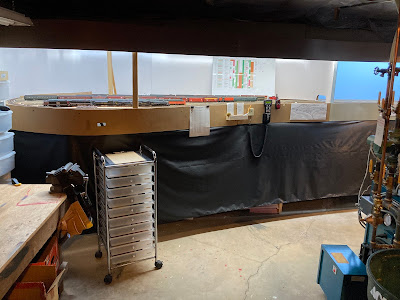 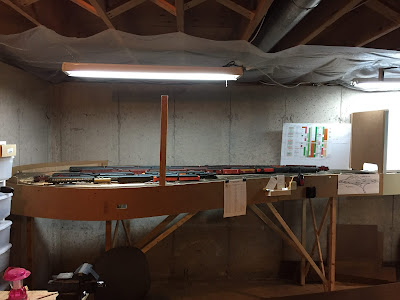 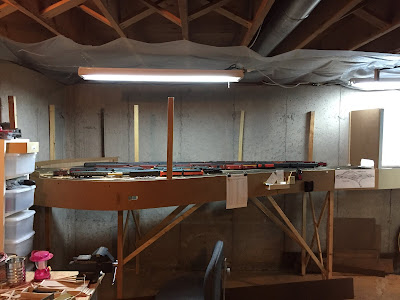 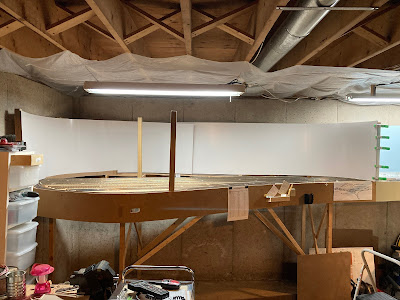 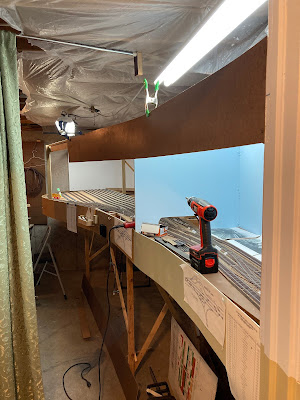 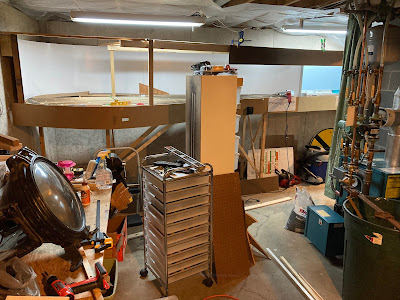 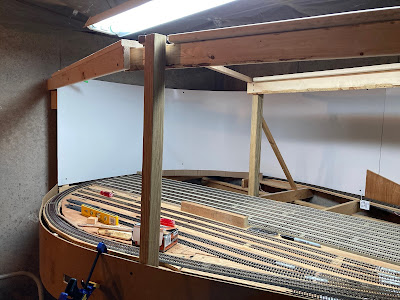 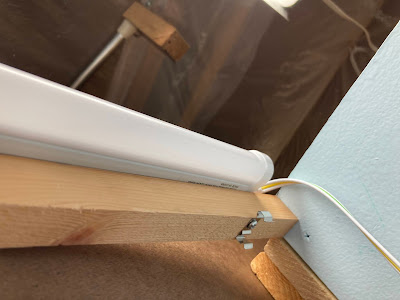 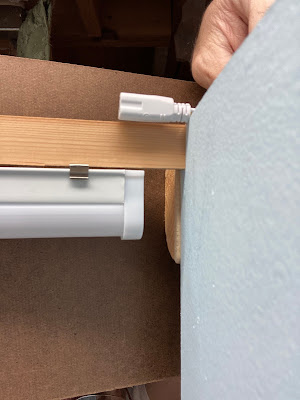 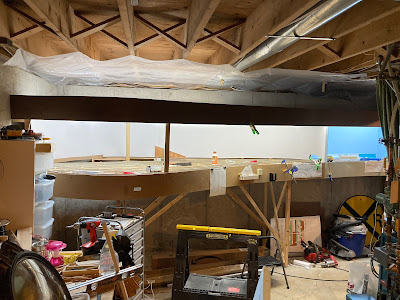 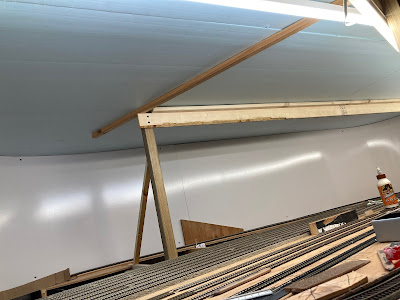 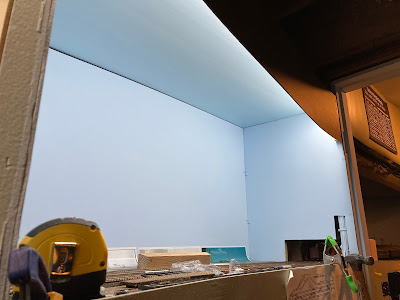