Back to the Basement - Messer Motivation

Well, I finally made it through another legislative session. We adjourned this past Wednesday at midnight, per our state constitution, but we failed to accomplish the one thing we were supposed to during this long/odd-numbered year: setting a state budget. So we'll be in (")special(") session for the foreseeable future. That's the bad news. The good news is that special session shouldn't have nearly the amount of nonsense work as the last couple of months,

So, I'm able to get Back to the Basement. It's been a solid month since I was able to post any progress, but in the meantime, I have been able to get the odd thing done here and there. I finally finished the cab bus, having moved a couple of plug-in panels to what I hope are the final locations. And I installed one final "branch" plug-in, made from a telco jack (as here). Lastly, I branched off the cab bus one last time to run a line to behind the Agent/Operator's desk for a fast clock(!) The Missus got me one for our anniversary this past weekend and I have only to make a little box/mount for it before putting it on the desk. It'll come in super handy when trying to keep track of all the Shore Line trains...

Despite being distracted by the Shore Line & DCC stuff whenever I've had a few moments these past couple of months, it's time to get back to working on Wethersfield. And my friend Dave Messer sent me the perfect motivation to do so: 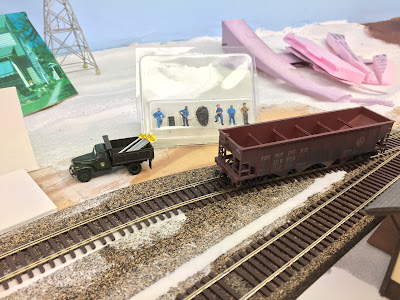 There's a scene both he and John Wallace recall from their youth in Wethersfield - I'll let Dave tell it from the note he sent with the truck and figures above:


"Coal for the prison was unloaded at the Church Street siding directly opposite the Kel-Strom Tool Company [across the tracks from the station] by prisoners called "trustees" who were allowed outside the prison with only one guard without a gun."

The coal was for the power plant at the state prison in Wethersfield, about 3/4 mile away. And it was unloaded from the freight cars by hand. When I first heard this story, I'd planned on replicating this scene with "typical" prisoners in striped garb. But John remembers them being in all denim - and Dave has the "trustees" appropriately dressed. I've placed them where they'll eventually end up - right at the north end of the bulk track (Kell-Strom wasn't built until after my era - 1952?). The truck is carrying era-appropriate "stop" signs, another gift from Dave.

With these cool details on-hand, not to mention that it's been almost three months since I was last in Wethersfield, it's high time I get back to it.

But first, I have to confront and clean up the mess I left from last time...