Now that I finished the Wethersfield Lumber Co. shed, it was time to put it back on the layout. The siding goes across a-slightly-uneven joint between the plywood and foam board, and I also wanted to raise the shed in order to lower the track relative to the shed floor. 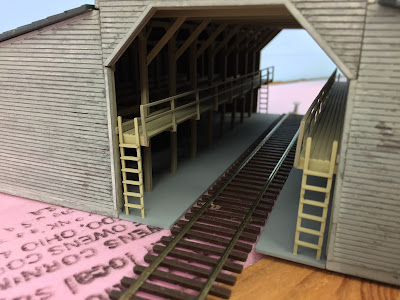 The photo above shows a couple of things: 1) the necessity of lowering the track (I want the tops of the rails to be about even with the top of the shed's floors; and 2) how empty and clean the inside of the shed is. This is one of those times when I think I moved too fast, putting the roof on the shed before weathering and detailing the interior.  Any suggestions on how to remedy this (short of undoing the assembly that I did!) would be most appreciated! 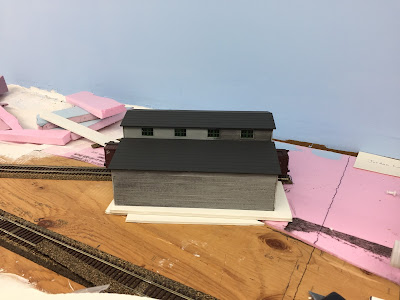 I took some time to position the shed on the track. I'd had it right at the end of the track, but then it occurred to me the I could get two boxcars in the shed at once if it was located far enough down the track. As you can see above, only the ends of the cars are exposed to the elements - the shed provides plenty of shelter for unloading through the cars' doors. (heh - need to unload LOTS to fill up that empty shed!) 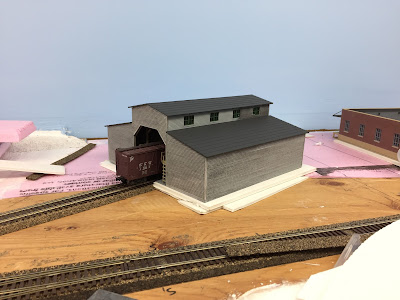 This is a better view of the layered foam core I used to provide a nice level, heightened base for the shed. I used full-thickness HO cork roadbed until I got to the foamboard, then N scale cork in the shed. With the shed resting on the foam core, and the track on the N-scale cork, the shed's floors were at the right height in relation to the tops of the rails. 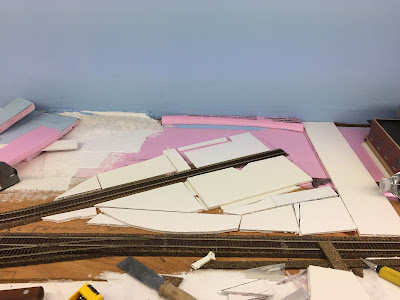 Raising the shed required the surrounding topography to be raised a bit as well. I could have troweled on an extra-thick layer of ground goop, but decided to save some of that by hot gluing scraps of foam core around as "fill."

While that was drying, I decided to move over to the Ballantine's Beer Distributors site (click here for more about the Ballantine's industry). Again (poor planning I guess), the track of the siding spanned the joint between the plywood and the foam and the foam was a little too flexible for my liking (this was back when I used 1" foam; now I used 2" for a base). 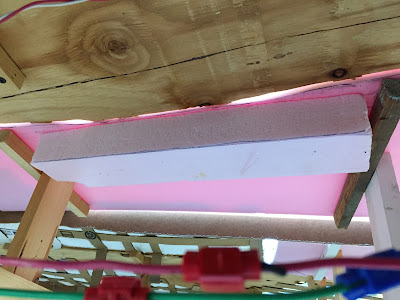 Instead of replacing the 1" foam, I decided to brace it with some scrap 2". As you can see above, all it took was hot gluing the 2" foam to the bottom, and holding it in place until the glue cooled. Problem solved: no more flexy! 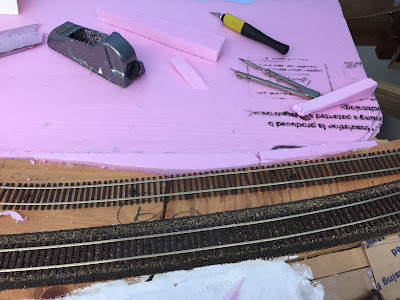 In the photo above, you can see I hot glued some scrap foam to fill in a gap where the track will go. I then rasped it down to level everything out. 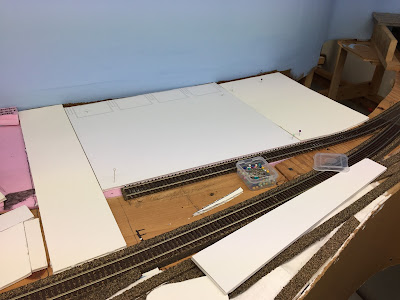 Here's the Ballantine's siding, straddling the plywood and foam as I described above (you may have to click on the image to enlarge to see it). Like Wethersfield Lumber, I decided to provide a level base for the Ballantine's building, as well as the parking lot. The long straight foamcore on the left is the base for Jordan Lane in Wethersfield. 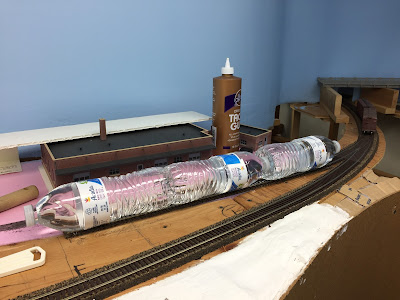 I used N scale roadbed again so the siding will be lower than the main, and also to raise it a little above the plywood. That way I can use a layer of ground goop to provide some subtle undulation to the terrain. Just painting the plywood wouldn't do that. Finally, I used some Aleene's Tacky Glue to glue down the track and my handy-dandy water bottles to weigh it down while drying. Incidentally, you can see a glimpse of the Ballantine's building in the background. Click here for the build thread. 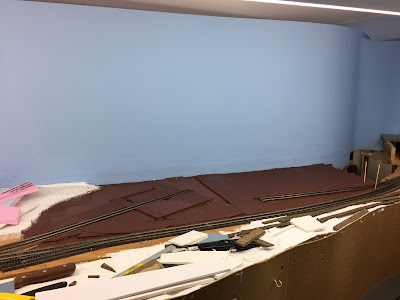 I decided to do a quick paint job to hide all the white, pink, and blue foam. Looks better already! 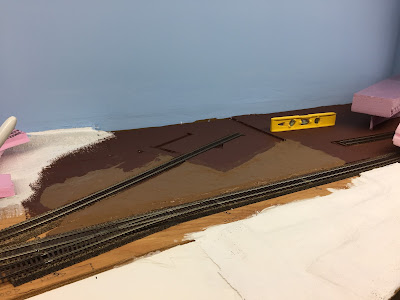 I then  used up some left over ground goop to even everything out in the lumber yard lot. 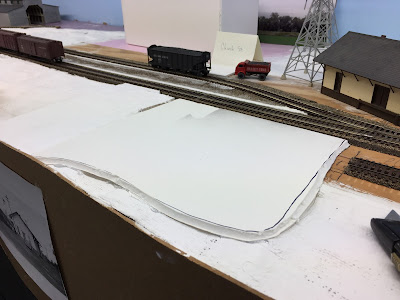 Apparently, I was in the mood for more foam core and hot glue - here I'm providing a base for the Wethersfield station/freight house and lot. Note how I cut the edges at an angle to make it easier to fade in to the surrounding area with ground goop - once I make some more. That's the end of the house track peeking in at the right. 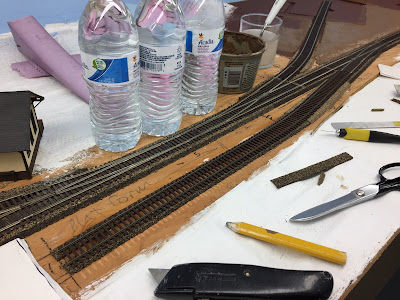 Here's a better photo of the house track/siding - showing the N scale roadbed, split and separated in order to be wide enough to support the track. I'll fill in the space with vinyl spackle later. I made sure the siding was far enough from the main to fit a loading dock/platform in there. 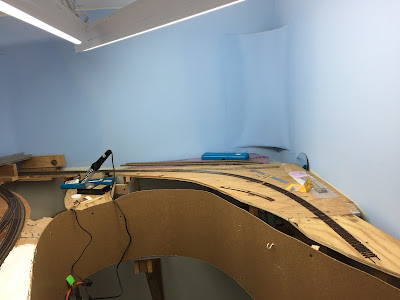 I then turned my attention to East Berlin. Turns out, this is the last "unfinished" area of the layout, track-wise. The prototype is at the end of a branch that starts at the north end of Middletown yard. Historically, the line had gone all the way to the Berlin station on the Hartford line - but it had been cut back to East Berlin by my era, and was left in place to serve some local brickyards and Stanley Chemical Co. (makers of paint and such).

True to the prototype, my Berlin Branch also comes off the north end of Middletown yard, goes across the Mattabessett River on a short plate girder bridge (hidden behind the soldering iron) and terminates at Stanley Chemical (long siding coming toward you). Two main compromises (a.k.a. use of modeler's license): 1) I'll have a brickyard served from the "old main" (track at the back) rather than along the way (there really is no "along the way" between my Middletown yard and the Mattabessett River); and 2) East Berlin is physically right next to Wethersfield (just out of sight to the left). But operationally, it'll work fine.

So, not a lot of progress to show - especially given the amount of time I spent - but it was a very enjoyable weekend and even a little progress is better than no progress at all. Remember - you can eat an entire elephant just one bit at a time . . .
Posted by Chris Adams at 6:47 PM