Turned out to be a fun day in Valley Local land today, but first, a quick progress photo of mocking -up Valley Coal in Wethersfield: 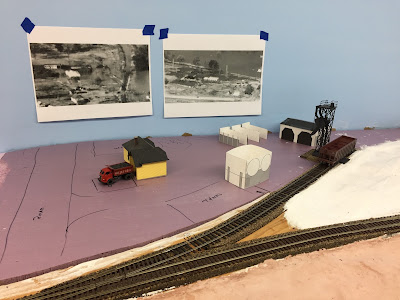 PeteL graciously loaned back to me the mockups that BillS made for Chapman's in Old Saybrook and they turned out to be nice stand-ins for the bins, shed and tanks at Valley Coal. Unlike Chapman's, though, these mockups are nowhere close to or as extensive as what was actually at Valley Coal, but something along these lines may be all I have room for. And I don't even have the rear of the Webb Theater in the scene yet (it'll be right behind the office/scale house).

Since I've been working in Wethersfield (and the progress is, admittedly, painfully slow...), DaveM has been encouraging me and firing my motivation by supplying exactly the sort of detail I want to be sure to include as the scene finally finishes... 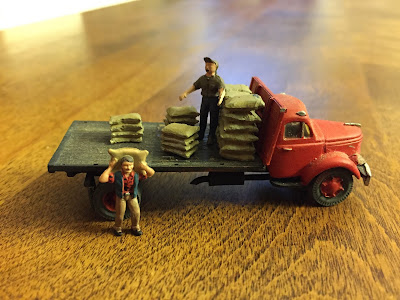 This crew - along with their truck - came in today's mail and will be placed near the Gra-Rock siding just south of the Wethersfield station (freight house). They're unloading onion seeds for Hart Seed Co. Just need to get an appropriate reefer (or boxcar?) from a RR that serves onion producers and spot it at the bulk track just south of Church Street in Wethersfield. Thanks Dave!! 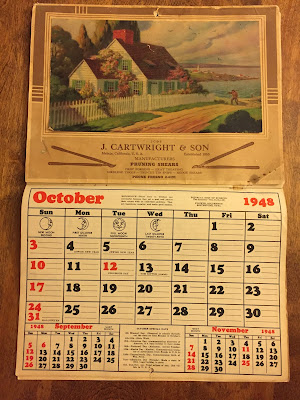 Since I won't be all-steam any time soon (brass locos still need to be painted and decoder-ized), my "official" era of the moment is October, 1948 - right after the PAs arrived on the Shore Line, RS-1 0669 is on the Haddam Local (PDX-2), and RS-2 0510 is brand-new (and plausibly being tested on the Air Line). So, of course, I needed an era-appropriate calendar! The graphic actually has a story as well. I've often mentioned to the Missus that my dream house is a Cape on the Cape (Cape Cod) coast with a picket fence and rose trellises (don't tell anyone). Well, when I found this on eBay - and saw that the caption was "My Dream Cottage" (really! zoom in to see), I just HAD to get it.

And, let's just say, it's a just a bit less - ahem - risque than all the other 1948 calendars I saw and considered purchasing. Suffice it to say, while what I have now is an authentic 1948 calendar, an Esquire calendar would probably be more era-appropriate in a RR Agent/Operator's office!

ANYway.... speaking of the RS-1 and RS-2, here they are in Saybrook going through some testing yesterday (Chapman's Coal & Oil is there back left).... 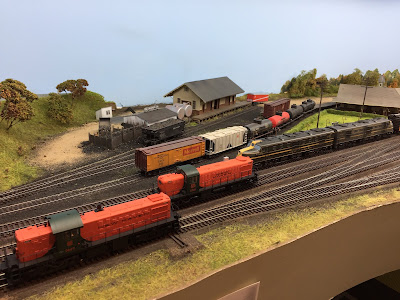 I've been trying to dial-in the Loksound decoders and have the RS-1 pretty well there. But the Proto 1000 RS-2 still has a pretty low top speed, no matter where I set the trim and momentum. The DL-109s in the background need no adjustments at all - they're dialed in pretty nicely already (though I do plan to change the pitch of each of the prime movers slightly so that they don't sound exactly alike).

There's just So Much To Do - but all good and all fun. I guess that's why it's called The World's Greatest Hobby!
Posted by Chris Adams at 5:40 PM