A Tease and a Tip

The control panel is mounted! 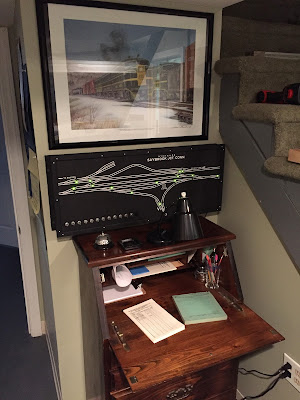 But this is just a tease for now - although it looks like it's done done, with LEDs lit up and all, it actually still needs to have all the switch machine power wires connected. I'll get into that when I do my post on control panel wiring. Click on the image to embiggen, It should be at least a little reminiscent of this: 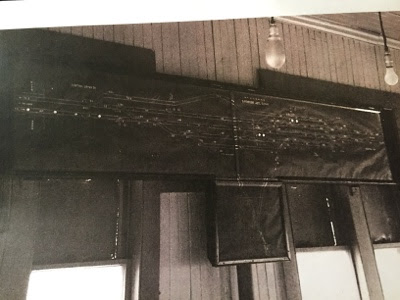 Of course, I don't have an actual tower to mount the panel in, but mounting it above the Agent/Operator's desk I have is the next best thing, I think.

So I just have a little bit of wiring left to do. I've mentioned before How Much Wiring there is in this thing - and it's not even that complicated! But I had to wire up a dozen DPDT toggle switches (the first 6 were done by Pieter and Dick - thanks again guys!) and they had to be wired so that I could reverse polarity (and thereby, reverse the direction of the switch motor and move the points on the turnouts). That meant I had to come up with a good way of making that little "X" of wires that has to go between 4 of the 6 poles on a little DPDT toggle.

So here's a tip I came up with - follow along and let me know if it makes wiring these things easier for you too... 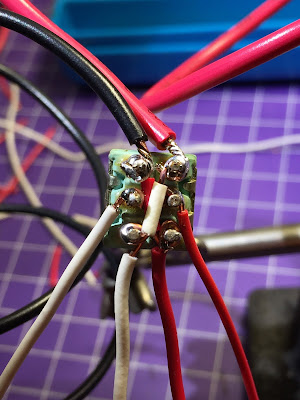 We'll actually start at the end - the above pic is where I had to end up for Every Single Toggle.


The wires I'm gonna show you how to do - and which were really difficult for me to do until I figured this out - are the ones going from "southwest" (lower left pole) to "northeast" (upper right pole) and vice versa ("southeast" to "northwest"). These are the wires that allow the toggle to reverse polarity. 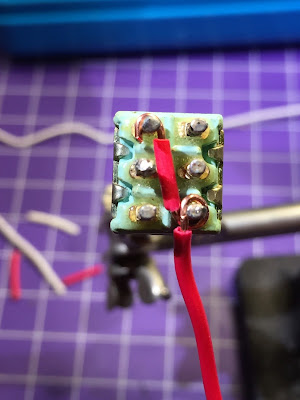 The key is to remove about 1" of insulation from the end of the wire, then make a loop to go around the first pole. The pic above shows what you're trying to accomplish. 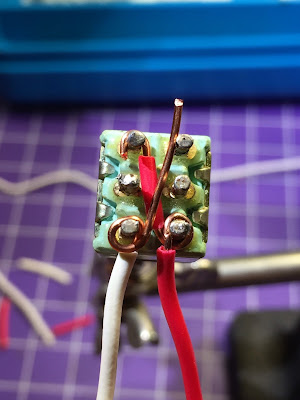 Here's a better pic (above) showing how I start. I've done the red wire already and just started the white wire, having removed 1" of insulation and made my loop. 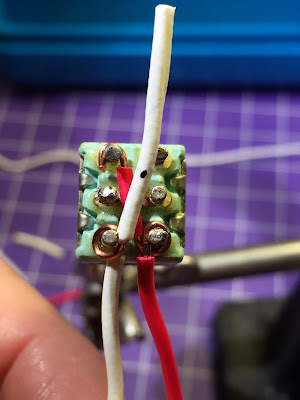 Then I slide the insulation back on and mark where to cut it.

Next, I take the insulation back off, cut it, slide it back on, and make my "hook" in the end of the wire - like this: 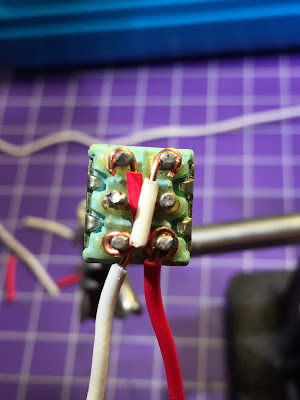 It actually takes about as long to describe as it does to do. But, as you can see, the result is a VERY compact wiring job that keeps everything all nice and snug and - most important - insulated.

At this point, all I had to do is add a little flux and solder. Alhough the resulting "mechanical" joints are actually pretty strong all by themselves, you'll still want to solder the connections to keep things from coming loose.

If you try this out, be sure to let me know how it works out for you. And if you have a better - or even just a different - way to do this, let me know! 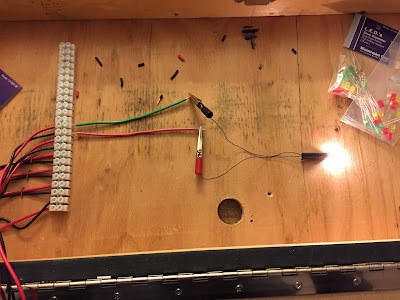 It's not bad enough that I'm so cheap I actually wired up an old 12v bulb to two alligator clips for testing track and such (rather than buy an actual current tester). But I was also too lazy to remove wires I'd already screwed into the terminal strip to test them (I'd forgotten to test them beforehand). No problem - just clip your El Cheapo tester to a couple of scrap pieces of wire and stick'em into the strip.

Looks like the wires work after all! (just don't stick those wires into a wall socket...)

I've got a small work session planned for tomorrow evening wherein I'll (hopefully) finish up the control panel wiring and test all the switch machines. Here's hoping everything goes smoothly. . . As much as I've enjoyed doing the control panel and am very happy with how it's coming out, I'll be ready to dive into something new.

Speaking of which, what are your thoughts on Tortoise switch machines? I have just a few more turnouts I'd like to power and am considering trying them out . . .
Posted by Chris Adams at 12:30 AM