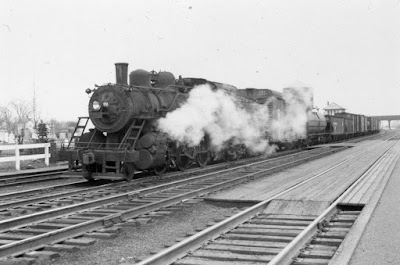 When you first start out as a prototype modeler, every little discovery is new and exciting. But as you get more and more into your area/era, it becomes harder and harder to find new stuff. That's just the way it is with research - additional new discoveries are the first victim of success. So any time you can find an image of the area you're modeling that you've never seen before, it's HUGE!

Such is the case with the photo above. TomD was going through images from a collection recently donated to the Photo Library when he discovered this gem. So let's have some fun unpacking it . . .

First off, it's likely the westbound Shore Line local - aka Providence Division Extra No. 2 (PDX-2), aka "The Haddam Local" - that ran between New London (Fort Yard) and New Haven (Cedar Hill Yard). I'm not sure of the date, but the other shots I've seen of this train have K-1d mogul  #363 on the point (at least until J-class mikados took over the Shore Line locals, shortly before they were dieselized with DEY-5s (Alco S-2s). This train has K-1d #423. According to John Wallace, the 423 was "spare" at the East Hartford roundhouse during the late 40s and - even more interestingly - it was the first engine he ever operated. So either this image dates from before the late 1940s (since it's unlikely E.Hfd. would have supplied power to New London), or it's actually a shot of the Valley Local making a rare (but not unheard of) trip all the way down to Saybrook.

As for the month, given the condition of the trees and the volume of steam condensate, I'm guessing November to March - it certainly appears to be cold - but not a hint of snow. So my best guess is a November/December photo of PDX-2 from the early/mid 1940s - but until I can get an Engine Assignment book from before 1948, I'm at a loss to know for sure. Maybe the freight cars will help date it...

And for that, BillS weighs in:


Too bad we can't get any reweigh dates off the cars - heck, we can't even get the roadnames off most of them!

Other things to note:


Wow - that's a lot to get out of one photo, but as you can tell, it's quite a treasure trove of information. Thanks VERY much to Tom for finding it and bringing it to my attention. Looks like we have some additional detailing (and a few minor changes) to make to the Saybrook scene. . .
Posted by Chris Adams at 8:16 AM