Last of the Cab Bus

I've always intended to run my layout using wireless throttles. This is due less to my sophistication than to my laziness. I don't particularly like wiring, and the idea of having to wire the entire railroad for a cab bus after having already wired it for track power was not appealing. And besides, the idea of being tethered to the fascia - not to mention the likelihood of getting tangled up in said tethers - was a huge turn off. So, up until a year ago, I only had one throttle plug-in panel on my entire railroad - and that was only to have someplace to plug-in to program locos on the programming track.

But during an ops session last March, BillS's wireless throttle died and, though it would work tethered, there was only one place to plug-in. So he was effectively out of the session. I resolved then to install "at least a couple" of plug-in panels around the railroad (bonus - friends can bring/use their wired throttles if you're short-throttled...).

So last May, I installed a minimal cab bus - just enough to get one panel in each aisle. That was better than what I had (4 panels now rather than one), but I quickly learned that I needed to extend the bus even further to reach the east end of Old Saybrook.

Now that the Shoreline trains are becoming more important for operations (and I discovered after the last ops session that I really need to reduce congestion at Saybrook), I've decided to bite the bullet and install even more plug-in panels. I got the requisite panels - as well as a power supply - at Tony's at Springfield last month, and got some additional supplies at my new candy store - Cables & Connectors in Newington, CT (which fills a critical vacuum since Radio Shacks are now so hard to find).

I now have a total of eight UTP plug-in panels, plus a "dead end" plug-in at East Staging. The UTP at Essex even has additional power to it, ensuring that the bus will have enough juice to run everything as flawlessly as possible. Check out the photos below to see what all I did . . . 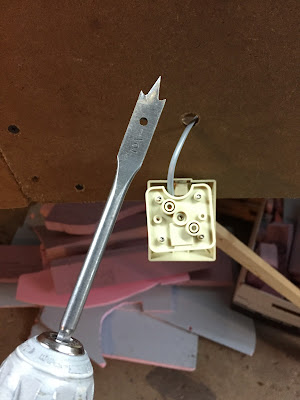 I started with the "dead end" plug-in at the east end staging yard. This location is the farthest away from the wireless antenna and coverage is spotty. Worse, if you plug in at the east end of Old Saybrook, you have to streeeeetch your cord a ways to get to the staging turnouts. So, I just extended the cab bus by creating another cord with a plug at one end and stripped the wires at the other end. The good news is that you can use this box at end-of-run and is under $2 (versus $15 for a full UTP). The bad news is that you have to hard wire it. The wires from your cord (4 to 6 of them, depending on what type of cord you use) have to be stripped and connected to the corresponding wires in the box. But it's not too difficult if you take your time, and it saves you some money. 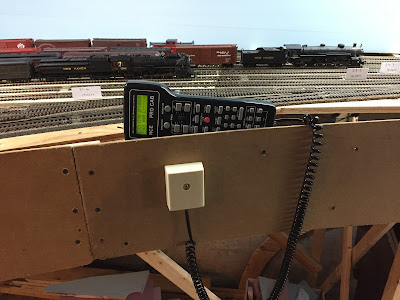 As you can see in the pic above, it makes for a nice, easy, cheap install. Just remember it's only for end-of-run -- you can't daisy chain these as easily as you can UTPs.

The remaining panels were the typical UTP install. Step 1 - mark where you want the UTP to go... 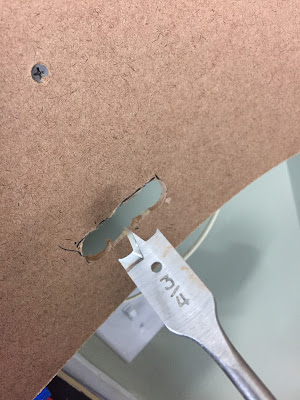 Then cut the opening for the PCB to go through (a spade bit in a drill makes this quick work). 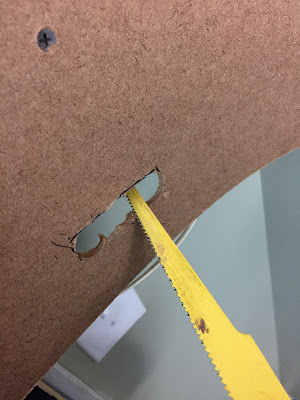 Smooth out the opening with a saw (necessary if you used a spade bit, since it makes circles). 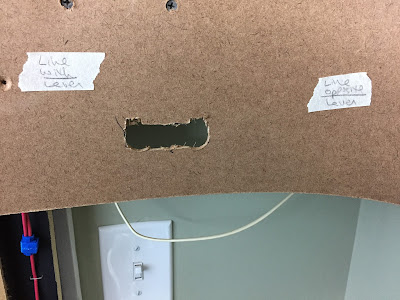 Here's the hole, ready for installation. NOTE: Here I'm installing a UTP in the middle of an existing run - a) because I needed a plug-in here, and b) I intend to branch off the bus here to go to the end of the West End staging yard. So, I have to cut the wire. VERY IMPORTANT: keep track of what side of the wire has the mold parting line. That will help you determine the proper orientation of the plug you crimp onto the end. As you can see above, I've put notes on tape to keep track. 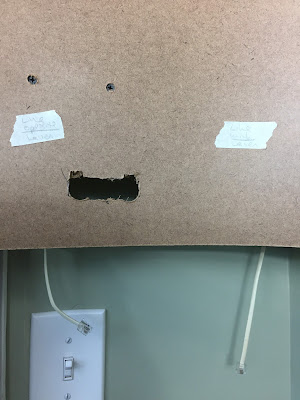 And even then, I screwed up. The "locking levers" on the plugs have to be opposite each other at each end of the cord (not on the same side, as in a phone cord). If you do it wrong, the plug-in panel won't work. Thankfully, I had enough slack to snip off the plug and re-install another plug oriented properly this time. (Proper plug position and custom cord construction is covered in the UTP instructions). 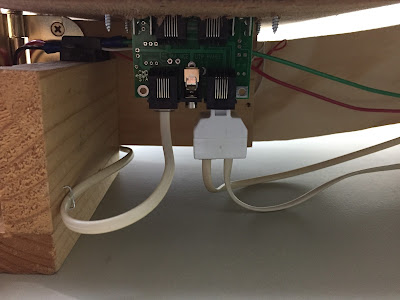 This is the underside of the UTP once installed. The cord on the left comes from the command station side and plugs into the "CMD STA" jack. The jack on the right has a standard phone splitter and cords continuing to Saybrook and East Staging (center/left cord) and branching off to dead-end at West Staging (rightmost cord). Pro Tip: I discovered that a 3-way female splitter will not work due to the way it's wired internally. So if you want to branch your cab bus, use the splitter type shown above (1 male/2 female). 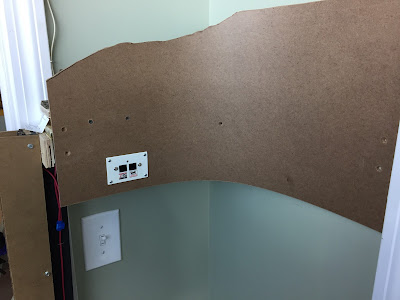 Pic above shows that UTP finished and in place at the end of the Airline and drop-bridge to Airline staging. This will also be a great place for the engineer on one of the crews operating in Saybrook to be out of the way.

With all this additional run of cab bus, I was worried that I might get some voltage drop towards the ends of the runs. Those little wires are only 26-28 gauge, so they're not very robust. Consequently, the UTP instructions suggest that you add additional power to the cab bus every 40 feet. Fortunately, it turns out this is easy to do. 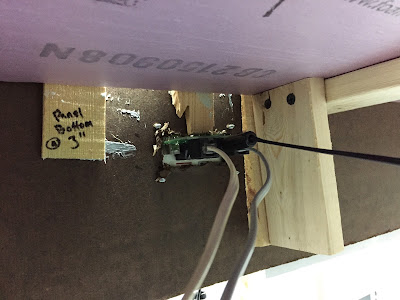 The UTP has a power jack at the back of the PCB and you simply plug a power supply into that jack. Pro Tip: Some UTP instructions (notably, the ones provided by Tony's Trains) can be a bit confusing, saying you have to cut PCB traces and solder jumper wires and install resistors to power the cab bus. Not so! You just have to get the proper power supply (as indicated in the instructions) and plug it in. I'm still not quite sure what all those other instructions are for, but I confirmed with Tony's that - yes, indeed - you just plug it in. See above. 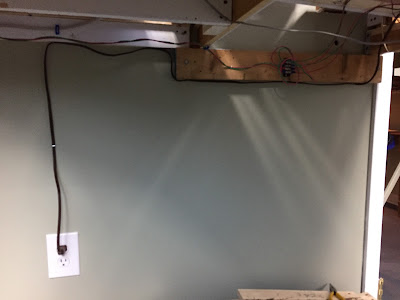 The only problem was that the UTP that was where I needed it to be (around 35') was nowhere near an outlet! So I used an inexpensive extension cord to get from the outlet (above) . . . 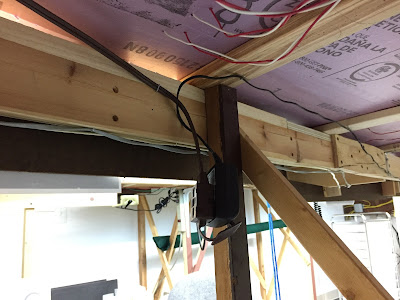 . . .to the "wall wart" (power supply plug - above). The only downside to all this is that I have to remember to plug-in/unplug the power supply from the wall for each operating session. 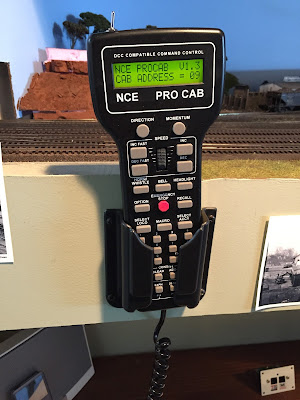 In addition to the "end-of-run" plug-in at East Staging, I did another end-of-run at the end of West Staging. See below... 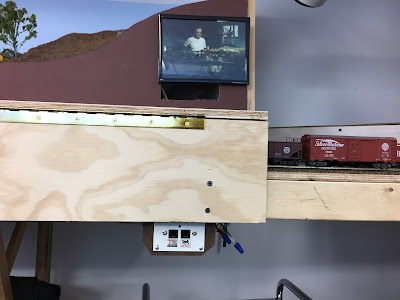 This is the end of the branch off the cab bus I mentioned earlier. Although I could have used another inexpensive phone jack as I had for East Staging, I decided to use the full panel here so that both Airline and staging crews could use the same panel if needed. 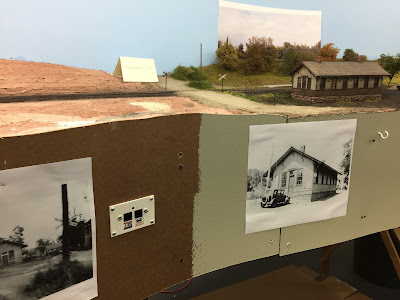 Finally, I also cut into the main cab bus at Rocky Hill and installed a very much needed panel there as well. The Valley Local crews have been stretching the cord to this location all the way from the Middletown panel. Certainly not ideal. Now there's a dedicated panel right where they need it.

Despite all these new panels, I'm still committed to wireless operation. There's a lot less hassle/tangle and you can focus on your engine rather than on the location of the next panel. But if you lose your signal or the batteries go low, it's nice to know you can always go back to the old-fashioned tether.
Posted by Chris Adams at 7:16 PM