Haven't been able to do much with the layout lately due to work (both office and yard), but I took advantage of a stormy Saturday afternoon to make some changes requested by some of my operators (well, mainly Tom, but I'm sure he speaks for a future many).

One of the recurring problems he was having in the Cedar Hill (West End) staging yard is that cars would occasionally, randomly derail as trains were leaving. Knowing how experienced an operator Tom is, I knew it had to have something to do with the track, but I just couldn't figure it out. Until it happened to me - then I realized that the center-over spring in the Micro-Engineering turnout right at the throat of the yard was a little too sensitive in one direction. That is to say, the points would lock in both directions, but sometimes as cars were rolling over the points, the points would snap back in the other direction.

I tried different ways to adjust the tension, but nothing worked as reliably as I wanted. And being installed right at the yard throat, I didn't want to rip everything out and replace the turnout (especially since it was fine in all other respects). The solution turned out to be surprisingly simple: 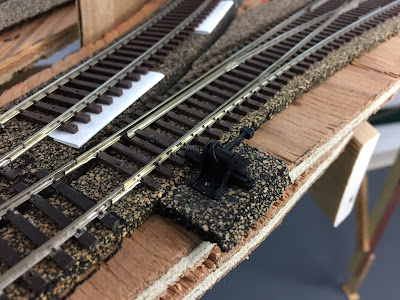 Just needed to widen the hole in the throwbar to .052" to accommodate the pin on a Caboose Industries ground throw. Problem solved.

I'd also received some complaints concerns with the fascia in this area being a bit too high - it was obstructing the view of the cars' wheels and preventing a good roll-by inspection of departing trains. Even more importantly, the 33-train schedule I run (using so few staging tracks) requires a lot of swapping of equipment - and I too discovered how difficult it is to rail a car or locomotive when you can't see where the wheels contact the rails. 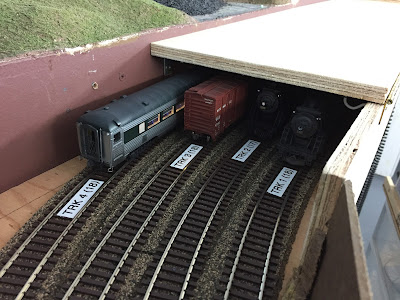 Unfortunately, I don't have a good "before" photo, so the above will have to suffice. As you see, I'd already cut back the staging lid last month, but you can see where the masonite fascia meets the plywood sidewall there, which resulted in a 3" high wall/obstruction along the front track. 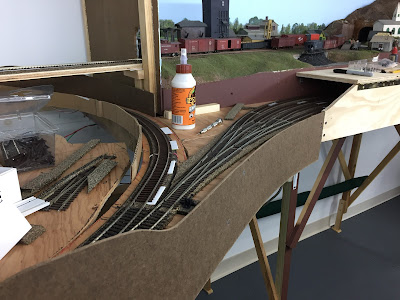 So, out came the saber saw and down came the wall - well, cut down anyway (you can see the original height on the left end). There's still enough of a "lip" on the fascia to keep anything from falling to the floor, but now you can easily see to (re)rail equipment in this area. Hopefully, Tom will agree :^) 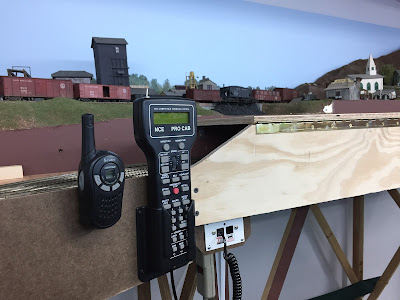 I also took his suggestion to move the UTP (Universal Throttle Panel, a.k.a. cab bus plug-in) from the far-right end of the yard to the throat where the staging operator spends most of his time. No more unnecessary cord stretching. Note also the handy-dandy throttle holster and radio for the operator here.

Moving that UTP started me rethinking some of the locations of my other panels. Now that I have a bunch of ops sessions under my belt, more-convenient UTP locations have become apparent. Thus.... 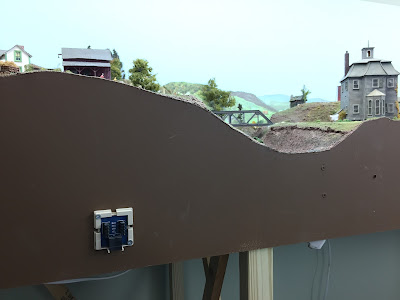 I'm installing one at the left end of the Mill Hollow module (on the Air Line) and at the end of a long aisle. This is an "end-of-run"/branch of the cab bus, so I can get by with an inexpensive phone jack here. 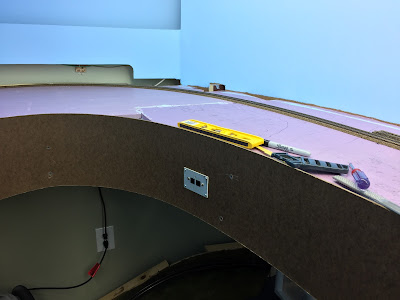 Eventually, I plan to branch the cab bus again to go to an NCE fast clock repeater at the Agent/Operator's desk. With the Shore Line ops becoming more prominent, knowing the precise time that the staging guys are seeing on their throttles becomes even more critical. So I installed another UTP at Deep River where the cab bus branch will begin and make its way to the desk.

Not bad for an afternoon's work. Now I just have to wait for the final UTP to be delivered and wire up the remaining jacks, and I think the cab bus will finally be really and truly done. I've certainly come a long way from being totally wireless (for good reason). While wireless is still my preferred ops method (no tethers to get in the way!), it sure is nice having some extra throttle security. Even better, the bus lets me rely on NCE's built-in fast clock - a feature which, as I mentioned earlier, has become critical with the Shore Line ops.

Speaking of ops, I can't wait for this busy time at work to be over so I can get back to regular, monthly ops sessions. I've made a few important physical improvements since the last session, and have really dialed-in the schedule through Saybrook, so I'm eager to see how everything works out - and what new punch list items Tom and the rest of the gang will come up with!
Posted by Chris Adams at 8:03 PM