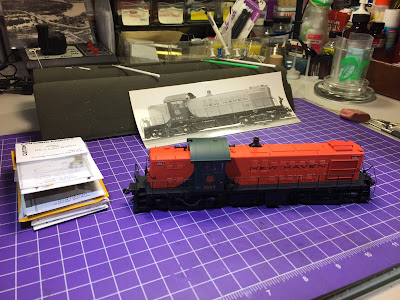 While the Valley Line is firmly planted in the steam era (Autumn, 1947), I experienced a pretty severe case of era creep when Atlas came out with their Loksound-equipped Alco RS-1 in the New Haven's beautiful delivery scheme. The prototype was delivered in the spring of 1948, so I could use one in the Autumn of that year. And once I discovered that the #0669 - the one Atlas produced - was actually used on one of the Shore Line locals, well that cinched it. I had to get one.

Ever since I "New Havenized" my DERS-2b (Proto 1000 RS-2), I'd been looking forward to giving the 0669 the treatment. I finally got started last October, but between the holidays, ops sessions, and busy time at work, I wasn't able to do much more with it.

Until this weekend, when I finally doubled-down and decided to finish it - and did!

Last time, I'd only gotten as far as drilling the cab roof and installing the brass tube for the steam generator exhaust stack. So I continued by installing the hand brake chain and guides. 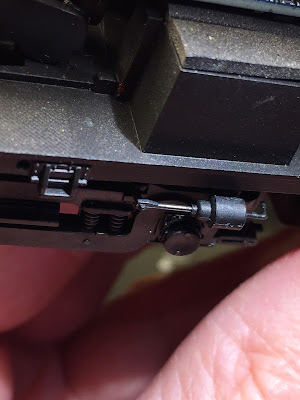 The chain has to attach to the brake valve pistons somehow, but you try to drill a hole through that little nub (the end of the brake lever sticking through the "clevis" at the end of the piston). I opted to just file that off to provide a flat area for drilling a #80 hole. 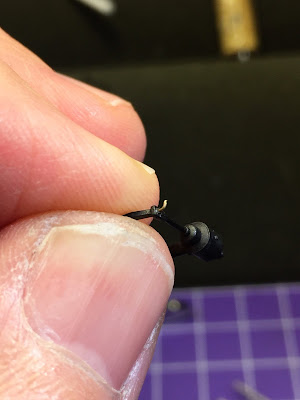 I then inserted a piece of .0125" wire, bent up into a hook at the end that I could use to hang the chain on. 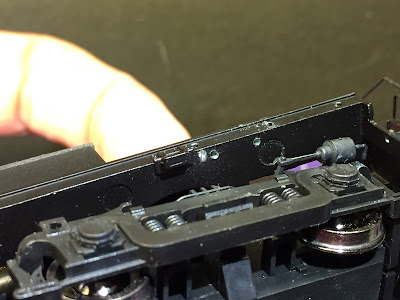 Next, I drilled the mounting holes for the chain guides. Prototype photos are absolutely critical for determining location. As you can see, I had one false start. It's not easy drilling such small holes into the metal frame, but I made a dimple with a safety pin, lubricated the bit with bar soap and used my foot pedal/flex shaft Dremel combo to regulate the speed, backing out often to clear the metal shavings. Didn't break a single bit! 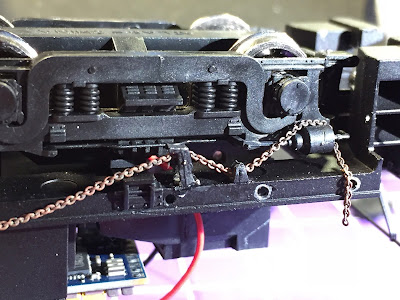 I threaded the chain through the guides before gluing the guides in place. Much easier than trying to thread them afterwards (ask me how I know!). Be sure to ream out the holes in the guides so that the chain goes through easily. I then glued them using gap-filling CA and - once in final position - I touched them with CA accelerant. That creates an instant, and secure, bond. I love this combo for just about all my non-styrene gluing. Click here for more about it. 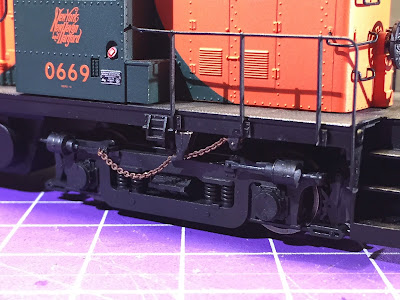 I glued the rear end of the chain to the small guide, trimmed the chain to length (determined by swiveling the truck to its extreme), and hooked it on the little hook I'd installed on the end of the brake piston. It was SO fussy trying to do that that I decided to go ahead and glue that end of the chain as well so it wouldn't ever fall off. The photo above shows the final result. 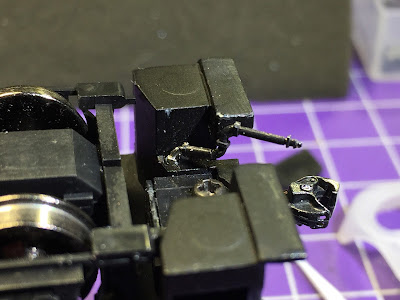 Next, I drilled mounting holes for the BARCO steam heat pipes and glued them in place, using my favorite CA/kicker combo. 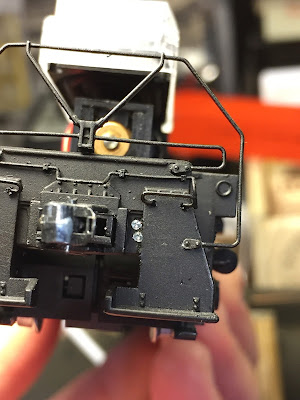 The Atlas model comes with LOTS of detail already in place (unlike the Proto1000 RS-2, which had almost no detail at all - not even grab irons!) , including a brake hose. But that brake hose didn't look that great (no valve), and I needed a signal hose as well, so I figured I'd next drill a couple mounting holes and glue nicer-looking ones in place. 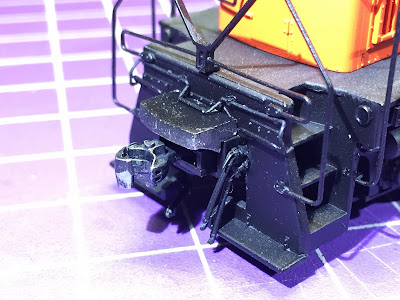 The easiest detail to prepare (only needed painting) but the hardest to install (since there were no mounting lugs) was the diaphram buffer. I used contact cement to mount it - and hope it holds. 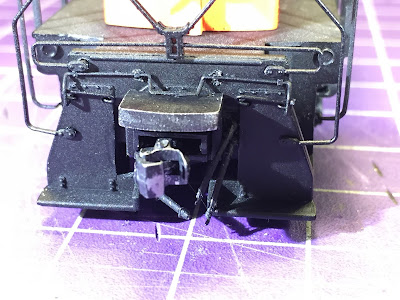 And in this - and the next - photo, you can see the completed end details 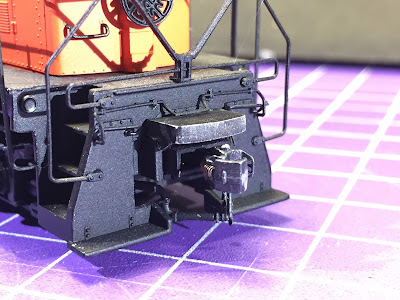 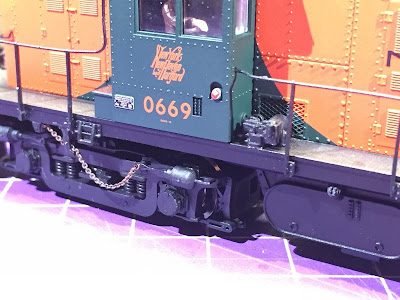 Like on the RS-2, the RS-1 has a brake equalization valve on the running board, but it's in a different location - in front of the engineer instead of behind the fireman. 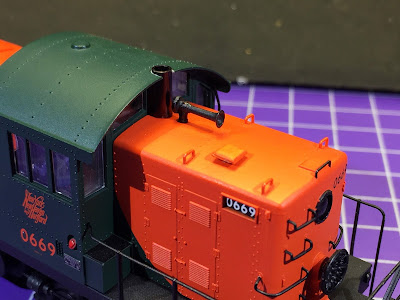 Once the frame/end details were curing, I turned my attention back to the hoods. As I mentioned, I'd already installed the steam heat exhaust stack (including drilling a precise hole through the cab roof - free hand), so I next installed the rear horn and intake stack (aka "mushroom" vent). Full Disclosure: while I could find no blueprints/dimensions for this detail, I think it's on the small side. But it's still not as small as the part that Custom Finishing recommends. It'll do for now - at least until I wanna bother scratchbuilding one. Still looks pretty good. 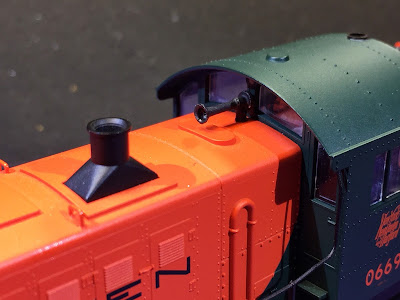 And here's the front horn. The Atlas model has the horn coming out of the front of the cab. Not cool (or correct), so you have to fill that hole and drill a new one. But the result is worth the effort.

Once that was done, so was I. All that was left was to take a couple of "builders photos" 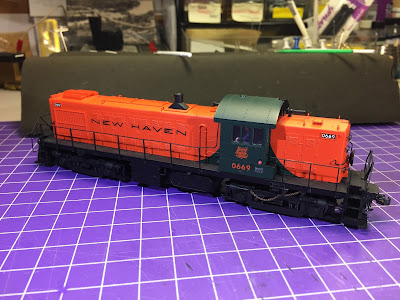 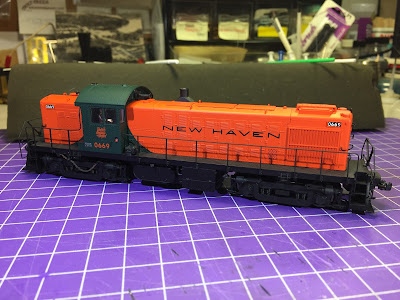 Since the #0669 has been in the shop since last fall, and missed a bunch of ops sessions, I'm psyched to get it back into service. I didn't go quite as all-out on this engine as I did on the RS-2 (I skipped the marker lights, the MU hoses, and the speed recorder). And, unlike the RS-2 model which is close to accurate for the New Haven units, the RS-1 model needs a bunch of changes to be perfectly accurate, which I didn't bother with:


So yeah, I didn't bother making those changes (though I did purchase an extra hood and cab for a possible future project...)

But all in all, despite these minor (to me) compromises, I'm very happy with how the 0669 turned out - and am especially happy it's finally done.  All I have left to do is some minor touch-up and weathering.

And then I can get back to working on the signature locomotive of the Air Line Local (and star of the blog banner above): J-1 class mikado #3022!