While making repairs on my bad order (BO) cars earlier this evening, I was confronted with having to (try and) reattach a stirrup step on the side of a reefer.  That's a pretty delicate job, especially considering they're styrene (or maybe even engineering plastic) with a very tiny surface area for gluing.

Most folks would probably just drill a couple holes and replace the stirrup with wire, and I would have done that had I lost it (which would have been very easy to do).  But since I had it on-hand, I figured I'd try and use it.

But how do you glue it and expect it to hold? 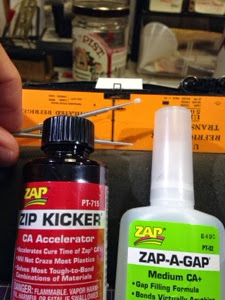 For a while now, I've been using a method I use for attaching delicate parts on resin kits.  I use a medium viscosity CA, liquid Zip Kicker, a micro-brush, and another old micro-brush that's had the brush removed and the point split.  See above (I put a white piece of plastic behind the stirrup so it'd show up in the pic). Here's how I do it:
This will make an instant, and surprisingly strong, bond.

I've used this method for stirrup steps, airhoses, just about anything where you need it to set up instantly and strongly.  The only downside is that the bond may be a bit brittle - there's not much give, and if I were to bang the stirrup step now and it were to break, it'd probably fly off where I couldn't find it. Thankfully, I think I'd have to bang it pretty hard - which (hopefully) isn't likely.

Then and only then would I bother replacing it with wire.  In the meantime, I'll use this method whenever I have a chance of salvaging the original part.
Posted by Chris Adams at 6:21 PM