Now that I'm working in this area again and giving it more attention, I decided - since the "Berlin Main," though cut back, is/was still "main track" - it should be elevated, and the industrial siding ramp down from there to ground level. Of course, that would require lowering the plywood base in the area (right/north of the bridge) in order to allow for the height of the cork roadbed while keeping the track level.

I'm glad I used L-girder benchwork. It really makes it easy to make changes in elevation and well as width. How easy? Well, let's just say that as I was going through old posts to find benchwork links, I found a post where I reworked East Berlin's benchwork already once before! It was so easy, I apparently forgot all about it.... 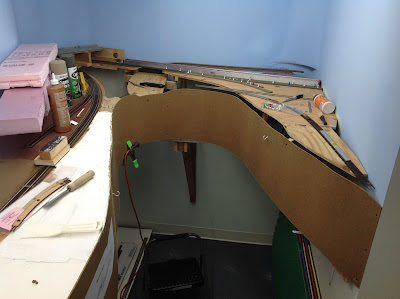 Then I glued down the new cork roadbed, holding it in place with pushpins (see photo above, click to "embiggen").

All that took only a little over 2 hours - and I made another little bit of progress. I don't even want to think of what would have been involved if I had wanted to try and do this having used something other than L-girder benchwork. There must be other reasons it's such a tried-and-true construction method for model railroads, but my experience (or, rather, "experiences" considering how much I rebuild, apparently) has certainly convinced me it's a great way to go for a larger layout.

* a variation on a favorite phrase of a couple of friends who shall remain nameless, when giving a certain somebody layout advice... as in: "All you have to do is _____"  :^)
Posted by Chris Adams at 8:00 PM