I've been avoiding running trains on the Shore Line for a while since my I-5 steamer was pretty persistently derailing around the west end loop. The front drivers would just walk up the outside rail and jump the track. This despite the fact that I have relaid the track here not once, but twice. Most equipment runs ok through here - and I suspected (especially after BillS suggested it) that the loco's drivers might be out of gauge. That would be a major pain.

But before even checking that, I decided to do something much more basic - and necessary. I got out my handy dandy NMRA track gauge and checked the track. I figured if the drivers were the problem, the engine would derail elsewhere and not just in this one spot. Yup - as you may have guessed already, the gauge on about 12" of track on the curve was a bit tight.

Now, this is Atlas flextrack - chosen 1) because it's much easier to curve than Micro-Engineering track, and 2) it was going to be hidden anyway. But herein lies a problem: the same thing that makes it so easy to curve (i.e. the "floating" rail) also causes it to go out of gauge ever so slightly on a curve.

Apparently, that rail can move so easily because there's just enough slop for it to - and enough side-to-side play to cause gauge problems with equipment that's especially finicky.

So, what to do? I'd considered ripping out the track a third time and replacing it with M-E track. But I came up with a much better and simpler solution - more spikes! 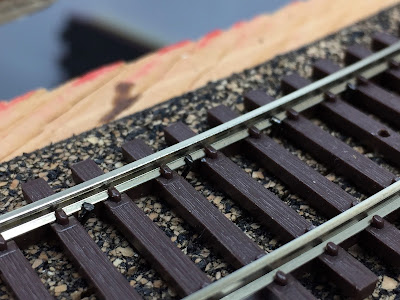 Yup - all I did was use spikes to push the rail back from the track centerline. I had to go every couple of ties (where there's no tie web) since I had to go in at an angle. Pro Tip: Use Walthers #948-360 or some other longer type spike. You need to be able to go through the cork roadbed and into the plywood subroadbed, at an angle.

Now the I-5 runs through there like a champ!

While I fixed the flex, I still needed to salvage a switch. While I had my NMRA gauge out, I checked the flangeways and discovered why some engines (steamers again) would sometimes "hop" through the frog. Turns out, one of the guardrails wasn't quite doing its job of keeping the drivers pulled over away from the frog.

Fortunately, this was an easy fix: 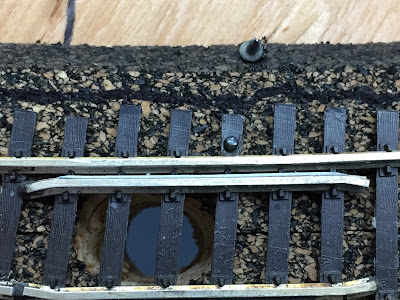 Not the best photo, but hopefully you can make out the white HO scale 1"x6" - a strip of styrene .011" thick, ACC'd to the side of the guardrail and filed to fit. This eliminated the slop/sideplay that was causing the drivers to want to pick the frog.

I knew about these two issues and was glad to finally be rid of them - but the Model Railroad Gods weren't done with me yet. When I went to pull my test train back onto the mainline, I flipped the toggle to line the switch, and - nothing. One of the toggles on my control board decided this would be a great time to stop working. And if the toggle don't work, the switch machine don't work (cuz it gots no power).

So, I plugged in my soldering iron and opened the panel: 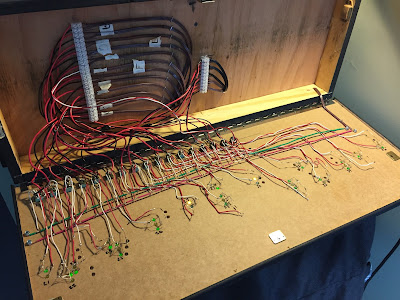 While this looks complicated, well - it IS a bit. But essentially it's one circuit done over and over and over again. LOTS of solder connections and I discovered the problem was that one of those connections was making just intermittent contact. Dunno why. But once I figured that out, I just resoldered the connection and was back in business.

So all in all, not much "progress" to show for all the time I spent on the layout today - but quite a bit accomplished. I suspect this is probably pretty standard fare for such a large layout, but thankfully I have good friends to help me with the fun parts (scenery, structures, etc) while I take care of the less fun parts that keep this project moving forward.
Posted by Chris Adams at 6:05 PM