After concentrating so much on ops sessions (both prep as well as fixing punch list items between sessions) and the structures/scenery for Old Saybrook (though, admittedly, mostly a support role to BillS), I'm psyched to get back to a bit of actual modeling. As in, at the workbench. 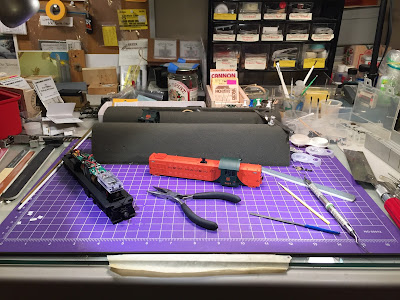 Ah! the wonderfulness of old radio shows/music playing, a fire in the RR stove, and burning your fingers on a brass tube you're grinding down (shoulda remembered to hold it with a pair of pliers). Those are among the true joys of modeling for me. And anybody that's followed this blog for a bit know that my favorite modeling revolves around rolling stock (see what I did there?). Building resin freight cars and detailing locomotives based on a specific prototype are what I most enjoy doing. Just witness my DERS-2b project as proof.

So next up in the "shop" is DERS-1b #0669 - which was responsible for my "era creep" many months ago. As you can see above, I've already dismantled it. Fortunately, unlike the Proto1000 RS-2, this Atlas model already has lift rings, stand-alone grabs and fine pilot detail. But in order to make it a New Haven DERS-1b, I need to add the following details:


I made an executive decision not to add marker lamps & MU stands as I had on the DERS-2b. Just way too much trouble for what they add. I may scratchbuild & add MU details at some point in the future, but once I discovered that the Custom Finishing part wouldn't fit as it had on the RS-2, that ended that.

So, first up - and the biggest visual bang for the time spent - are steam generator details on the short hood. And the first of those is the most intimidating - but might as well jump right in the deep end and start drilling a LARGE hole in the top of the (factory painted) cab... 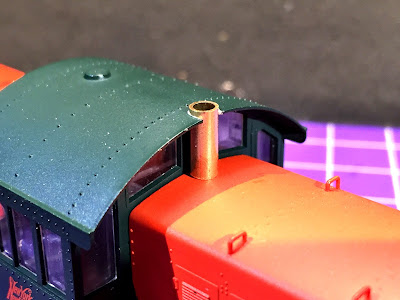 Friend JohnK suggested that I simulate the exhaust stack going through the cab roof by fitting a 1/8" styrene tube between the hood and the roof and then adding a "washer" of material on top of the roof. That would avoid such delicate drilling.

But I'm stubborn - sometimes in a bad way - and doubted that that would look right. So I started drilling with a #60 drill, centered between the end of the cab and the edge of the roof, and gradually increased the drill diameter until I got to a 1/8" drill bit. Heh - it was that last little bit that finally broke through the roof edge that I had hoped to preserve. But to my eye, I think it looks fine - and certainly shows that the stack is all one piece.

Oh, and I decided to use brass tube rather than styrene so that the stack edge(?) would be thinner (and the opening/inner diameter larger). It looks much closer to the prototype - again, to my eye anyway. 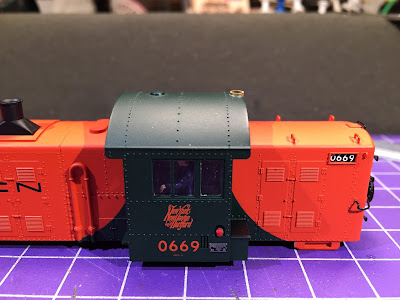 The biggest challenge so far (other than drilling such a precise hole) has been to get the right length. The stack has to barely protrude above the top of the roof. I'm using the cab vent height as a guide. 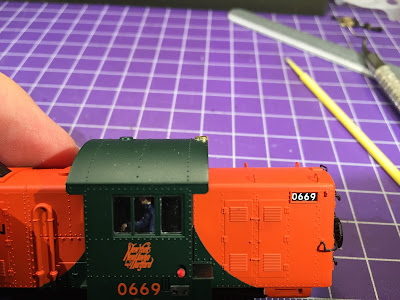 You may have to click for a larger image (you can always click on an image to make it larger), but you can see here that I'm pretty close. Just a bit more filing to do. 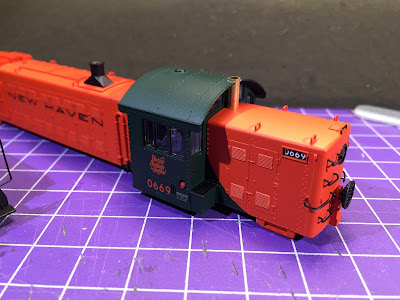 It's amazing how the addition of one little(ish) detail can really start to change the look of a stock model and make it start to look like the prototype. Just have to paint the tube - then I think it'll look just right (despite having broken through the edge of the roof).

Since the Atlas model came with so many details already done, I hope the DERS-1b doesn't take as long as the DERS-2b. I may not have it ready in time for the next operating session, but I'm certainly going to try. I hope you'll enjoy following along - and please chime in with any tips or suggestions you have, especially if you've detailed one of these models before!
Posted by Chris Adams at 6:42 PM