I haven't done much with the liftout "north" of the Saybrook wye since last August (except for one little "Stolen Hour" last November), but with the push north to Essex imminent - and bridging this gap critical to continuing track northward - I really needed to finally get'er done.

So, in my now-typical fashion, I put in the liftout, clamped it down, and laid track right across the gaps - nailing and gluing to keep the track secure once it's cut.

But how to cut it? I have a couple of choices, both made by Dremel. 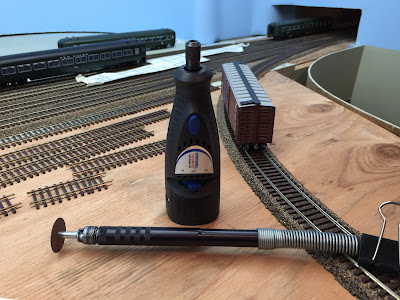 One is their 4.8v MiniMite cordless mototool. I used that to cut the rails on the dropdown, but it got really slow as it ran out of juice (and it tends to run out of juice pretty quickly these days). It does have the benefit of being at-hand and there's no cord getting in your way.

The other tool is a FlexShaft attachment connected to a full-feature corded moto-tool, with a foot pedal speed adjustment.

They both use the abrasive cut-off wheel attachment. 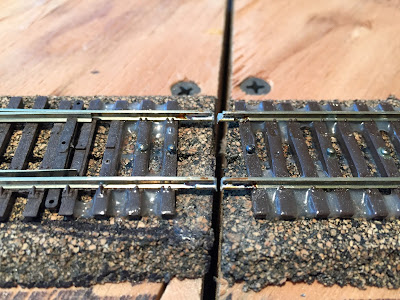 I'd had to lay the turnout at the north end of the wye right up to the edge of the benchwork. So I thought it best to add rail joiners, solder the joint for stability (in addition to the nails and glue you see here), and then cut the rails (and, incidentally in this case, the joiners/solder too). I used the MiniMite for this job and it did ok. But I wasn't happy with how much of the solder it ground away and how wide a gap it made - due primarily to the fact it was so slow and I had to Wait SO Long for it to cut through. You can try your best to hold it perfectly still as you cut down, but having to wait so long, you're still apt to let the disk drift. And as you do, you remove more material side-to-side.
It did an adequate job though - but I may try to fill in that gap a bit later.

Also, even though the MiniMite is relatively small, it still doesn't let you hold the cutoff disk perpendicular to the rails for the smallest cut. 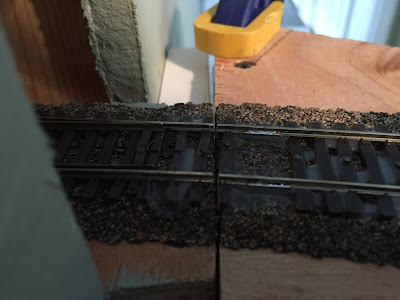 I made the second pair of cuts using the flex shaft - and you can (hopefully) see how much better a job it did. Not only was it fast (and safe given the speed control using the foot pedal), but I could put the shaft parallel to the rails and the cutoff wheel perpendicular to the rails. This all resulted in a much better cut.

The only downside to using this set-up was having to disconnect everything from where it was at my bench upstairs. But, even then, it took me only a few minutes. Not as convenient as having the MiniMite at-hand, but I did a much better job as a result.

So the lift out between the Saybrook Wye and Essex is finally finished and track laying can continue to Essex - just in time for what I hope to be my first operating session in over a year on Feb. 19th!
Posted by Chris Adams at 6:04 PM