Here's the last part of the last post I posted about my construction of the Wethersfield Lumber Co., ". . . Assembly Part 1." (Click here for the build thread up to this point): 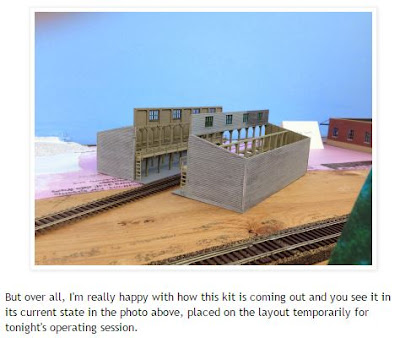 That was January 30, 2015. And it's been sitting there, just like that, while being served faithfully by the Valley Local all through my major layout expansion and up through this year. Yikes!

But now that the layout has been built out, all the track's been laid and wired and things have been operating pretty well for months now, it was time to get back to Wethersfield - which Bill and I did starting early last month and I continued early this month. But that work is all being done at the "south" end of town. At the north end, the persistently incomplete Wethersfield Lumber began to annoy. It was time to finally finish it. Well, the shed at least.... 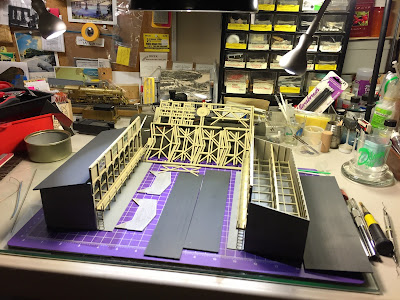 I'm actually a little embarrassed by how little there was left to do - and how long it's taken me to get around to it. Going through the previous posts, my only "reason" could have been a hang-up with what to do about weathering the roofs and (heh, now that I've remembered too late) what to do about detailing the interior (oops!). Well, I figured I could always deal with weathering the roofs "later" - I just wish I'd remembered about the interior . . . . I guess I'll get a taste of what folks who build ships in bottles feel like when I go to try to add lumber to the now-completed shed . . .

But in any event, the photo above shows all that was left to do - two end walls for the cupola, 10 roof braces, and four roof sections. 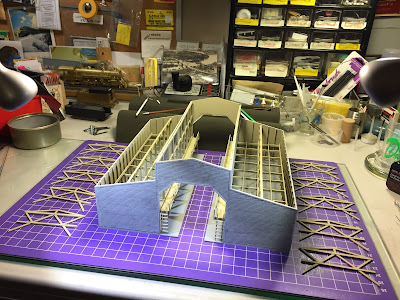 Using the marks on the blue mat, I squared up everything and glued the cupola end walls in place, being careful not to jar anything. Waiting for the glue to dry took more time than anything else - I let the walls dry & cure overnight so they'd be secure for the rest of the work. 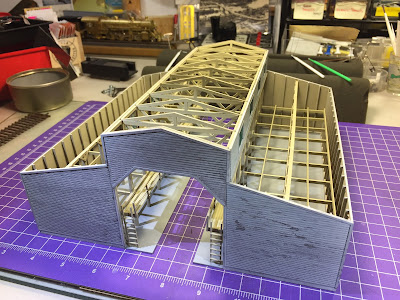 Next, I added the roof braces. They fit snugly in place, so I pressed them all in and then just added a drop of glue to the top ends where they meet the side walls - just enough to keep them secure. 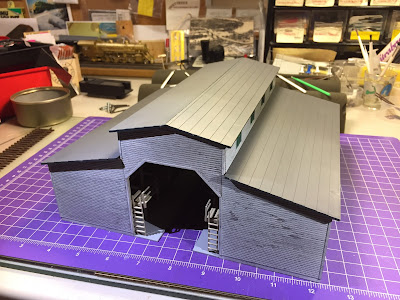 Finally, I glued the roof sections on - the only challenge being holding the cupola roof snug while the glue set up so the ridgeline seam wouldn't show too badly. As you can see, compared to how great the walls look (IMO - click here for how I got this effect), I really need to weather the roof...

And I need to add some stacks of lumber to the interior - still not sure how best to do that (and now fully remember why I'd not finished the shed before...). I'm also considering mounting it on some sort of base so that the track that goes into the building can be "recessed" somehow. Just running track in there on ties and all doesn't look right to me.

If you have any suggestions on that - or on anything else I should be doing with this project (especially anything else I may have forgotten!), I hope you'll let me know in the comments.

At least I'm getting some modeling done! (and sharp eyes will have noticed my next project on-deck: that nice Key Imports J-1 class 2-8-2 in the background, soon-to-be #3022 - power for the Air Line local!)
Posted by Chris Adams at 5:30 AM