Friday Fun - What's On My Workbench

Now that regular legislative session is over (we didn't get a state budget done in time, so we'll be going into special session next week), I have a chance to catch up on my sleep and get a few things done at the ol' workbench to clear my mind - which works best if what you're working on doesn't stress you out . . . but that's another story. 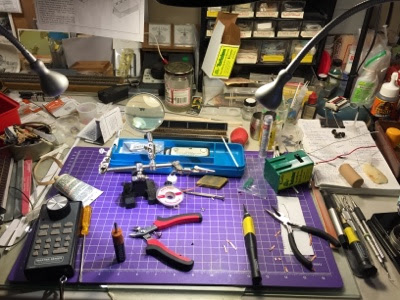 Here's what I have on the bench at the moment:


By far, the hardest part of all this was removing the antenna boss off of the PCB in the throttle. I swear, I must've had beginner's luck on my first conversion cuz this step has gotten more difficult each time I've done it. So I'm glad this is my last one to do. Let's just say I have to get a LOT better at unsoldering...

I also got the first coat of paint on the Essex/Deep River backdrop, but that's a topic for another post. Suffice it to say that I'll be really really glad when I can finish building this railroad and actually focus on operating it.

Email ThisBlogThis!Share to TwitterShare to FacebookShare to Pinterest
Labels: WOMW