When we last left the Saybrook Control Panel, everything was all wired up and working but not quite  finished. That is to say, it was all marked up and totally not intuitive. See below...

As you can see in the photo above, while everything is working, the toggles really have no obvious relation to the turnouts they're controlling. They're associated by letter, but there's no logic at all. And most of the new turnouts don't have any light indicators. Suffice it to say, using the panel during the last operating session was a bit frustrating.

So I decided to bite the bullet and make redoing the diagram and rearranging the toggles the top priority on the punch list. Fortunately, BillS could take care of the diagram - I'd have to install the new LEDs and rearrange the toggles myself though. 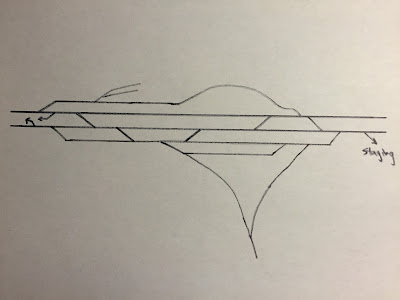 While my now "marked up" panel graphic provided a good indicator of what changes would be necessary, it was also a good idea to draw an accurate schematic of the current track arrangement and get it to Bill. Based on that - and his coming over to visit the track in person(!) - we (and by "we" I mean "he") was able to modify the diagram to reflect the new arrangement. He then sent me a full/true size PDF I could get printed. I took that to Staples and paid the extra for a good quality printer and heavier stock paper. $20 got me a nice new diagram.

But I had to remove the old diagram first.

I had used a glue stick to attach the diagram, but it wasn't too difficult to remove with a little time and patience (and a couple of putty knives)... 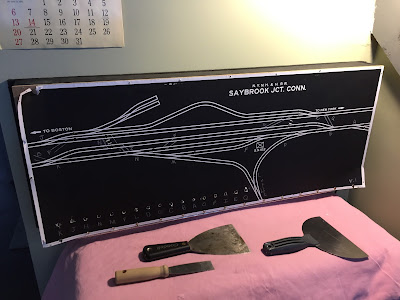 The process would have gone quicker if I wasn't trying to preserve the old diagram. But I wanted to save it for posterity (and to have a handy reference for how things "used" to be in case I need it).


Bill did an absolutely amazing job of reworking the diagram according to the new arrangement. He also used some prototype diagrams I sent him to make the new graphic as prototypical and as informative as possible. All turnouts are now numbered and - BONUS! - the numbers actually correspond to the toggles and the toggles are all in a logical order. The tracks are also numbered (from top to bottom - 10, 8, 6, 2, 1, 5, 7 - now you know why a diagram is so necessary!). The most impressive thing though was that he measured where my toggles were so that when the diagram was installed the numbers would line up under the toggles (it helped that I'd installed the toggles in a straight line and on 1" centers). He also put little dots where the LEDs should go. Made everything very nice and easy to follow.

Once the diagram was in place, I drilled 1/8" pilot holes through the front where the LEDs would go, then drilled 1/4" from the back. 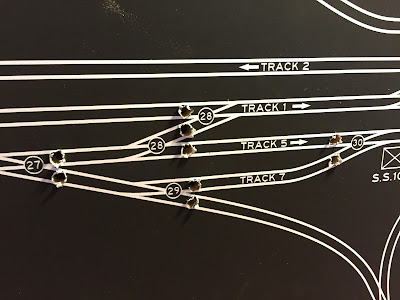 Then it was just a matter of installing the little LED "sleeves" that would dress up the edges of the holes, and press fit the bulbs in.

I used the same process with the toggles, though the holes were drilled already. So it was just a matter of punching through the paper, pulling the toggle through, and dressing it up with the washer and nut. 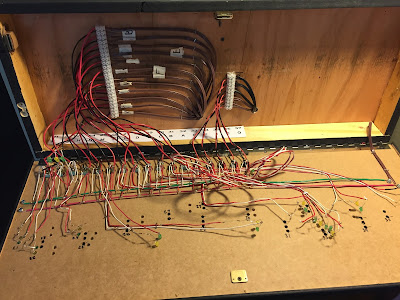 Once all that was done, I was left with the long and tedious process of moving the toggle wires to connect with the proper turnout wires. In most cases, this just involved disconnecting and reconnecting. But there were a few wires I had to lengthen, and a couple I had to replace entirely.

The more involved process was installing the new/additional LEDs and wiring those up. But again, by working slowly and methodically, the process went very smoothly. Just took time. 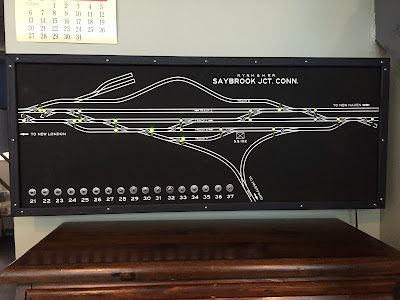 But as you can see, it was certainly worth all the effort. It's really obvious how much better this diagram is compared to the old version. It now accurately reflects the track arrangement and there are LEDs for all the turnouts, and it just looks so much better now, with the main tracks now being parallel and everything being labeled so nicely.

The lesson for me here is to not be too afraid of redoing things (within reason, of course). It usually isn't as bad as you fear or take as long as you thought (heh - sometimes it takes even longer, but that's beside the point). In the long run, you'll be much happier - at least I'm finding that I am.