Seems I ended November kinda like I started. Back on Nov. 2, I mentioned I was going to try and modify my NCE Wireless ProCab with an internal antenna (so I could finally get rid of that eye-poking long whippy antenna). Well, during the last weekend of November, I finally got enough courage to do it. Pete mentioned on the way to Jim's house how nervy it was tear open a $200 piece of electronics and monkey around with it. I thanked him for the reminder and tried to forget he'd said anything - since I was already 1/2 way through the project at that point.

Tip: if you attempt this modification, it's probably best not to think about how much your ProCab cost. The good news: if you know how to de-solder as well as solder, and have some basic skills, this is a relatively easy modification to do. Just be sure to take your time - it isn't something you want to rush through.

And now that this little project is done, I can say that the operation was successful! Here's how I did it:

I used this step-by-step description as my guide:

I also wanted to add a switch to allow me to turn off the battery pack. I don't know if it's a general problem with these throttles, but it seems to me that batteries left inside will discharge pretty quickly if left sitting - even with the throttle/DCC system turned off. For the longest time, I've just removed the batteries at the end of each ops session - but that's become a pain. So I figured, while I was inside anyway, "in for a penny in for a pound." Might as well add a switch as well.

Pretty straightforward - unscrew the 9 screws on the back, separate the front & back of the housing, and carefully disconnect the wireless PCB (which is attached to the back half) from the main PCB (which is attached to the front half). It's a long multi-wire plug (ribbon connector). Use a small screwdriver to gently pry it side-to-side, if needed (you don't want to pull the wires out of the plug). Set the front half of the housing aside in a safe place.

Removing the radio PCB was actually pretty difficult. It's attached with two layers of double-sided foam tape. And has been that way since at least 2003(!). After trying to pry it off, and failing, I used a hair dryer to warm the back of the housing (you don't want to risk heating the PCB's solder joints too much, so don't blow directly on the PCB). Alternating between applying warmth and gently prying, I eventually ended up with this:

I scraped off the tape and cleaned up where it had been. The "antenna boss" is that threaded part next to my finger in the photo above. Remember you can always click the images for a larger view.

Now, I don't have any pics to show how I removed the antenna boss - I was too focused on doing it without making any mistakes. There are 3 points at which the boss is soldered to the PCB. The trick is to heat all three points up at the same time so you can (again, gently) pry the boss off the board. Having a third hand helps hold things while you work on them. I place a folded-up piece of paper in the jaws of the alligator clip to protect the PCB while it's being held and I used a pair of needlenose pliers to grab the boss and remove it as soon as the soldering iron heated the solder enough to loosen it.

Step 3 - Clean up the excess solder

I used solder removal wick to clean up the solder from the three soldering pads on the PCB where the antenna boss had been. I readily admit my success with this wick is pretty inconsistent. I'd love to hear any trick/tips for working with it.

I used 18ga stranded wire reasoning that the extra thickness and the extra "surface area" of the strands would give me my best shot at radio connectivity. Plus, it'll be easier to thread through holes later (see step 8).

After I stripped one end of the wire, I twisted the strands tight and tinned them with some solder.

At this point, your PCB should look like the photo above. Note the new white wire soldered to the middle soldering pad where the antenna boss used to be.

Next, I thought this would be a good time to add the switch, so I diverged from the step-by-step instructions at this point.

I used the smallest SPST toggle (single pole single throw - just a regular ol' switch) I could find at Radio Shack (part# 275-0645) to interrupt the circuit between the battery pack and the PCB. I soldered a piece of scrap red wire (20ga solid) to the center terminal of the switch and soldered the other end to the end of the red wire coming from the battery pack (remembering to put on some shrink tubing before making the connection). I then drilled a 7/36" hole through the top of the housing and secured the switch. The photo below shows the result at this point . . . 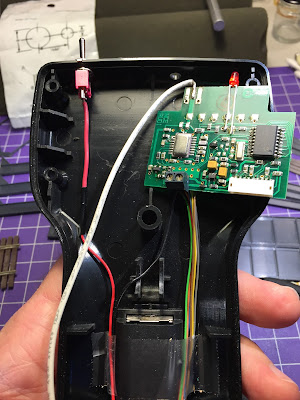 Next, I cut two new pieces of double-sided foam tape and applied them to the back of the PCB so I could secure the PCB back in place... 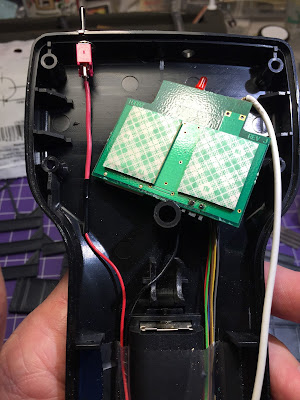 then I soldered another scrap piece of red wire to the other switch terminal, as below: 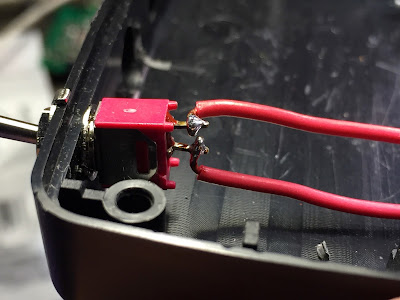 With the switch installed, it was time to finish up the antenna mod.

I think I used a 3/36" drill, but just use a drill bit that will be just slightly larger than the diameter of the wire you're using.

Pretty self-explanatory, but at this point you'll discover the virtue of using stranded wire. It threads through those holes much more easily.

Before we "button up the cab" though, let's see where we are at this point: 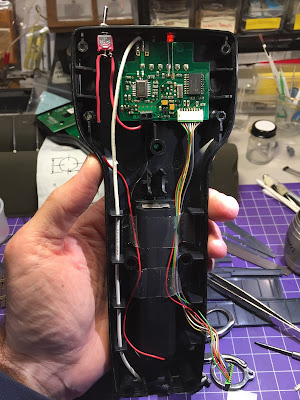 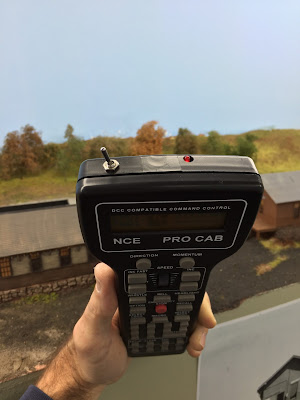 And here's the throttle in service on the layout. To switch the wireless (batteries) "ON," I have to flip the toggle to the left, as above. Also note the small square of electrical tape covering the old antenna boss hole. 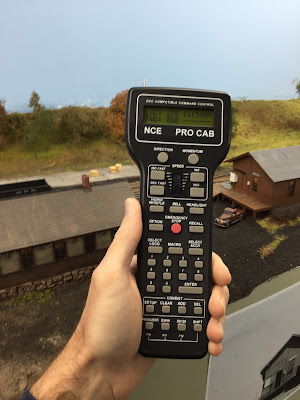 I'm pretty happy with how this turned out. I'll still be curious as to how long the batteries will last, but I totally expect their lives to be much longer now that I can switch them off. And - best of all - I no longer have to contend with that whippy antenna (and risk poking somebody's eye out).

If you're like me and have one of the older NCE wireless throttles and you want to get rid of the antenna, I hope you'll give this modification a try. Using the step-by-step instructions provided by the ncedcczendesk along with my photos & notes, you shouldn't have any problems. If you do try this modification, be sure to let me know how it's working for you!
Posted by Chris Adams at 12:30 AM