Well, I've finally converted the 3rd - and last - of my throttles from whippy antenna to internal antenna/wire. For a detailed step-by-step of how I did this on my NCE ProCab (heh - my first attempt. #nervy), click here. I generally followed those same steps to modify my utility throttles (NCE Cab04pr), but I found these conversions a bit more difficult a) because everything's so much more cramped, and 2) I've actually gotten worse at desoldering (I had a devil of a time removing that last antenna boss). 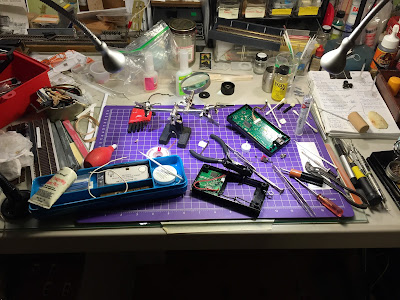 LOVE workbench photos - they're so motivating. Especially when they're of YOUR workbench! The shot above is how things generally look during one of these mods: Cab opened up, soldering stuff at the ready, assorted parts standing by. . .

In case you haven't yet clicked on the detailed instructions, here's - briefly - what I did:


The above pic shows everything done. Click on it for a larger image. Note: 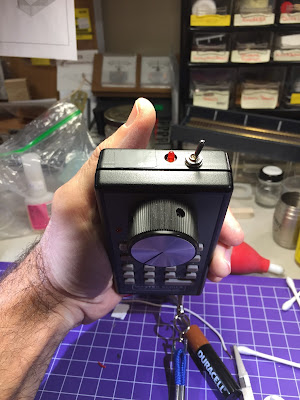 Final step: add a piece of black electrical tape to cover the hole where your whippy/eye-poking antenna used to be :^)


And here's what it looks like when it's all done. MUCH nicer without that long, unwieldy antenna, dontcha think?