Tuesday Tip - Recessing a Wire with a Dremel

During my recent construction push, I decided to swap out one of my MicroMark switch machines for a Tortoise. I needed the MicroMarkMachine somewhere else, and I had the Tortoise on-hand.

There was only one problem: There was a feeder wire coming down Right Where the Tortoise machine would have to be located. The machine couldn't be turned 180 since there's a joist in the way; and the feeder wire couldn't be moved since it powers a 2" section of rail between a frog and an insulated joiner.

If I had it to do all over again, I'd have extended the rail up to the frog rather than have to power that short bit. But since I didn't feel like ripping out and replacing track, I decided on an alternative - I'd use my handy-dandy Dremel with a router attachment (which I hardly ever use - until now) . . . 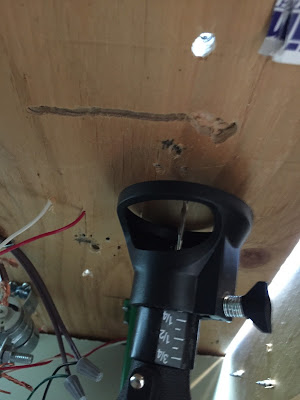 Once I decided on this course of action, I got into it pretty quickly - so quickly, in fact, that I forgot to take a pic showing where the wire came down. But it came down where you see the LARGE routed-out section there on the right. And you can see daylight through the hole where the machine's throw rod will go.

It was just a matter of routing out a channel to recess the wire so the Tortoise could mount on top of it. Be VERY careful! My particular Dremel only has two speeds - fast and wicked fast - and you want to go as slow as possible, hang on tight, and control it as best you can. 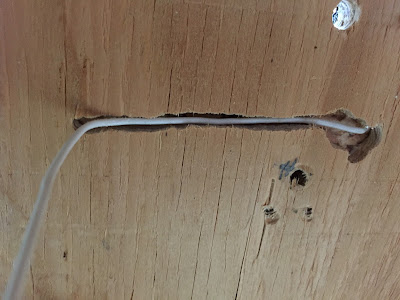 I started with the feeder hole and went left. As you can see, I didn't control it very well at first. That thing cuts pretty fast! 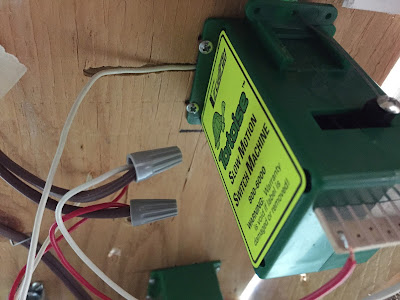 But the result was worth it - a nice recessed feeder wire and a machine that mounts nice, firm, and evenly on the plywood.

Next time though, I'll plan (further) ahead and just eliminate having to power such a short section of rail . . .
Posted by Chris Adams at 3:30 AM