Sometimes, it seems no matter how long I work on this layout, the construction phase will never be over. It's not that I don't like construction - heh, I've done so much of it for so long that I've actually gotten pretty good at it - but I'm looking forward to it being Really Done so I can focus my time and effort on other things, you know, like modeling and operating.

Case in point: Building Backdrops. I've already done a lot of backdrops (and you can see all of my trials, tribuations, and tips here), but now that the past year's expansion has gone through East Haddam down to Essex, it's time to do another backdrop.

So without too much ado (since I go into much more detail in my previous backdrop posts), I'll just give you a little annotated slide show of the recent effort. . . 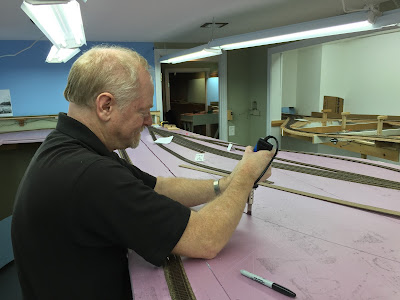 As you may have noticed, unlike the rest of the railroad - with its traditional L-girder/riser construction - the Shailerville/East Haddam to Essex portion of the layout is built on foamboard (read about my "foam foibles" here). Bill promised foamboard construction would get me up-and-running much more quickly - and he's right.

But it continues to dawn on me slowly that there are some downsides - like having to retrofit backdrop support into the foam. Using L-girder construction, such support would be a simple matter of screwing a few vertical supports to the sides of the joists. But with foam, I (and by "I," I mean Bill) had to cut a channel into the foam to give the masonite backdrop somewhere to go (and a way for it to get down to and rest on the cross-slats.

Fortunately, a buddy loaned me a hot foam knife that I thought would make cutting this slot a quick job. But it was verrrrryyyy slooooooowwww. And just about killed us with fumes. (almost) Literally. 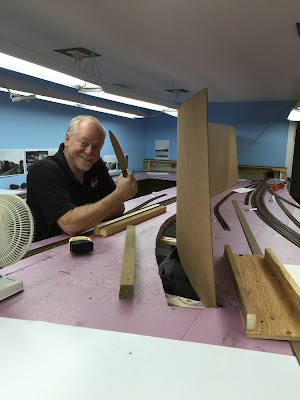 Eventually, however, the slot was finished and Bill switched over to a more-familiar tool. As you can see, the fumes from the hot knife hadn't quite worn off yet. This pic also shows what I meant by the masonite resting on the slats. 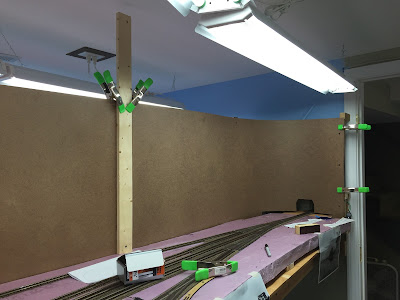 Since the peninsula is longer than 8 feet, I knew a joint between backdrop sections was inevitable. Unlike my previous method of screwing the masonite into a 1x4 backer board, this time I staggered the joints and used construction adhesive to secure them. No screws! and this method ensures as thin a double-sided (masonite) backdrop as possible - ideal when space is at a premium.

What you see above is the clamping I used to hold everything still while the adhesive cured. Fortunately, the adhesive itself didn't ooze out and cement the clamp to the backdrop(!). This view is looking "southeast" at Essex. 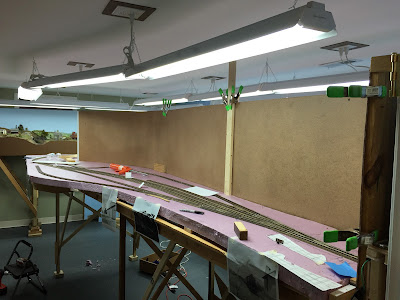 The above view is looking "northeast" at Essex . . 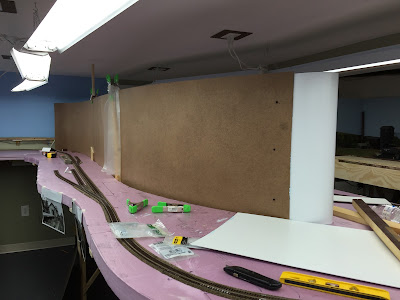 and this is looking "northeast" at Deep River.

At the end of the peninsula, considering how tight the radius needed to be, we tried some .060" styrene. In the other room, the end of the backdrop is actually masonite - bent sloooowwwly over the course of about a week, with a sprtiz of water helping the process along the way. 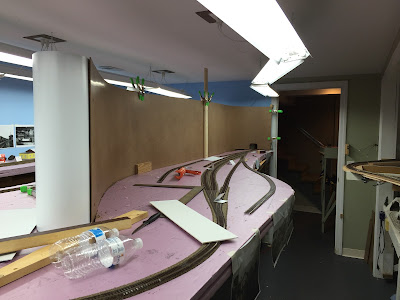 Using styrene on the end is much quicker and give you an even tighter radius. You just need to do something about the transition from the masonite.

Since the styrene rests "inside" of the masonite, there's quite a step, as you can see above. I could probably have used my  handy-dandy combo of fiberglass mesh tape and vinyl spackle - but it would have taken a LOT of spackle, and work, to smooth out this step sufficiently. 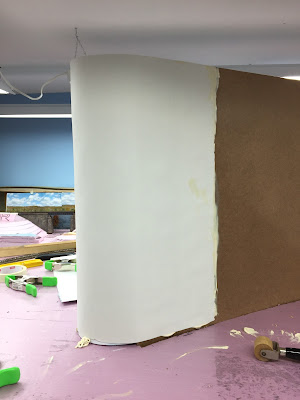 But I had some vinyl flooring left (from when I had coved some corners before) and figured it was just as useful going around the outside of a corner as coving the inside of a corner. As you can see above, it made quick work of that transition. I just used vinyl baseboard adhesive to glue it in place. 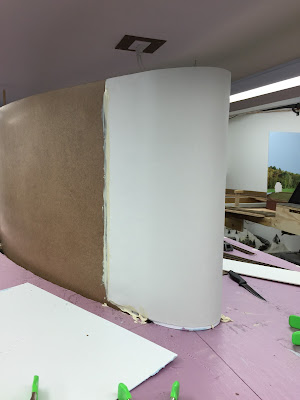 Then it was just a matter of using my mesh tape/vinyl spackle combo on the edges to smooth things over. Came out pretty nice. 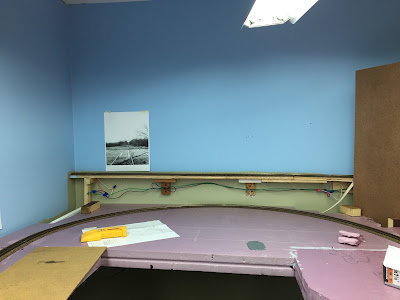 In the photo above, you can see the end of the staging track for the Air Line going above the turnback loop between East Haddam (left side of the aisle) and Deep River (right side). 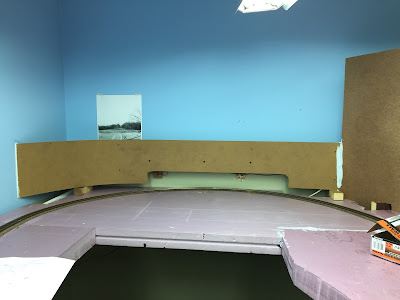 Another piece of masonite - cut for clearance - does an effective job of hiding the staging track. The ends are blended in with - you guessed it - mesh tape and vinyl spackle.

I had considered using one 2' high 8' long piece to go around the back of the loop and save me that joint on the right. The top would then have been at the height of the masonite you see on the right. But not only would that approach have been pretty unwieldy, even more important, having it low like this allows me to access the staging track in case there are ever any problems. And if I'd made that track INaccessible, I would certainly have had problems - guaranteed.

Once all the screw heads and joints were covered with topping, and sanded, and covered again, and sanded again, it was time for paint. Without boring you with THAT process (nothing innovative here - just get a roller and paint it, twice), you can see the results below.


Except for a small section of backdrop that I'd like - eventually - to do behind/above the west end loop on the Shoreline (and maybe, just maybe, a short section on the other side of the wall between Old Saybrook and "New London"/east end staging), I should be done with backdrops for a while. And none too soon - I need to get going on scenery and REALLY want to get some more operating sessions under my belt.

So I don't expect much more construction to be done before the tour during the New England/Northeast Railroad Prototype Modeler's meet early next month. If you're at the 'meet, I hope you can make the trip down the river and drop by.
Posted by Chris Adams at 11:44 AM

Email ThisBlogThis!Share to TwitterShare to FacebookShare to Pinterest
Labels: Backdrop