I'm considering using switch machines for the turnouts in the Saybrook scene. Thing is, I haven't used or installed a switch machine since I used Atlas Snap-Track back in the early '80s. And "install" is overstating it with those things. So I'm pretty intimidated by the prospect of powering my points.

Thankfully, PeteL had on-hand a spare of the machine he uses: The SwitchTender from Micro-Mark. And, even better, he agreed to bring it over for me to try.

I approached this install fully expecting to spend the whole afternoon, taking my time to be careful. Consequently, I was very skeptical about the "Installs in under 5 minutes!" claim. But I have to say, while it did take me longer than 5 minutes, I really can't imagine the install being any easier than it was.

I won't go into a play-by-play of the install, but the basic steps are:


Things went very well according to the instructions (which you can view here for more details). Since my turnout had not yet been installed, things were especially easy. The instructions for installing the machine on an in-place turnout are understandably more involved.

That all being said, I quickly discovered (and Pete filled me in on) a couple of tips that the instructions don't mention, but which I think you'll find helpful. I sure did.

Tip #1 Unless you're afraid of scenery material falling down through the hole, drill a 1/4" hole for the actuating rod rather than the 2-1/8"-holes-side-by-side-and-1/16"-apart that the instructions call for. They intend for you to make a little slot for the rod to move in, but it's a very fussy process and would likely be fussy in operation. Best, in my mind, to provide lots of clearance, and more easily.

Tip #2 If you're using Micro-Engineering turnouts, you should remove the little point locking spring since the machine isn't quite powerful enough to move the points against that spring. Besides, you want the points to move smoothly - not snap over.

Tip #2a Speaking of ME turnouts: the supplied actuating rod (for newly installed turnouts) is .046" copper wire. The holes in the ME turnout throwbar are a bit smaller (.035"), so I used a small (#56) drill bit in a pin vise to ream out the throwbar hole. Incidentally, while ME turnouts have 3 throwbar holes, I opted to use the center one.

Tip #3 No matter how tight you think you tightened the bracket mounting screw, the machine will likely work the bracket loose over time. So Pete suggested installing two "stop screws" at the back of the bracket, like this:

Tip #4 Use a 7/16" wrench to tighten the bracket around the machine. The instructions don't mention needing this tool, but you won't be able to get the bracket nut tight enough with just your fingers.

Below is another picture of my install, with the resister wire-nutted to one of the motor leads: 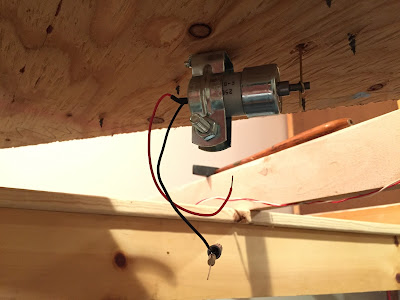 I tested the machine by hooking up a pair of temporary wires from the motor lead & resistor to an old 12v power pack. Worked like a charm. To move the points the other direction, I just switched the wires. Of course, that's just for testing. For a permanent install, you'll want to use a DPDT toggle switch to reverse the polarity - or the Micro-Mark-recommended 3PDT switch (if you plan to power the frog). 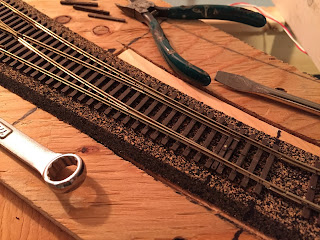 The last step, once I was satisfied everything was well-adjusted and working properly, was to cut off the excess actuating rod. As you can see (or not), it's barely noticeable.

All in all, I'm very happy with the machine and how easy it was to install. While it did take me longer than 5 minutes, I can certainly see me getting to sub 5-minute installs after another install or two. The SwitchTender is also economical: $15.95 for a single, down to under $12 each for 100 or more. Check the website for quantity discounts at other levels.

Even at those prices, powering turnouts isn't an inexpensive proposition no matter how you cut it, and I don't even have that many to do (the rest of the layout outside Saybrook will be all manual turnouts). And remember you'll also need to buy a power supply, toggle switches, and wire.

But the idea of having at least my mainline turnouts powered in Old Saybrook is VERY attractive. I've been researching the Saybrook tower (here and here) and it would be awesome to be able to have a "Tower Operator" position during operating sessions. I just don't know whether that'll work logistically - Is there any limit to the distance the toggle switch can be from the switch machine it controls? I'm considering having all the Saybrook turnouts operated by toggles on a control panel above what could be a "towerman's" desk - which is about 10-15' away.

It's certainly an intriguing idea, but first I need to decide whether to go to the expense of all those machines. At least in the case of the SwitchTender, I won't have to worry too much about the installation.
Posted by Chris Adams at 12:30 AM