Crossover in a Hole

One of the failings of the last ops session was not being able to get a train from "New Haven" (west end staging) to the proper track in Old Saybrook (eastbound, Track 2) without first entering the Saybrook scene and destroying the illusion. We got around the inaccuracy by temporarily adopting the fiction that eastbound trains were "wrong way running" due to some track maintenance. Actually, that really wasn't too far from the truth. But that session made it clear to me that I wouldn't be comfortable adopting this fiction permanently.

So I needed to figure out how - somehow - to install a crossover somewhere "west" of the Saybrook scene. The problem is there's precious little real estate available and what there is is just about impossible to access. 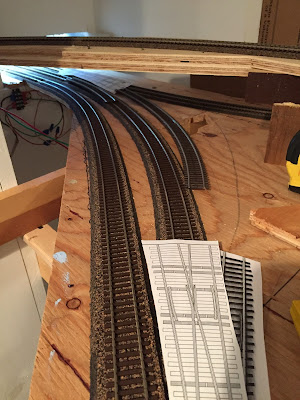 The photo above shows a mockup of the only location the crossover could go. Behind you and to your right is the turnback loop that has the staging yard coming off of it. That light in the distance - in about an 18" square alcove/cubbyhole - is the opening in the wall where you enter the Saybrook scene. And if that wasn't bad enough, that's the Air Line crossing overhead.

The turnout templates are located the only place they can go. The one in the foreground ain't so bad. But how on earth could I install the one in the background? 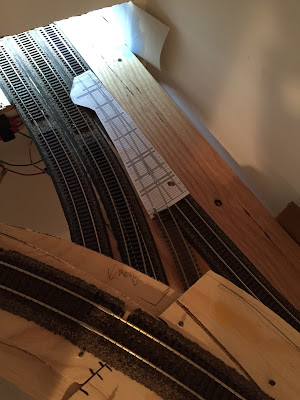 Above is an overhead shot of the tough turnout location. Given what I knew would be a huge challenge, I hemmed and hawed for a while hoping another solution would present itself. 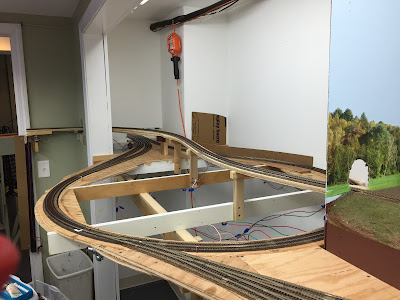 Here's a long-shot overview. The little cubbyhole is in the background, the Air Line is overhead, and you can see the turnback curve and the staging yard throat. See my problem?

Well, you've probably already guessed that I ultimately decided to bite the bullet and get that crossover installed. But first I had to make the area as accessible as possible. That would require removing the Air Line.

Unfortunately, since that section from the module to the drop bridge is all one piece, it all had to come out - drop bridge and all.


The above shot shows the extent to which I was able to make the area "accessible" - which is to say, not much. You can barely make out a tiny area behind that passing track, in alcove/cubby to the left of the hole in the wall. I didn't measure it, but that's the hole I'd have to pop up through to access the area to install that back turnout. Actually, I went back and measured - 11"x16".  Good thing I haven't put on any more weight (and it provides a huge incentive against gaining any in the future!) 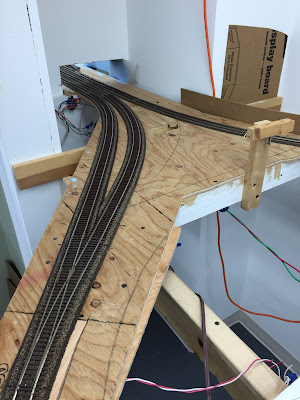 Closer view - yes, I actually fit in that little hole. Just barely. I'd have to put my arms up through it first and press up using my legs. Sometime I couldn't even use both hands to work, since one arm would be raised up resting on the wall above. 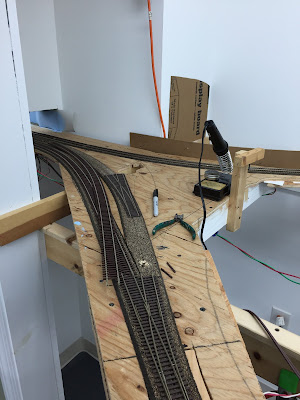 Trackwork finally starting. While I use Micro-Engineering track almost exclusively - and am using ME turnouts here - I used Atlas flex for its ease-in-curving. I wanted to make this install as painless as possible and the Atlas flex would take a natural, easemented curve - and it'll be hidden eventually anyway.

Pictures being worth a thousand words, here are a few thousand "words" about the rest of the process... 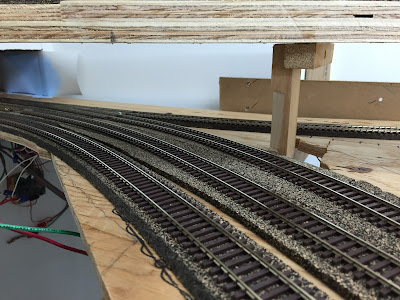 The pic above shows the Air Line reinstalled and the riser put back in. You may be able to make out the fact that I chiseled the corner edge of the riser for clearance. Wasn't totally necessary - 80' passenger cars made it through no problem, but they were a little closer than I wanted. And I wanted to have some margin for the future (in case of a long steam loco cab overhang, for example). 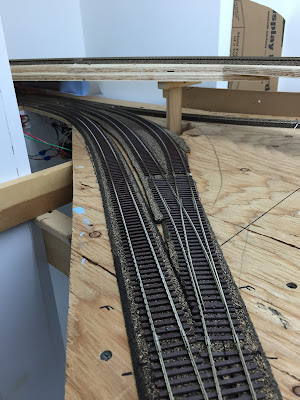 And above is the "finished" photo. Compare this to the pic at the beginning of the post. All went according to plan, despite the tight fit. Before reinstalling the Air Line though, I ran all my equipment forwards and backwards at varying speeds through the Tough Turnout to be sure there would be no problems. I certainly don't want to have to get back in there any time soon to do any adjustment - but I think it'll be ok. Heh - it'll have to be.

Looking back on it though, there's really no way I wasn't going to do this crossover - eventually. Now my eastbound trains will enter the Saybrook scene on the proper track and that'll go a long way to perpetuating the illusion that the trains are actually coming from "New Haven."

And I can check another thing off the punch list . . .
Posted by Chris Adams at 7:35 AM