I'm so messed up.  I took up running in the depths of winter, I've often biked in the snow, and this past weekend - during a Top Ten Summer Day - I was in my basement working on my model railroad.  I may need a refresher on what seasons are appropriate for what hobbies, but, like Mike Rose, I tend to work in spurts, when the motivation hits.  And motivation for layout building has been hitting hard lately. Mike's a cyclist too.  Maybe it's a thing.

If I wasn't already motivated, I also scheduled another operating session for this Friday evening.  Any layout owner will tell you that a looming ops session will get you going like nothing else.  Amazing how deadlines help get things done.  So, despite the gorgeous weather, my buddy Roman came over to help me get through some of the punch list.

Long-time readers may remember that the two 2x8' modules I built (and which are stand-ins for the Air Line) can be operated with DC as well as DCC power.  To accomplish this, I installed cut-out switches so that the two sources of power wouldn't be on at the same time & I could choose which one to use.  While *I* know what those toggles are for, I wanted to be sure that nobody would mistakenly throw them (especially since I also use toggles on the modules to change frog polarity).  So Roman brought over his label maker and did some labeling:

You can see this switch in context in the photo below (at the right end of the Mill Hollow module).  The other toggles on the fascia control frog polarity and there's a schematic of the town's track layout taped on it as well. 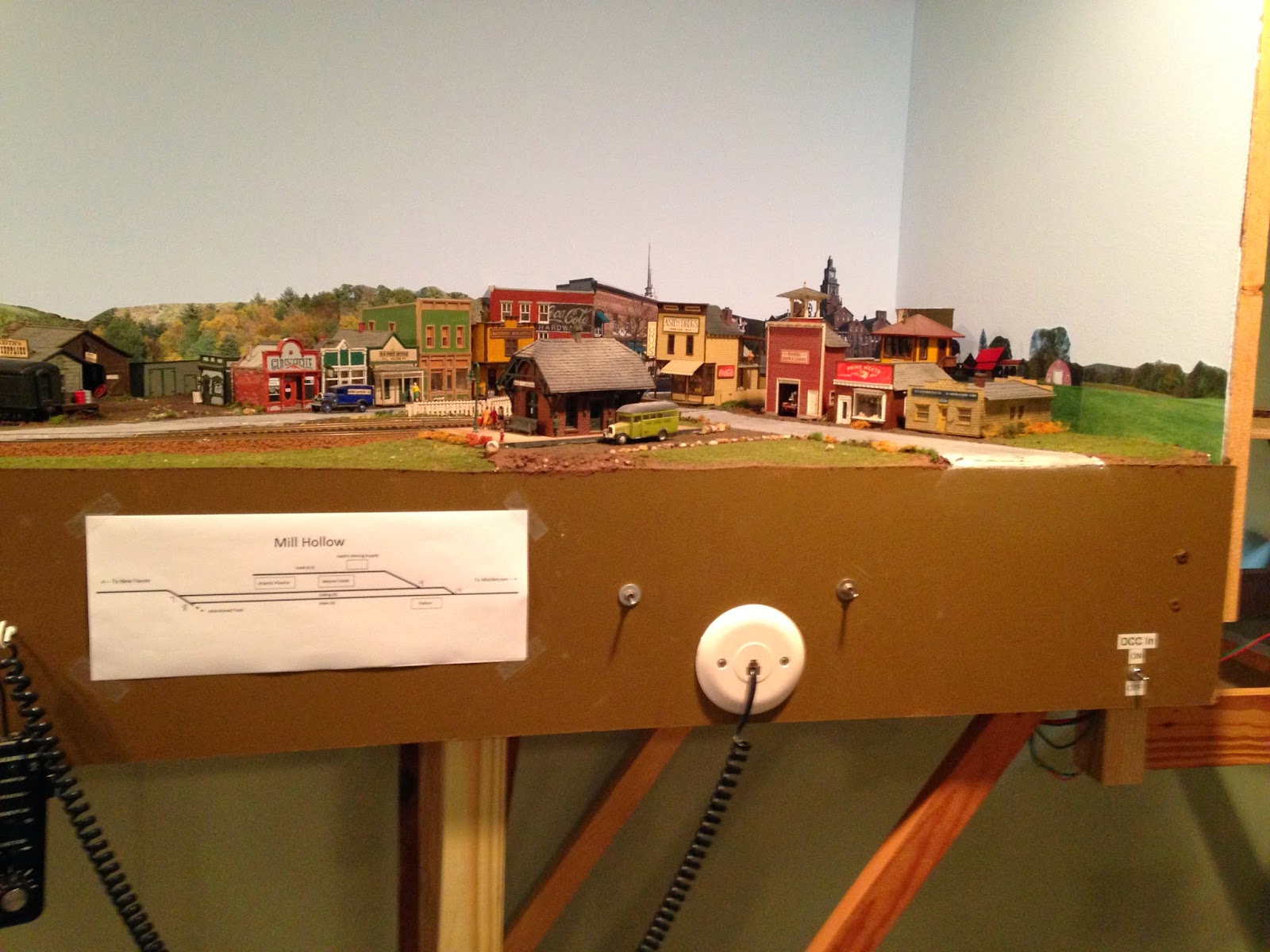 One other thing Roman did with his labeler was label each of the toggles with a number then add that number to the corresponding frog/switch on the schematic (click on image to "embiggen"): 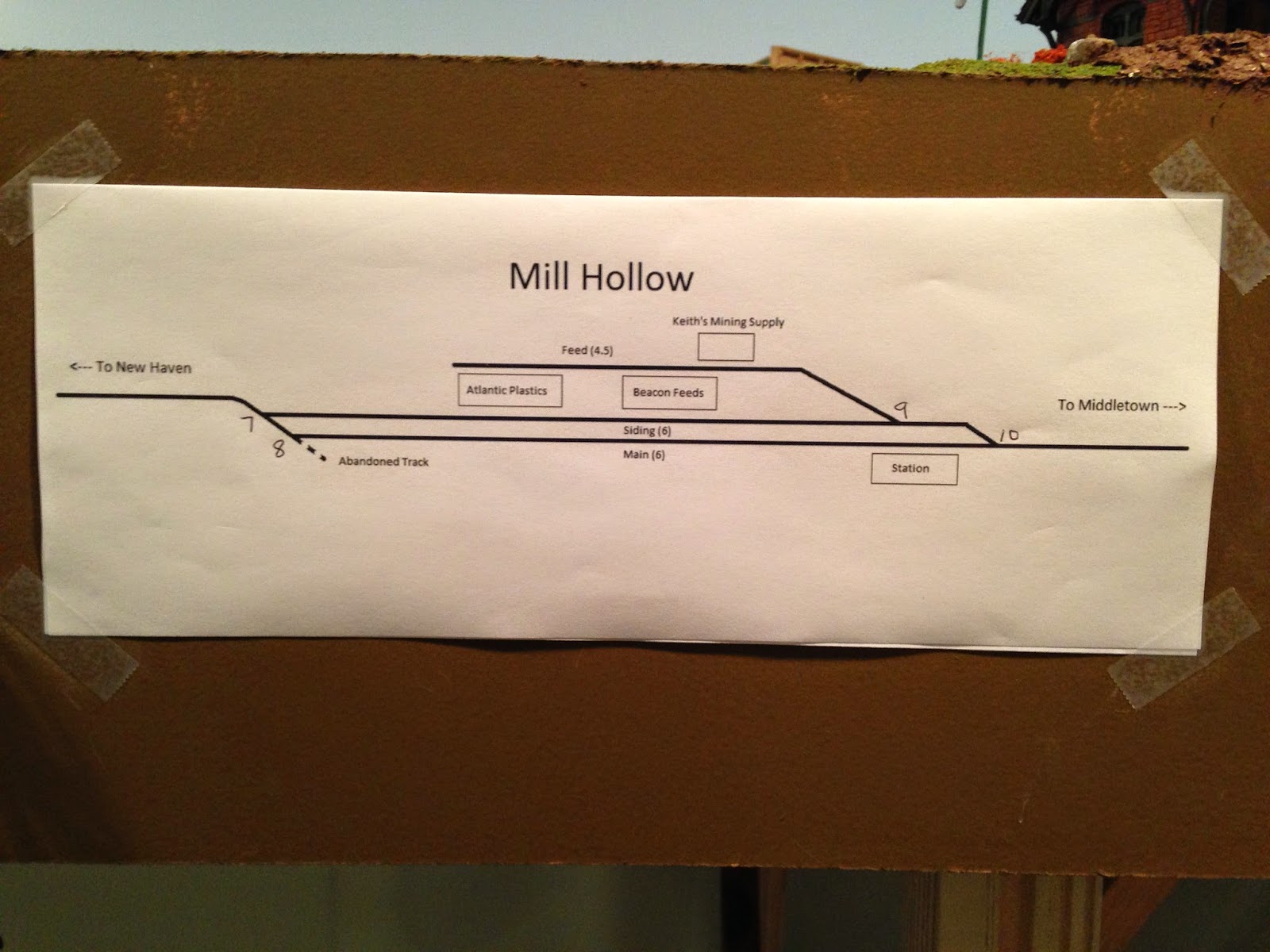 The last time we had an ops session, Roman was on the Air Line local, switching the towns on these modules. Suffice it to say that the crews found the frog toggles very confusing and there was a lot of shorting out (with the companion squawk of the circuit breaker buzzer).  Hopefully having all the frogs & toggles numbered & labeled will at least reduce confusion if not eliminate it.  But even so, this is only a temporary solution until I can determine whether frog juicers can be used on the modules, despite the fact that I occasionally use DC power rather than DCC (e.g. do the juicers just not funciton?  Or will they actually get damaged?).

After the labeling was finished, Roman got started on a project he'd been itchin' to do ever since he completed some cardboard webbing - Plaster Cloth!


Despite the fact that we used plaster gauze (rather than plaster-dipped paper towels) and put down drop cloths, there was/is still a LOT of mess.  Even after vacuuming up what I could, there are still spatters of plaster & "plaster water" all over my nicely painted floor :(  I think it'll clean up with a bucket of warm water, Murphy's Oil Soap and some elbow grease, but we really need to come up with a better system if possible.

Speaking of track, while Roman was up to his elbows in hill-making, Randy came over to help put in some feeders.  A couple more "humps" had developed in the trackwork, so I used my handy-dandy Dremel to cut some "relief" gaps.  Things settled down nicely, but those now-electrically-isolated sections had to be re-energized.

In addition, during a previous work session, Bill had installed a Shinohara turnout in Cromwell to create an additional siding for the Lee & Sons Coal Co. trestle.  I just had Randy solder feeders to the four rails past the frog - forgetting that Shinohara turnouts are "non-DCC friendly" - all the rails and frog are connected together and the points direct the power to each route (aka "power routing turnouts").  Of course I only remembered this when I turned on the system and immediately got a short.  Out came the Dremel, down went the cut-off disk, and this is what it looked like when I finished:

Three things to keep in mind with this "solution":


Finally, this morning I decided to skip my usual morning bike ride (remember from earlier how motivation works for me...) and get down to the basement instead.  I had 90 minutes, which I figured would be just enough time to tackle another problem that's been bugging me - the "alligatorization" of my backdrop seams.

I've had some success with fiberglass mesh tape in patching household walls, so I'm hoping it'll work for my backdrop too.

The mesh seems to me to do a better job of holding the topping and really binding things together.

I'll apply another coat tonight, then sand & paint it.  I'll let you know how it works out - especially whether any flexing of the backdrop causes the seams to crack again.

I was pleasantly surprised that the taping/topping job went much quicker than I expected, so - buoyed by yesterday's success changing the topography in Wethersfield - I decided to do it again in Dividend (another area that should be much flatter than it was going to be).  But first, a couple of prototype photos to show what I mean:


As you can see, it's relatively flat - though the Billings & Spencer building is on a level a little lower than the mainline.  You can see better in the photo from 1929 how the switchback track goes downgrade. 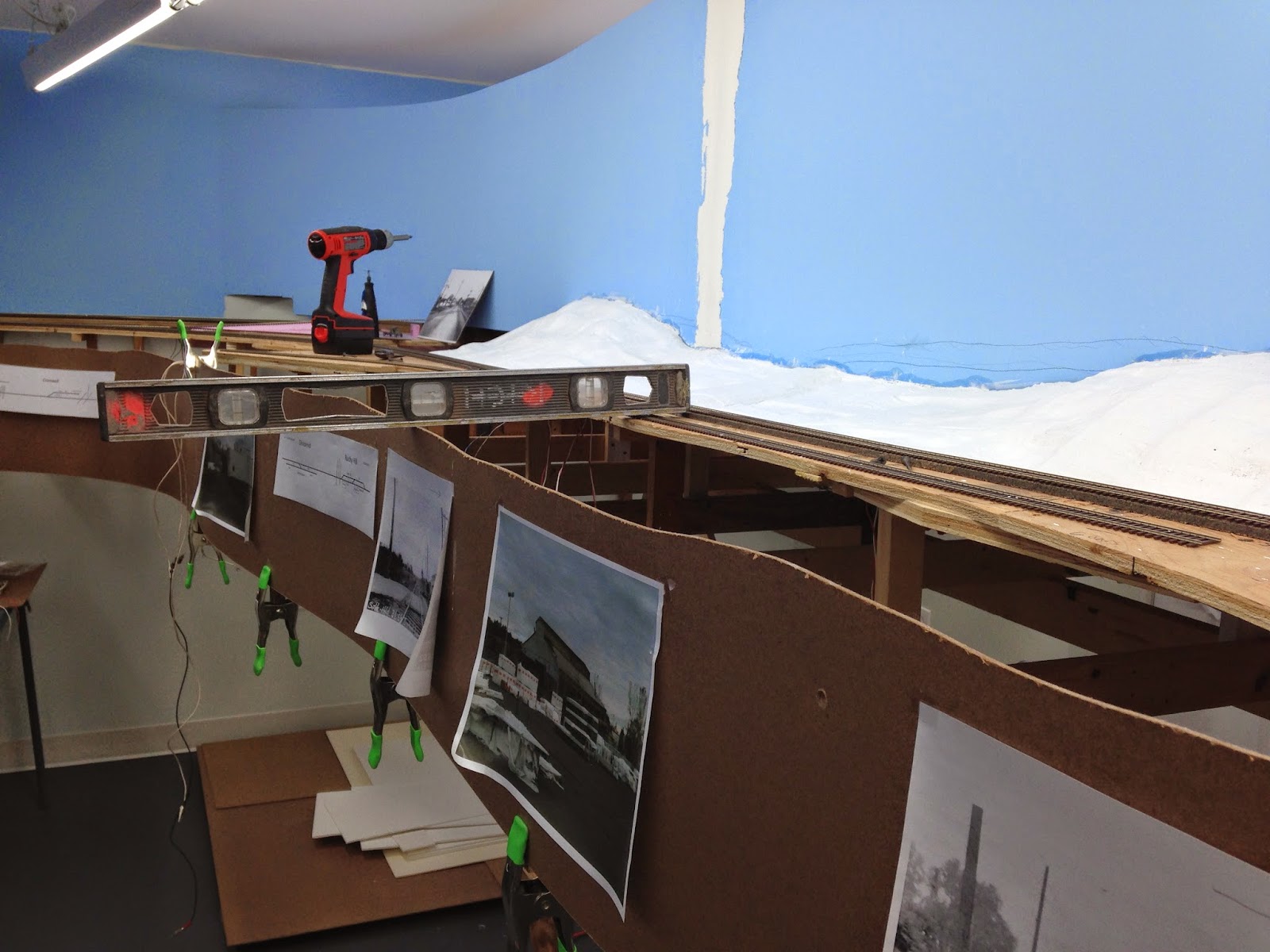 I raised the fascia to just about level using the same clamping technique I used in Wethersfield - but this time it was even easier since I didn't have to deal with any cardboard webbing.

I had to get ready to go to work so I had to leave things as-is-above - but not a bad 90 minutes' work.  It's finally dawning on me how smart it is to take advantage of chunks of time, no matter how little you think they are.  As long as you have a good to-do list (bonus points if it's organized by estimated time to complete each task!), you can dive right into something whenever you have a chance.

For too long and too often I've waited until I have large chunks of time to get in the basement and work on the railroad.  At that rate, I don't get much done - big chunks of time seldom seem to happen.  But with my recent spurt of motivation - and a good working punch list (not to mention a little lot of help from my friends), I'm finally making some progress!
Posted by Chris Adams at 12:45 PM