I had another operating session last night, trying out some new ops software & some other things. I'll do a more detailed post on that later, but for now I want to encourage you & your operators not to be afraid of BO.

Any operating session can result in some minor damage to cars, faulty couplers, etc, or just plain glitches that - thanks to Murphy & his Law - only crop up when folks visit to run the layout. Whenever those problems occur, the solution is to do what the prototype railroads do - pull the car for later repair.

I've designated a drawer for such cars - keeps then out of the way and makes it easy to transport them up to the workbench. Here's the crop from last night, sitting next to me ready to get fixed. 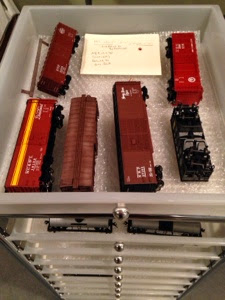 Nothing major - just a bunch of minor things that, once done, will make these cars ready to go back into service for the next ops session (which is good, considering I discovered that my railroad is woefully short of boxcars - but that's another story)

BO - don't fret about it, just do whatcha gotta do about it and move on :)
Posted by Chris Adams at 6:15 PM