I was at a NHRHTA volunteer appreciation picnic last Sunday and visiting with fellow member John Kasey, who had sent me lots of modeling information for the New Haven's Alco RS-1s and 2s (classes DERS-1b & DERS-2b). I asked him if I ever sent him photos of the finished models, and when he said I hadn't, I got on my phone and into my cloud photo storage to show him.

He enjoyed seeing the pics, but about half-way through as I was describing some of the details I'd added, he mentioned offhand: "You know, I could just wait and see it in next month's Model Railroad Hobbyist magazine."

I knew I'd submitted the article, but - although I'd downloaded the August issue - I hadn't gotten to the back page yet . . . 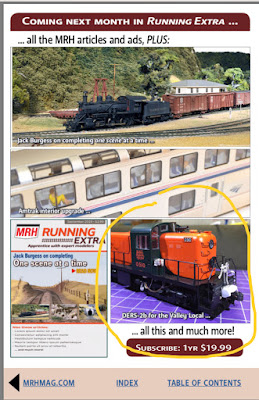 This will be my third major article for MRH (posts about the first article here and the second article here) and I'm especially lucky to be sharing a little bit of space with one of my idols in the hobby: Jack Burgess. His Yosemite Valley RR layout was one of the first - if not the first - "strict prototype" model railroads I ever came across. And it really set the hook in me to try and do something similar with the New Haven.... "someday."

Thankfully, in this case "someday" did eventually come & I've been working on the Valley Line for some time now - and needed some additional motive power for the Airline Local. Which is where DERS-2b #0510 comes in.

So be sure to check out next month's MRH for the story behind the engine - and, more importantly, how I went about superdetailing a factory-painted locomotive to match the prototype.

At least I know JohnK will be checking it out!
Posted by Chris Adams at 12:01 AM