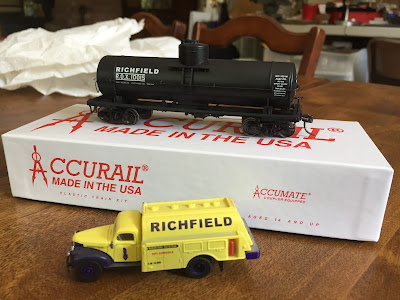 I mentioned the other day how the internet is an ideal way for model railroaders to meet and get together. Well, turns out, while I was Way Down South visiting my family (and, incidentally, Seth Gartner and his amazing layout) the postperson delivered a package that was waiting for me when I got back from my trip. . .

Among the many model railroaders I've met online - and specifically through the AML podcast - Jordan "Kozmo" Kramer is one of the youngest. While it's always nice to see "younger" (e.g. under-50 lol) folks in the hobby, it's especially encouraging to see them model the steam era. That makes Jordan - who's probably less than half of 50, and who models the early 1920s - a rare fella indeed.

As a steam era modeler myself, but just a little earlier than the popular "transition era" of the 1950s, I'm used to folks saying that such-and-such a car is "too old" for their era and asking me if I'd be interested in it for my layout. But I have to say I was initially surprised to have this young guy say he had a couple of cars that were too new for his layout and asked me if I could use them. One of them was the Richfield tank car you see in the photo above. I chose it since I already had a Richfield truck and (think that) there was a Richfield dealer in Wethersfield.

Model railroaders are a pretty thoughtful and generous bunch - and Jordan packed the car up and shipped it over, and wouldn't hear of me offering to pay him anything for it. Thankfully the package made the trip from OH to CT without incident and this tank car will be taking part in my next ops session.

Thanks Jordan! I hope I get the chance to return the favor soon - I'll definitely be on the lookout for cars that are "too old" even for me :^)
Posted by Chris Adams at 12:01 AM