Long-time readers know that John Wallace provided - and continues to provide - the primary inspiration for my layout. So, ever since I first thought of modeling the Valley Line as it was when he (unofficially) worked on it, I've wanted to include a model of the house he was living in at the time.

And thanks to my friend Dave Messer, I have an HO scale version on the layout. Click here for more on that. 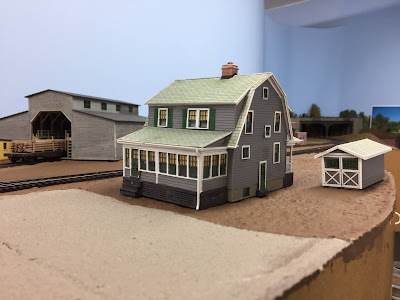 Getting this done so John could see it has been a big motivator in making progress on the Wethersfield scene and, though it may sound corny, I really wanted John to be able to see the house he grew up in, right where it should be on the layout. When the day finally came to show it to him, I wanted to be sure to commemorate the occasion. I'm just glad I remembered to take a few pictures. 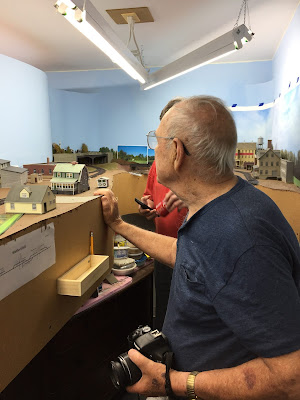 You may recall John's sharp memory of the Valley Line - even going so far as being able to correct some of my research with first-hand experience. 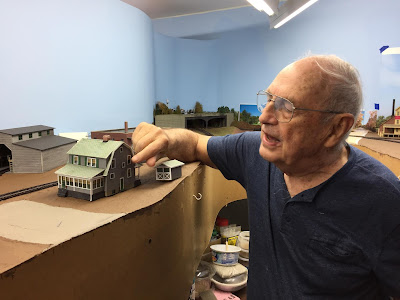 But as testament and high praise to Dave's modeling efforts, John not only thought the model was great, he pointed out some of the features of the house and shared some additional stories of growing up there. 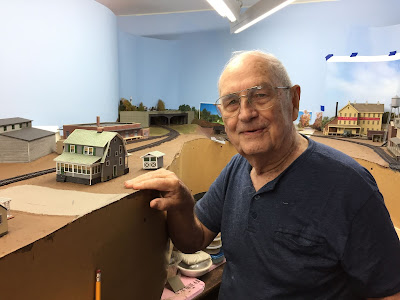 A VERY HUGE THANKS to Dave for an exquisite model of such an important building - and to John for being a continuing inspiration for the Valley Line.

Now if only I could create an HO scale version of him to put in the yard....
Posted by Chris Adams at 6:22 PM