A Visit to Seth Gartner's Layout

As Lionel Strang often says, the internet was created so model railroaders can get together and this past week, that's proven to be true. On my way down to South Carolina to visit family, I posted on a few model railroad Facebook sites that I wanted to know what there was to see in the area. Despite my initial flub of saying I was visiting the "Charlotte, SC" area (there is no "Charlotte" in SC), Lionel texted me right away asking if I wanted Seth Gartner's number. And from that initial - and I should note very fast - contact, I was able to arrange a visit to Seth's beautiful layout.

Although I've heard him on the AML and Model Rail Radio podcasts, I'd never met Seth in person. But podcasts tend to remove those "first date jitters" and I felt like I knew Seth from the moment he came to the door and we shook hands. Of course, his great hospitality and friendliness would have done that even without the podcasts.

Seth models an area in Ohio based on where he grew up and he's done an impressive job of capturing the look and feel of the prototype - and has even included a lot of actual prototype elements, including a scratchbuilt model of the yardmaster's office where he used to visit when he was younger. The town of Minerva itself, while of course having to be selectively compressed, includes all the major elements and "spotting features" of the area, including the factory his grandfather started and an interesting use of a roundhouse. But more on that later.

You don't typically think of Ohio being coal country, but true Buckeyes know that Ohio has a rich history of coal mining. And, despite a steep decline in the industry, Ohio still ranks 10th out of 26 coal-producing states even today. Consequently, Seth's layout includes a lot of coal mines along the line. In keeping with the prototype, many of these are strip mines (underground mining is more typical in WVa, for example) and he's used a bit of modeler's license to include more mines than might have been active during his 1960s timeframe. But the whole presentation is very effective - and, frankly, I wouldn't have known that coal wasn't still king in 1960s Ohio if he hadn't pointed it out.

In fact, the entire layout is incredibly effective, with almost all (guessing 80-90%) of the scenery done. He focuses primarily on the NYC, but the P&WV and other roads make an appearance through interchange - either actual/active, or by representation. It's a double-decked layout, but there's no helix. Seth has very cleverly developed a way to get from one level to the other via a long, folded back-and-forth "no-lix" that allows operators to see their trains occasionally in scenes along the way between the two levels.

While the towns along the line are cool - and provide the bread & butter of TT&TO operation - the highlight of the layout, for me anyway, was his modeling of the steel industry at one end of the layout at the top level. You see it on the left when you get to the bottom of the stairs and it is truly impressive.

But enough of my ramblings. Pictures are worth a thousand words and, frankly, you'll appreciate what Seth has accomplished far more through photos than through my inadequate descriptions. They don't do full justice to the level of his modeling (I'm no Lou Sassi), but hopefully this selection of views will give you just a taste of what it's like to be in Ohio coal country during the 1960s. 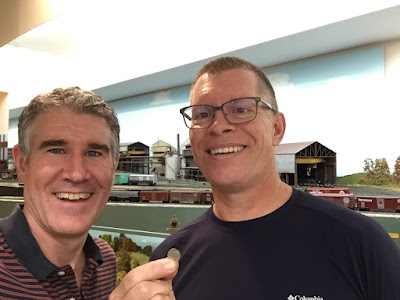 Thanks again so much to Seth for being willing to let me visit him and his great layout on such short notice. And he even remembered the dime for scale (AML listeners will get the reference ;^) Already looking forward to my next visit!
Posted by Chris Adams at 6:49 PM