I'm learning that the best way to learn how to do scenery is to get really good at making mistakes and then correcting them. Even "two steps forward and one step back" results in progress over time. And I've spent far too long avoiding the "one step back," never getting around to the "two steps forward."

And that, in a nutshell, explains why it's taken me so long to get around to doing scenery. But, thankfully, my attitude is changing and I'm making some (slow but steady) progress as a result.

When last I left the scenery in East Berlin, I had just completed what I thought was a pretty clever idea of pressing the structures down into a layer of ground goop (protected by plastic wrap) so that the structures would literally sit down into the scenery. Well, I think I didn't use enough goop and/or the goop I had was too lumpy. Suffice it to say that that experiment didn't quite work out as planned. But I'll try it again sometime.

Unfortunately, the process resulted in some "watermarks" in the scenery:


I'm not sure whether I used too much water in my mixes, or there's too much clay in my dirt, or I just saturated things too much. But fortunately, it was relatively easy to fix.


That seemed to work well until I checked the next morning after, presumably, everything was dry . . . 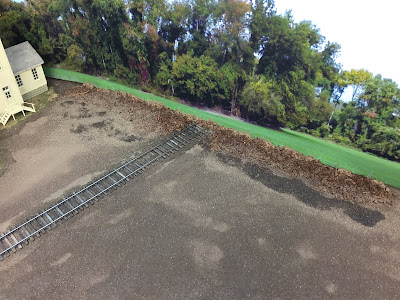 The answer, it turned out, was More Dirt! Well, that and a little bit of alcohol (sprayed on, not consumed).

I took my diluted glue mix and brushed it on the entire area in the corner, then sifted on More Dirt until the glue was completely covered (even waiting a few minutes to see if any wetness/dark spots would emerge - then covered that with Even More Dirt).

Then - and I think this may have been critical - I lightly sprayed the entire area with 70% isopropyl alcohol. Just enough to dampen everything - not enough to make it wet or dark. That's supposed to cause the glue to wick up through the dirt to secure it, but not with enough moisture to darken it. 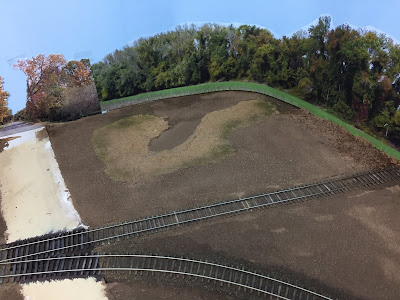 The above photo shows the result. Notice not only are the "water stains" gone from the right end of the pic, but the overall "tone" of the area is much more even than it had been. And here's the structure in place, looking pretty nice. But it needs some static grass. So that's what I experimented with next . . . 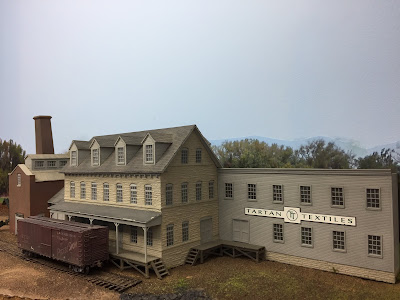 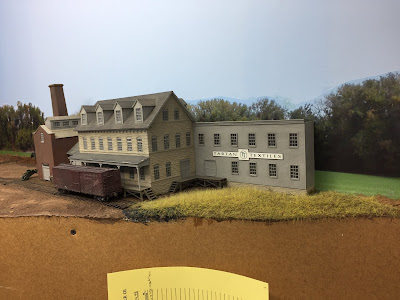 And here's what that corner looked like after, literally, about 15 minutes - using the technique Marty McGuirk described in his article "Modeling Fall Forests" (Model Railroader, Nov. 2015). I took pinches of a variety of colors and lengths of static grass, "cocktail shakered" together, and applied to full-strength white glue, spread evenly, and spritzed lightly with "wet" water for conductivity. 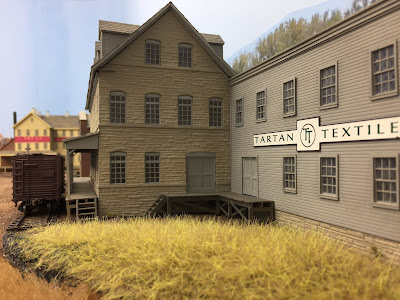 The lengths varied from 6-10mm, which turned out to be a little tall for this area (at least to my eye - what do you think?). 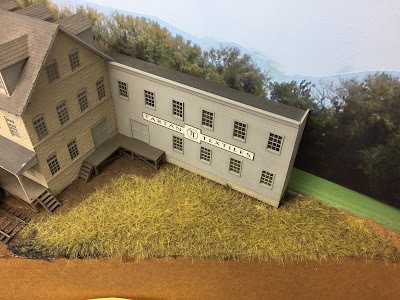 It also didn't cover as completely as I expected it would, even after going over it a couple times during the same application. Next time, I may try hitting the grass with some hair spray and applying another "coat." I may also apply the base ground foam more heavily, so that less of the brown/dirt shows through (heh - that would certainly undermine my reason to obsess over how "even" the dirt layer is...) 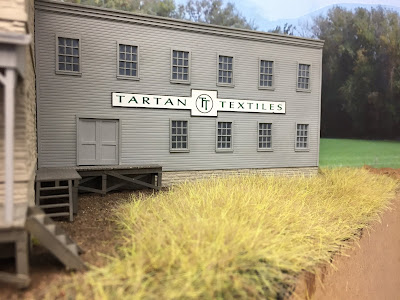 One of the things that occurred to me when looking at the photos (versus during the heat of application) is that color of the static grass is nowhere close to the color of the grass on the backdrop - which, despite its being a prototype photo taken in early October, still looks too green. But I'm slightly color-blind, so what do I know? 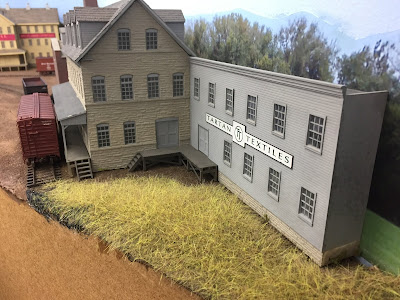 But the main reason I'm planning on ripping out all this static grass is that this area really should be a gravel/dirt lot to allow trucks to back up to those loading docks in the corner. Thanks to KenR who pointed that out on the The Valley Local Facebook group and to PeteL for confirmation.

So the next step will be to rip out this area. I'm not even gonna bother trying to salvage the grass. It only cost me a few pinches of flock and a few minutes of time. But the lesson learned here is worth so much more. And, hopefully, the scene that results from the re-do will look even better and more realistic.

As always - and especially as I'm learning this scenery stuff - please weigh in with your suggestions/tips/guidance!