It's nice and easy out on the Valley Line - the local freight meanders along, stopping as needed along the way to shuffle cars and throw switches. On the branchlines, the switches (a.k.a. "turnouts") are thrown by hand - and on my layout the points are moved by a finger (MicroEngineering turnouts have points that lock with a center-over spring).

But down on the Shore Line where the Valley connects in Old Saybrook, it's a different story. The switches are thrown remotely by the Saybrook tower operator. And on my layout, they're thrown by machines controlled by toggles on a control board. It's a pretty cool contrast to how things are done on the branch. But it's pretty annoying when you have to add additional turnouts. In addition to a new machine, every new turnout needs a new toggle (though crossovers can be controlled by 1 toggle), so the toggles need to be added to the board. And the diagram on the board itself needs to be changed eventually too.

The prototype had to do this from time to time as well, so that's some consolation.

Thankfully, my panel doesn't need to be modified quite that much - and I'm adding, rather than subtracting track, which results in more white pencil lines rather than blackout...

First step was to run additional power lines from the panel to the machines. As I described here, power goes from an old 12v power pack, through two buslines (+/-) in the panel. The toggles are soldered to the buslines and are connected to a terminal strip. From that strip, 18ga lampcord goes 25' from the panel, under the stairs, up and over a doorway, to another terminal strip. And from that strip, more lampcord goes to each machine.

So, opening up the panel, here's what we see (click here for how I built the panel): 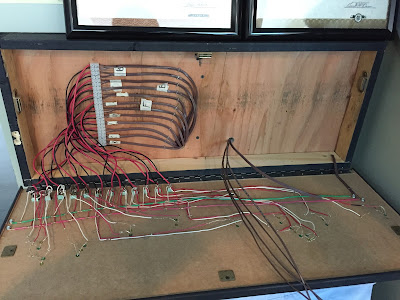 I've already drilled a new hole for the additional wires and the new wires are poking through.

Next, I needed to drill new holes for toggles, including routing out recesses (as described here).


Drilling/recessing these holes was my biggest mental hurdle, but once I'd gotten the bit between my teeth (sorry for the pun) it actually went quickly (if stressfully). 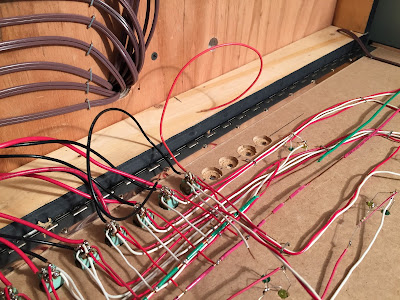 Having previously wired up the additional toggles conveniently at my workbench (as I describe here), it was just a matter of putting them in - the most complicated task was soldering the toggle wires to the power bus (I ended up unsoldering a couple of the other connections in the process, but that was easily corrected - once I discovered the problem). 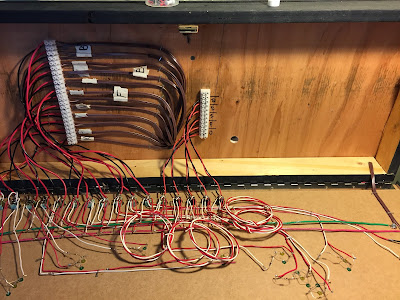 By contrast, one of the least-stressful (and almost relaxing) steps in the process, was cutting the remaining wires to length and connecting them to the terminal strips.


It was a long process and I would have been perfectly happy if it hadn't been necessary. But for the most part, there was nothing particularly difficult about it as I'd already done it all before %^) 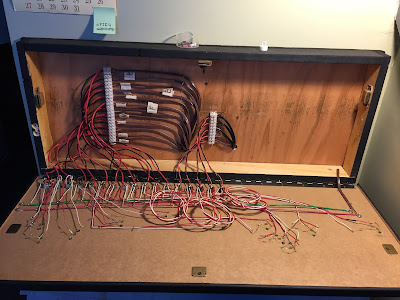 The pic above show everything all connected. Well, almost everything. As you can see (or maybe not, considering the bundle of wires) there are some loops of disconnected wire. Those are the wires from the new toggles that will go to the LED indicators. I haven't done those yet because 1) I need to find 3 more 5mm green 3v LED bulbs, and b) I need to redo the track diagram (and by "I" I mean Bill, hopefully) and won't know where the bulbs (and their associated mounting holes) will go until that's (re)done and (re)mounted.

We'll make it look all nicey nice when I/Bill have the extra time. That'll be "Control Board, Part 2." But for now, everything is functioning so it's ready to go for my next shake-down session.