I mentioned in my last post how uncomfortable I was trying a new method of benchwork (well, subroadbed) construction. I've done very well in the past with L-girders/joists/risers/plywood. But now I was going to try L-girder/slat/foamboard construction instead. And for some reason, I just Could Not get my brain wrapped around the foam concept. Here's an example of what that looks like: 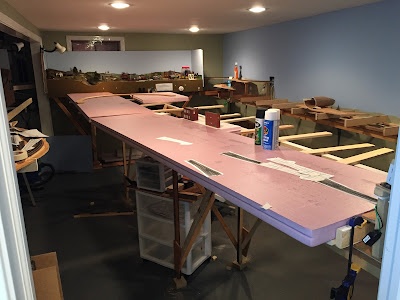 Notice something familiar about the picture above? I've laid out the foam exactly as I would have laid out masonite to support kraft paper for marking out the subroadbed. I couldn't figure out how to fill in the resulting gaps between the sheets of foam, or how to transition from plywood subroadbed to the foamboard. Sending this picture to Bill convinced him that I really Have Absolutely No Idea what I'm doing - so he yelled at me to stop graciously asked me to do something else until he could come over and make some sense out of the chaos I'd created.


Turns out, you butt all the sheets together, creating a (very) large table top. Bonus if you remember to have the tongues go into the grooves.

I must admit, I'm starting to warm up to this method of layout construction . . . Slooooowwwwly. If you're considering it too, here are a few tips I figured out along the way (in addition to the tongue & groove thing I mentioned already) .. . 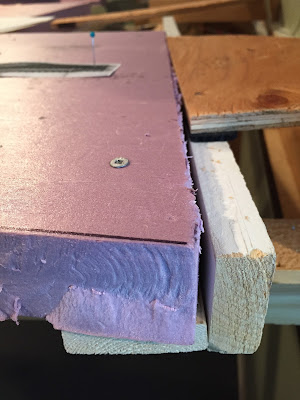 Here's how I transitioned from plywood subroadbed to foam. This spot is at the south end of Essex, just after the subroadbed comes through the tunnel from Saybrook. I'd wanted to have plywood attached to the liftout support - so it's attached there and attached at the other end to this joist (vertical 1x3). The foam is attached to the slat (horizontal/flat 1x3). I used foam-friendly construction adhesive to glue the foam to the slat and to the joist. Of course, I used screws to attach the plywood to the joist. 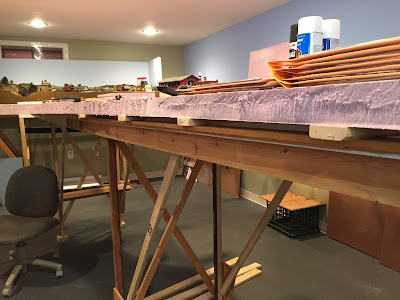 Here's a good view of the foam on top of the slats. I attached the slats to the L-girders with screws screwed in from underneath and through the flange (just as in traditional construction). The slats have been trimmed back to match the edge of the foam. My masonite fascia will screw into the ends of the slats (and also be glued to the edge of the foam, when there isn't a gap between the two). 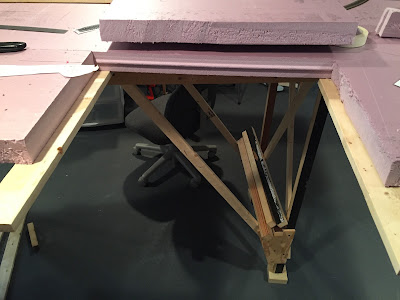 Joints between foamboard sections are supported by slats. You can move the slats around to get them in the proper position before gluing the foam to them. 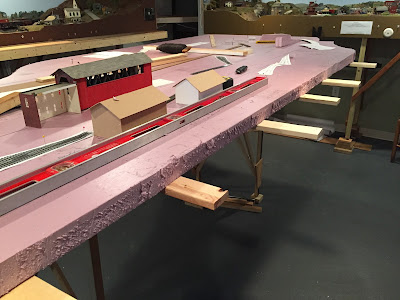 This is the Deep River side of the peninsula, showing slats that still need to be trimmed back. I spaced the slats roughly 16" apart and did my best not to have more than 12-15" of overhang (if they were on-edge, as joists, I could easily get by with 18" overhang). I ended up moving my L-girders apart and closer to the outer edges of the peninsula to provide more support for the slats. Alternatively, I could have installed outrigger legs, but I'm trying to have as few legs/obstructions as possible under the layout. 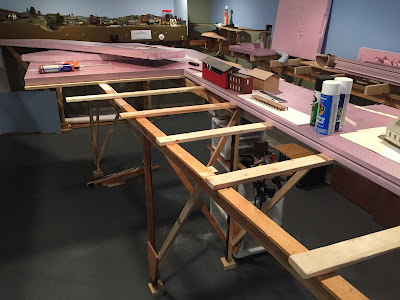 Once everything is positioned the way you want, take off one section of foam at a time . . . 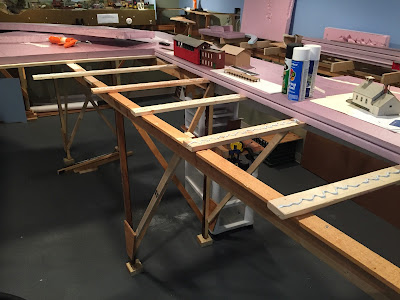 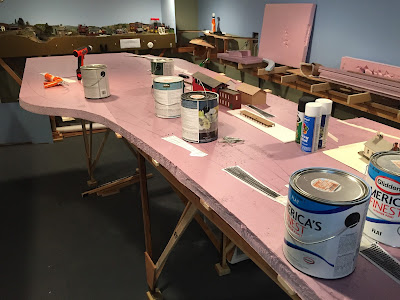 Replace the foam, "pin" it in place with long(er than 2") screws, and weigh it down. I'm using cans of paint here. 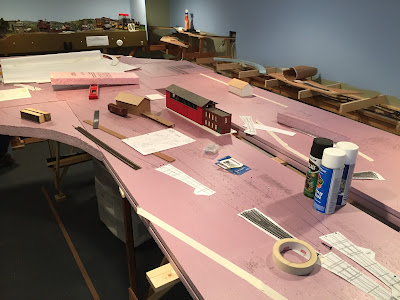 I'm back to figuring out my trackplan and structure placement in Essex. But once I have everything where I want it, I just have to mark my centerlines and install cork roadbed and track. I won't need to do all that on kraft paper, cut it all out to make templates, put the templates on sheets of plywood to cut out the subroadbed, install the subroadbed on risers - and then after all of that, still have to fill in all the gaps between plywood, fascia, and backdrop with cardboard strips and plaster cloth(!)

No, I'm not yet a confirmed foamer . . . but I'm getting pretty close.