A Busy Month Laying Track from Essex to East Haddam

It's been a month since I started to tear up the "East End" staging yard and began my Final Big Push to complete the mainline in time for my shake down ops session last Friday. Despite the usual setbacks along the way (house stuff, work stuff, life stuff), I've been very lucky to have an understanding Missus who's let me spend whatever spare time I have in the basement. Only my workout routine has suffered (I've been working on the railroad rather than working on my cardio).

But all that time has certainly paid off - I've accomplished more in the last few weeks than I have in the last bunch of months. I won't bore you with a play-by-play description of each day's tasks, but I thought it'd be fun to review some of the highlights (and give myself a handy reference point for seeing my progress along the way). 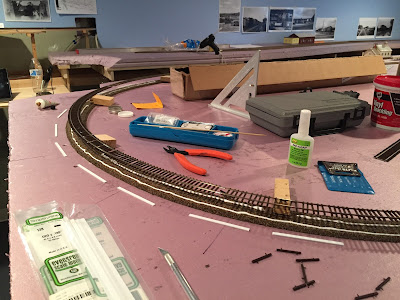 So, I laid a "vertical easement" of a couple of lengths of .020" & .040" strips to transition to the .060" height. I used Aileen's tacky glue to attach the strips and track to the cork, and used thick ACC to attach the track (ties) to the styrene strips. 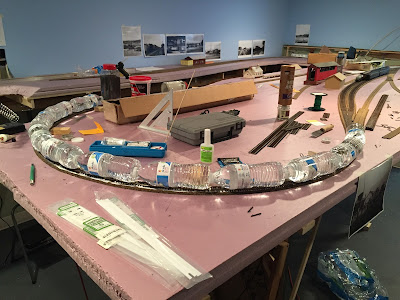 Then I used my handy-dandy water bottles to weigh everything down to dry overnight. 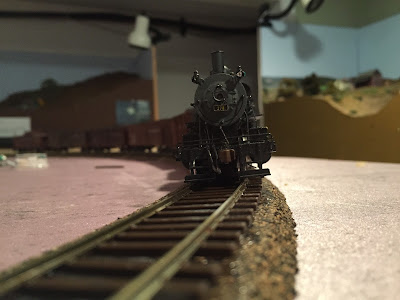 The extra thickness of the .060" strips really makes for a dramatic lean, but I was afraid that so much height on the outside rail (it's 5.25 scale inches - a lot) might affect operation - especially given that the first time I ran the K-1 backwards through the curve the tender kept wanting to tip over. But - inexplicably - things settled down (I think one of the tender trucks had a slight, temporary bind) and I've run trains, including long passenger cars, back and forth through this curve with no problems And where .030" superelevation was barely noticeable, you really notice it here. It's a real treat to see the train go around the curve. 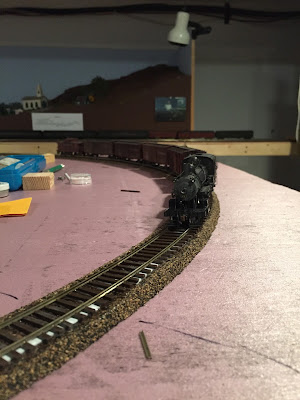 And, believe it or not, despite the fact that the Valley Line was a lowly branch of the New Haven, some of the curves were banked for 50 mph. So a dramatic lean is totally prototypical.

I'd already installed roadbed and had rasped down the transitions between the HO thickness on the main and the N scale thickness on the sidings, so once I got around the curve between Essex and Deep River, tracklaying moved pretty fast.

It's amazing how much you can get done when you replace your pre-work morning workout with model railroading(!) I got into a pretty good routine of getting up at my usual workout time, making a pot of coffee, and getting some more track laid, glued, and weighted. And by the time I got home at night - provided I didn't have to work late - I was able to move on to the next section, which would be dry by the next morning.


As you can see, I really got into a good groove for finishing the track from the liftout (between the Saybrook Wye and Essex) to Shailerville Bridge, but it still took a while waiting for things to dry/cure/set between steps. That's where getting an hour in in the morning before work really made a difference. With that "extra" time, I could get twice as much done during a particular day. The result was a lot of progress in a short period of time.

So I'll close with these last few pics of the finished mainline from Essex to East Haddam . . .