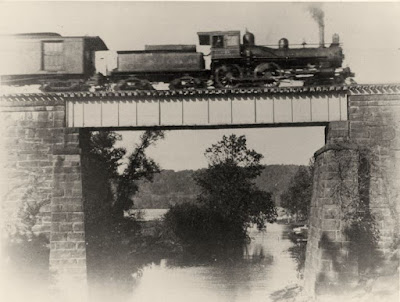 One of the signature scenes on my railroad is going to be the Shailerville bridge in Haddam, CT. As pretty as the Valley Line is, meandering its way alongside the Connecticut River, it isn't all that dramatic and the high bridge at Shailerville is arguably the most dramatic feature of the line. Click here for a more detailed introduction.

The other reason I wanted to model the Shailerville Bridge is that it figures prominently in the opening credits of the Doris Day movie It Happened to Jane which was filmed primarily on the Valley Line in the late 1950s.

Or so I thought.

It's pretty standard fare 'round these parts to refer to the Shailerville Bridge as "that bridge that's in the opening credits to It Happened to Jane" - so much so, that it's become "common knowledge" that that's the fact.

Problem is, it's not.


I recently found the movie (at least the opening credits - all I really needed) in order to get some additional - and color - images of the bridge I plan to model. The bridge in the opening credits is definitely carrying "the ol' 97" (nee NHRR J-1 #3016) and its train over some waterway. But that waterway isn't Mill Creek. And that bridge - with its center pier - isn't the bridge at Shailerville.

This type of discovery is part of the, um, "charm" of prototype research - but it certainly won't keep me from modeling the Shailerville scene as planned.

But do any of you have any idea which bridge is in the opening credits of IHTJ?? Inquiring minds wanna know!
Posted by Chris Adams at 12:01 AM