So, with all these bits of prototype information, here's the area where the scene needed to go: 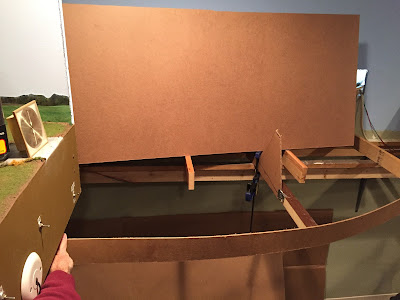 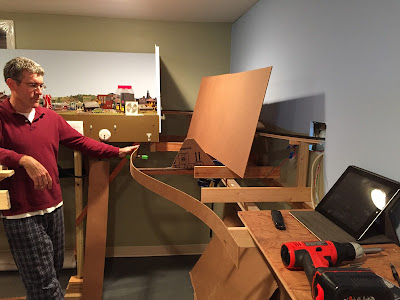 As you can see, we mocked up the backdrop and fascia to get a sense of the scene and how it would impinge on the aisleway. 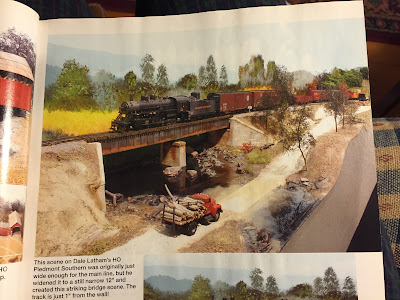 And I just happened to find this photo for inspiration which shows how another modeler dealt with a very similar scene.

At the end of Part 1, I mentioned needing to change the grade to get the mainline from Middletown to match the level of the bridge. Click here for the story of how I did it. The photo below shows me gluing down the track - and gives you a good idea of the constraints I was working with (and in). 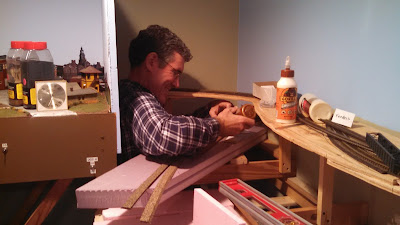 After doing a general mockup of the scene and taking some measurements, Bill took some foam home and started roughing in the terrain and abutment supports.

Here's what it looked like when he brought it back a bit later: 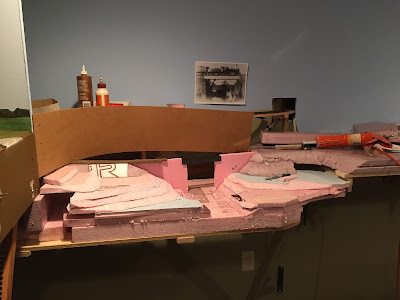 The bridge is an unmodified Micro Engineering 50' deck girder, so no big mystery to that. But I really need to see if Bill would be willing/able to describe a bit how he went about modeling the abutments themselves. All I know is that he used some stone-embossed styrene sheets he'd discovered in England and glued them to the foam formers he, um, formed.

Here's how the scene looked after adding the stone sheets (as always, you can click on the image to make it larger): 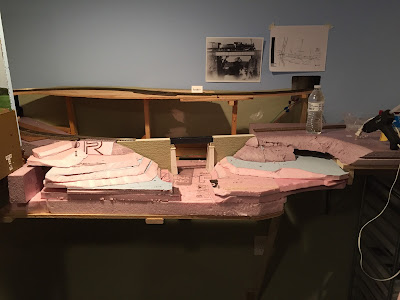 And with a section of backdrop placed behind it: 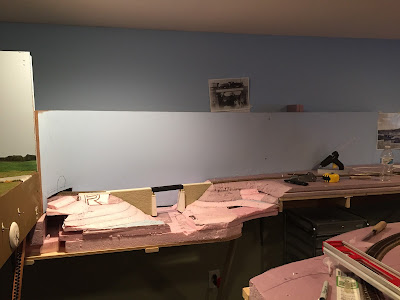 I have to say, I had no idea the stone styrene sheet could be made to look anywhere near as good as a hydrocal casting (a la New England Brownstone), but apparently it's all in doing the coloring right. And Bill is a true artist when it comes to that. I, on the other hand, am colorblind. Literally.

Here's the bridge scene with the abutments colored - and a couple photos temporarily taped to the masonite backdrop for some depth: 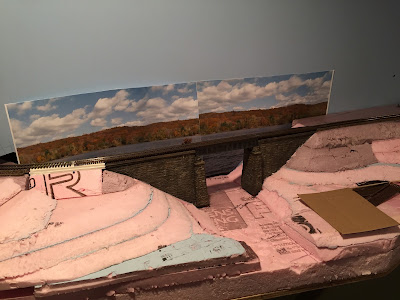 And, finally, a photo comparing the model to the prototype, so far: 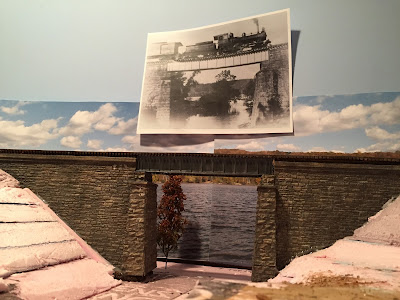 I think it looks pretty fantastic - and can especially say so since this was all Bill's doing. Thanks Bill!

Obviously, this scene is far from done. But what it DID finish was the mainline(!!). Yes, in all the hubbub of my construction frenzy - not to mention working on another part of the layout while Bill was installing the bridge track - it totally failed to dawn on me that the railroad itself was nearing completion. I had no idea until Bill announced - "wanna try running a train over it?"

We'd been working so fast and so focused, we didn't bother with a formal "golden spike" ceremony. So, in lieu of that, here's a video of the first train over Shailerville bridge - and, incidentally, the first train to make it from Old Saybrook to Hartford on the Valley Line!