Now that the control panel is all up and mounted, here's how I wired it up. . .

I needed to power 14 switch machines, including 2 crossovers which would have to be wired together so that they would throw together. The control panel would be on a wall on the other side of the (small) room from the layout & machines - about 8 feet away "as the crow flies" - but as it turned out anywhere from 25-36' away "by wire." In order to keep things cheap economical, I used a 500' spool of plain brown 2-gang (2-wire) lamp cord to provide the power from the panel to each machine. Each wire is also 18 gauge, so should be large enough to carry enough current that distance without too much voltage drop. 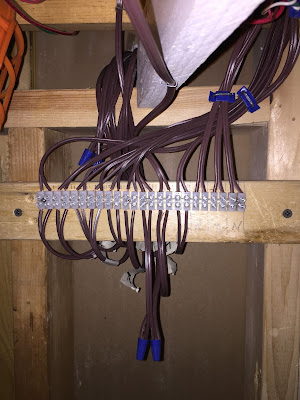 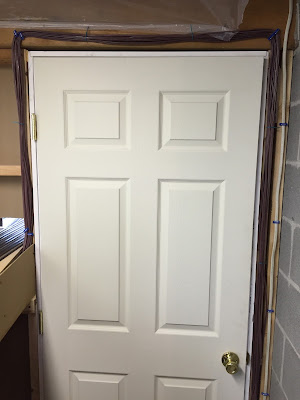 I ran what turned out to be 25' of wire from the terminal strip, up & over the door between the staging yard room (shop area) and the layout (as above) . . . 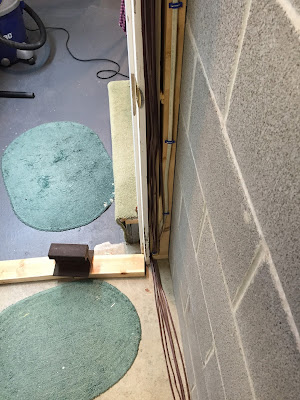 . . . then punched through the doorframe and bottom of the stairway . . . 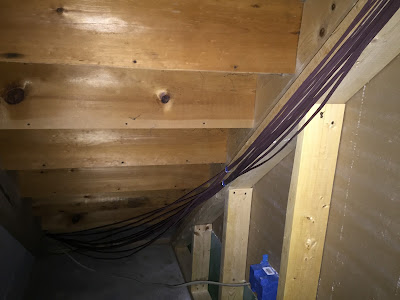 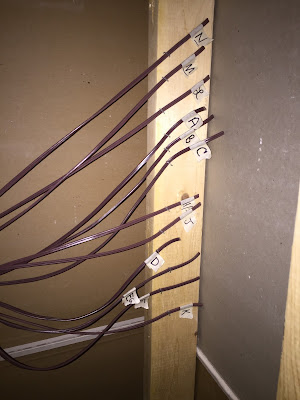 . . . to the back of the wall where the panel would be mounted. And then repeated the process 12 times (thanks to Pete for LOTS of help with this part of the project!) In the photo above, you can see that each wire is labeled - I ran one at a time in order to keep track of them all (I couldn't expect to have found 12 different colored wires - especially being color-blind!).

So that concluded all the wiring between the layout and the panel location. Now, back to the panel itself. . . 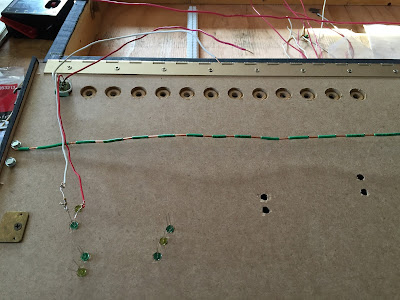 You may recall my (what turned out to be a minor) debacle whereby I discovered that the panel was too thick for the toggles to be mounted. As you can see above (and read about here), I used a spade bit to rout out where the toggles would go. The pic above shows the first wire of the power bus installed (the green wire going right-to-left with insulation removed where the wires to the toggles would be attached), the first toggle installed, and connection to the first pair of LEDs. Click here for details on how I wired the LEDs to indicate switch machine direction (polarity). 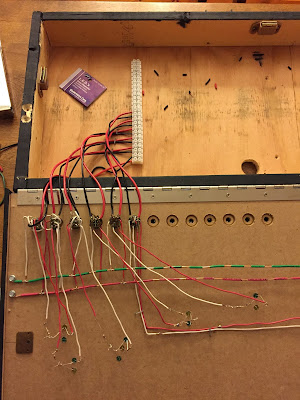 To keep everything neat and organized - and to make it MUCH easier to connect all my lamp cords later - I installed another terminal strip inside the control panel cabinet. Wires from the toggle to the switch machines get connected to this terminal strip. You can also see in this pic the other power bus (the red wire) and the remaining connections (short wires going from the power bus to the toggles), as well as wires to the terminal strip and LEDs. 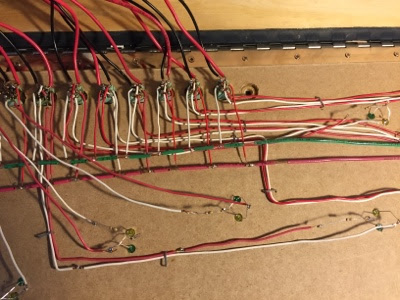 Here's a closeup view of all the wiring completed. I still have no idea why I drilled that 13th toggle hole - or why I took the time to rout it out - when it wasn't needed. Oh well. 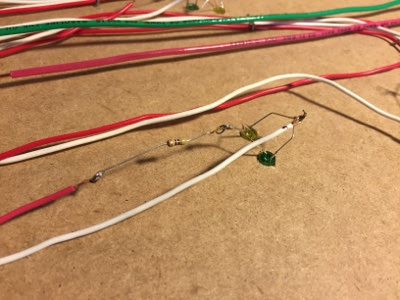 I've made mention of the power bus a couple times already. Power comes from the DC terminals of an old 12v MRC power pack I picked up at a local hobby shop for $5. 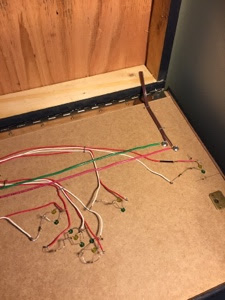 I used lamp cord (again, since it has the two wires) to go between the power pack and the two 14ga bus wires inside the control panel cabinet which run along the length of the panel (see above). The lamp cord is connected to the bus wires via two screws (poor man's terminal strip) . . . 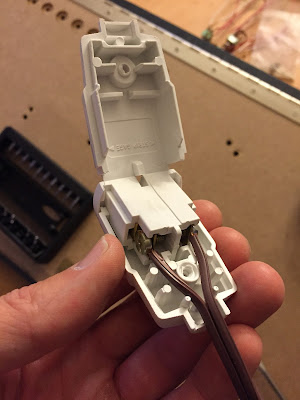 . . . but the other end of the lamp cord is connected to a SOCKET (female part of the plug). 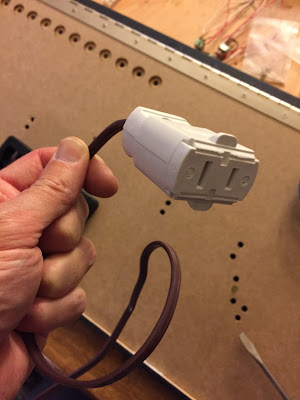 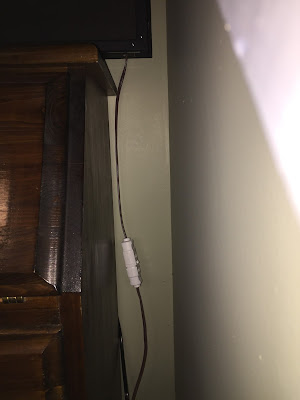 Attach the plug (male part) to the wire coming from the power pack. This arrangement allow me to easily connect & disconnect the power pack to/from the panel. But you want to be sure and use the SOCKET on the panel-side so you (or anybody else) are never tempted (or able) to plug the panel directly into a wall socket, via an extension cord or otherwise. I don't even want to think of the FLASH!!! that would result(not to mention the smoke, and possibly fire).

Speaking of fire hazards, note also that despite the heavy gauge lamp cord and such, there is NO house current going through any of these wires or into the panel. All of the power comes through the powerpack/transformer and is only 12v (& 1 amp) max when it gets to the panel. 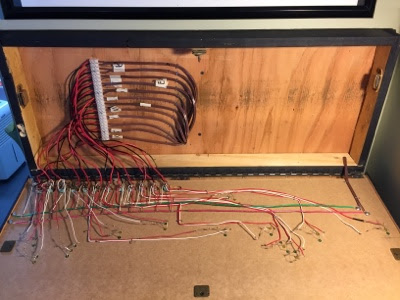 And here's an overview shot of the completed panel wiring. Power comes in through a 1/4" hole drilled through the bottom right corner (and in turn comes from the power pack as discussed earlier) and goes through the bus wires to the toggles. The toggles simultaneously control polarity to the switch machines and alternate lighting of the LEDs. All the wires you saw fanned out under the stairs earlier are coming through a large hole drilled through the back of the panel and through the wall and are connected to the terminal strip. Again, each wire is labeled to keep track of them all (big thanks to Tom for passing them to me from inside the wall!) 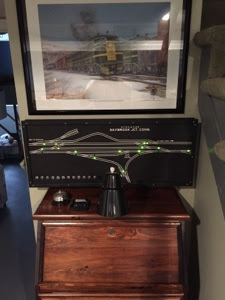 And here's the panel in-service above the Agent-Operator's desk. I'm really proud of how it all came out - especially since having it at all was the result of a (mostly) off-hand remark I made way back when I was first starting the Saybrook scene - "Gee, wouldn't it be cool to have all these turnouts remotely controlled by a tower operator just like the prototype - we could put a panel above the operator's desk over there. We'd "just" have to run some wires to it - should be easy."

Well, I wouldn't say it was exactly "easy" but once I thought it through it was fairly easy work - just a lot of it. I had a couple setbacks along the way, but those turned out to be pretty minor all things considered. And the result is - to my mind - the proof that the work was definitely worthwhile.

I can't wait to get things cleaned up and run some trains through Saybrook Junction - S.S. 102!
Posted by Chris Adams at 7:17 PM