Wiring the liftout between Saybrook and Essex

So, I mentioned my latch fail last time. Here's how I ended up dealing with the liftout. (click here for info on how I built it). 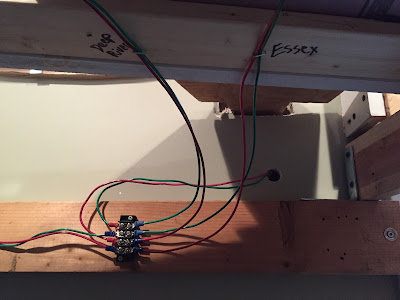 First, I needed to get bus power to it. Since the liftout goes into a wye, and the wye will be electrically isolated from the Shoreline mainline, I have the power coming in from Essex. In the pic above, you can see where I branched off from the terminal strip and went through the wall. 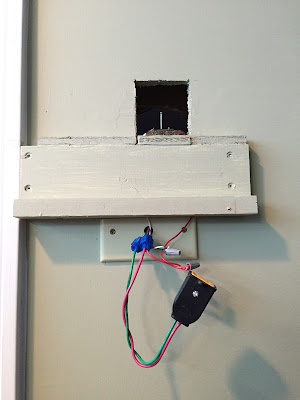 And here's where it came out. I thought using a phone cord wall plate was a neat way to cover the unsightly hole-in-the-wall. The two 14ga bus wires fit through the plate nicely, and I was able to install a polarized female plug on the end. I decided on the female rather than the male plug here since it'd prevent it from ever being plugged into house current(!!). You plug something into this outlet, you're only gonna get 18 volts. Even though it would have looked even nicer, I decided not to use a common wall outlet/plate arrangement for the same reason. I didn't want it mistaken for an actual outlet.

You can also see in the photo above how I connect my feeders to the bus using suitcase connectors and wire nuts. If I was going to do this over again, I would have routed the feeders back through the wall and connected to the bus on the other side. It's not too unsightly here though, so I won't bother changing it. 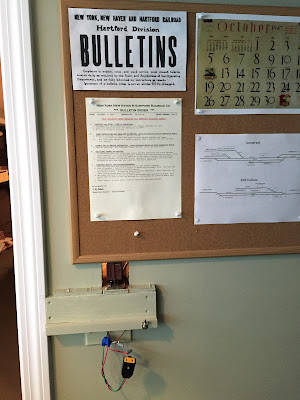 Here's the area with my bulletin board mounted where it was before. Yes, there's enough clearance there. Barely. I'll probably move the board - eventually - and do a short section of photo backdrop around the hole to disguise it a little. 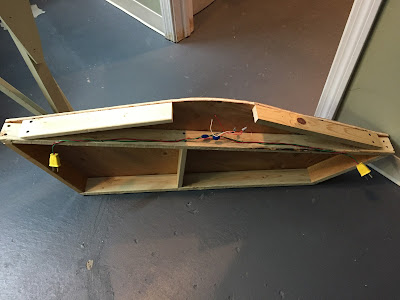 And here's the lifout itself. I covered its construction here before, but I just recently wired it (and just in time for my shake down session last week). All standard stuff: 14 gauge busline with 18ga pigtails connected via suitcase connectors; 20 ga feeders soldered to the rails and connected to the pigtails with wire nuts. All stapled neatly. Polarized male plugs on the ends. I recognize I run a risk (albeit, hopefully, a small risk) that I - or someone else - may try plugging this thing into a wall outlet. That would be bad. But, again, unlikely.

Quick note: It may not be obvious, but I'm using polarized plugs and sockets (the ones with one spade/slot larger than the other) so that I don't get my bus wires crossed. Literally. 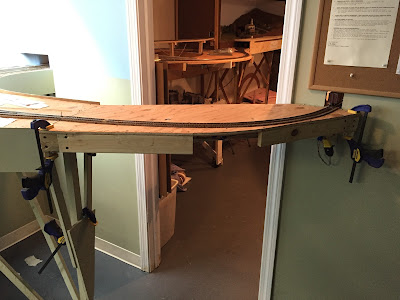 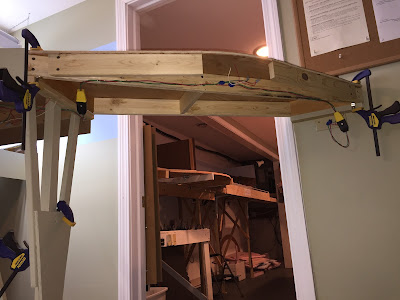 Here's the liftout installed and connected. Doesn't take but a few seconds. Certainly not as quick and elegant as other solutions, but certainly easier. And - most importantly - it's done.